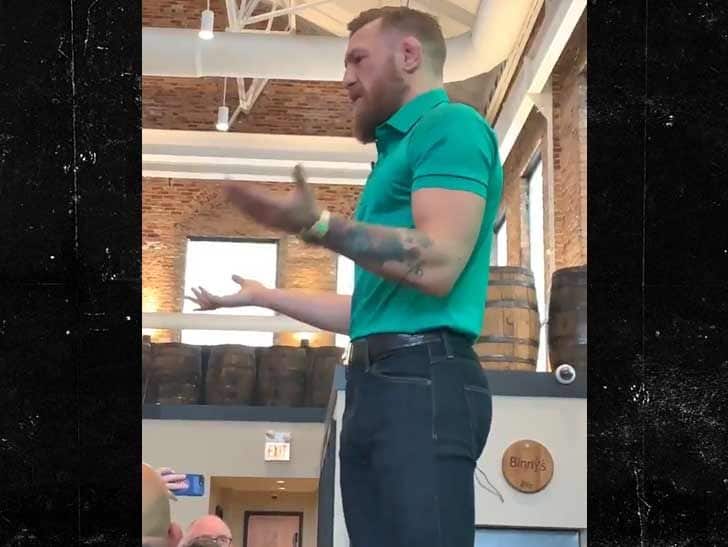 Conor McGregor says he has no problem being the CO-MAIN event of a future UFC card — he just wants Dana White to give him OWNERSHIP in the brand before he returns to the Octagon.

Of course, UFC legend Donald “Cowboy” Cerrone recently claimed McGregor refused to sign a fight contract unless their fight would be the sole MAIN event.

The issue … neither Cowboy or Conor hold a UFC title at the moment and Dana White has said they want every major card to have a championship fight in the main event slot.

Enter McGregor … who finally broke his silence on the issue Friday while speaking with fans at a bar in Chicago, Binny’s — saying, “I’m ready to fight, I’ve said that. No problem.”

But, Conor says he doesn’t want to fight for a paycheck anymore … he wants a legit stake in the company, as he’s demanded for years.

“Me sliding into the co-main event it’s boosting [the UFC’s] brand over fighter rhetoric that they have. And, here’s no problem with that,” Conor said in video captured by BJPenn.com’s Mike Pendleton.

“If they want me to push that and I have no problem pushing that, give me my rightful shares in the UFC company. That’s all I ask.”

“You can put me on the first fight of ESPN+, no problem … let’s see how it goes … but I’m still prepared ready to fight.”

Conor has demanded ownership in the UFC for years — and at one point, UFC minority owner Mark Wahlberg offered him a piece of his stake in the company.

Wahlberg later rescinded the offer. But, ya gotta wonder if the UFC is considering Conor’s demand with the kind of money McGregor’s fights bring in.