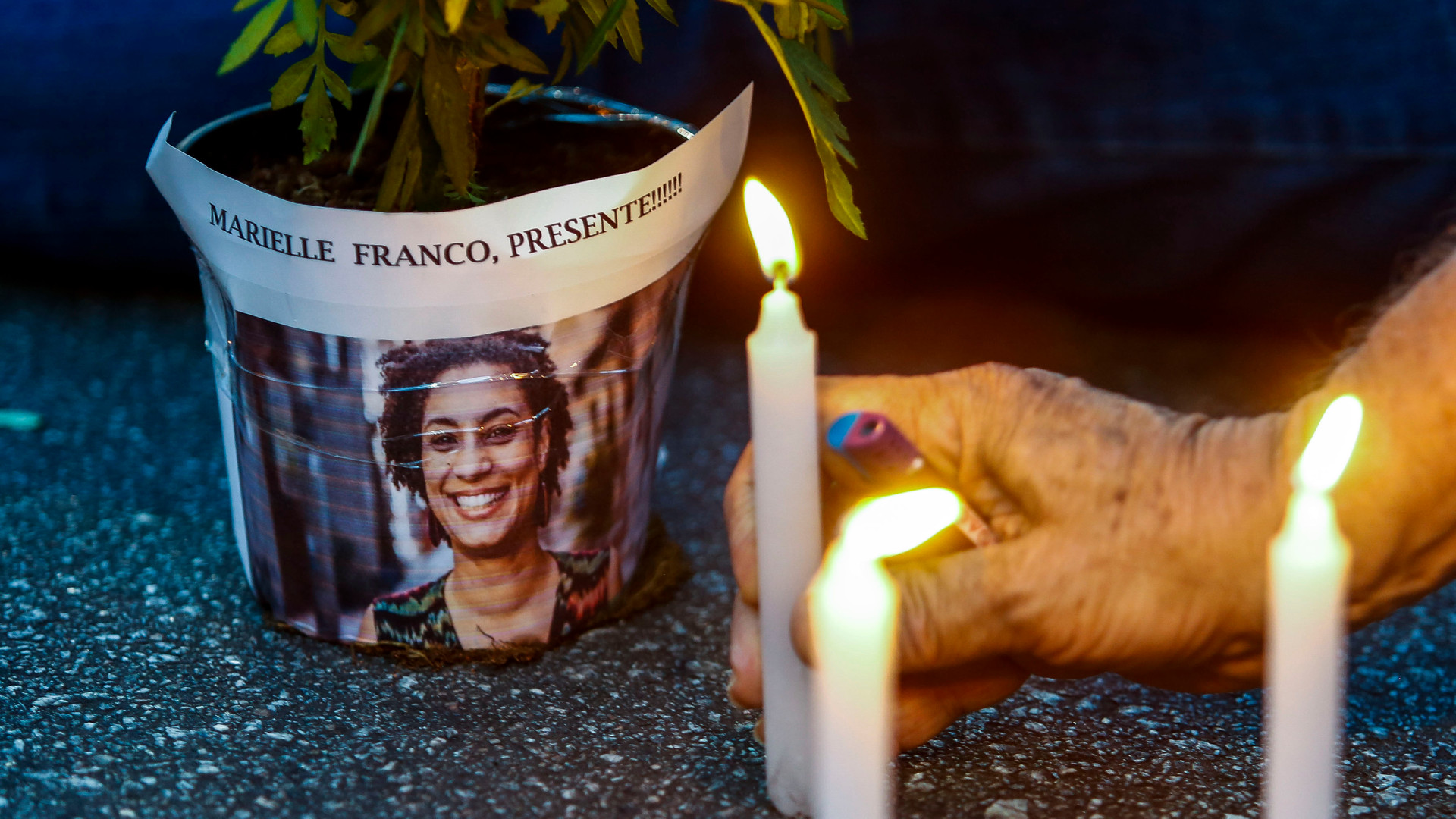 Brazil’s far right President Jair Bolsonaro on Monday night brushed off suggestions that he might have ties to the men charged with murdering Marielle Franco, a prominent city councilwoman in Rio de Janeiro, who was gunned down last March.

Franco, 38, was a rising political star who frequently called out police brutality and advocated for women and LGBTQA groups in Brazil — groups which Bolsonaro has denigrated repeatedly. The night Franco was murdered she was returning home from an event about empowering black women when her car was sprayed with bullets, killing her and her driver instantly.

Last week, two former police officers, Élcio Queiroz and Ronnie Lessa, were arrested and charged with Franco’s murder. Prosecutors claimed Franco was “summarily executed for her political activity in the defense of the causes she defended.”

Soon after the arrests however, a number of alleged links to Bolsonaro began to emerge. Queiroz was pictured with the president, while Lessa was found to have lived in the same beachside complex as Bolsonaro prior to the president’s electoral victory. According to police, one of Bolsonaro’s sons had also allegedly dated the second suspect’s daughter.

“The worst photograph in Jair Bolsonaro’s life” https://t.co/68EhLA9VTn This image is starting to circulate in Brazil. It appears to show Brazil’s far right president with 1 of men arrested this morning for #MarielleFranco murder pic.twitter.com/KMns2EbqVy

In an interview with Fox News on Monday night, Bolsonaro dismissed the idea that he or his family might have been involved with the murder.

“I am a former Brazilian army captain and the military police officers in Rio de Janeiro are to large extent good friends of mine,” he said. “By coincidence, one of these alleged killers of Marielle — he wasn’t really a neighbor of mine, he lived on the opposite side of the street but of course the media that has always criticized me they wanted to establish a clear connection — but I never saw that gentleman in my gated community.”

He added, “What kind of motivation could I possibly have to be the mastermind of some murder like that? I didn’t even know her.”

There is no evidence to suggest that either Bolsonaro or his family are directly linked to the assassination, and there’s no indication that he had prior knowledge of it.

But the case does highlight the uncomfortably close links between the Brazilian president and the country’s militias, which can best be described as paramilitary vigilante groups often made up of former military and police personnel.

Both of the suspects have ties to a militia outlet known as “The Crime Bureau,” which was previously tied to Bolsonaro in a January report by O Globo, a Brazilian newspaper. That report revealed that Bolsonaro’s son, Flávio, a state assemblyman, had employed both the wife and mother of the Crime Bureau’s founder — who himself was a former captain of the Brazilian police’s elite BOPE unit — in his government office.

Franco’s murder, and the desire to find both the shooters and other potential suspects responsible, has become a flash point within Brazil.

“For years we sold a postcard image of paradise, the country of Carnival, of happy, cordial people,” Mônica Benício, Franco’s partner, told The New York Times last week. “The execution of Marielle, and the election of the current president, revealed to the world that we are racist, that we are sexist, misogynist, LGBT-phobic.”

Since his election, Bolsonaro has been criticized for his attempts to crack down on marginalized communities as well as his violent rhetoric. Referencing the country’s low-income favelas — in which Franco herself had been raised and to which she maintained strong ties up until her death — the president last year proposed using snipers to shoot down any favela resident seen carrying a firearm.

He has also said he would be “incapable” of loving a son who was gay and expressed a desire to make it easier for Brazilians to buy guns.

Bolsonaro’s strong-arm policies, along with his promise to make right-wing reforms to the Brazilian economy, have made him a strong ally of President Donald Trump, whom he is set to meet with on Tuesday.

In his Fox News interview Monday night, the Brazilian president praised Trump and celebrated their similarities.

“We have a great deal in common,” he said. “I have been highly criticized because of this but I will not, of course, deny what I do think. … I’m willing to open my heart up to him, and do whatever is to the benefit of both the Brazilian and the Americans.”