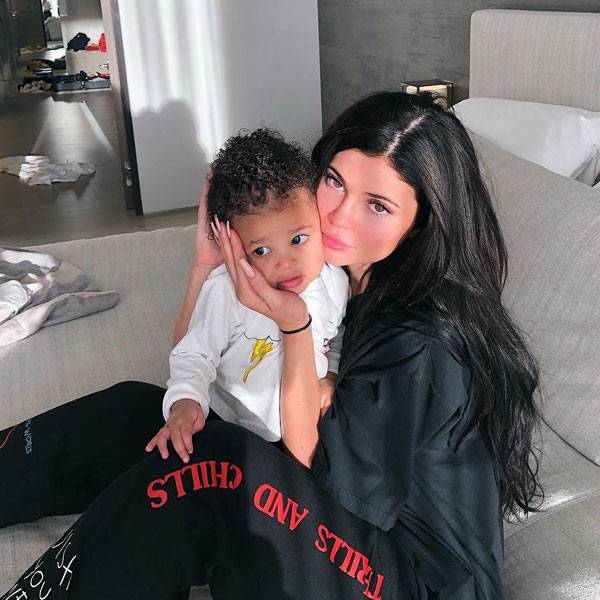 Kylie Jenner and Stormi Webster are spending their Sunday relaxing and spending quality time together.

The 21-year-old shared a photo on Instagram of herself and her daughter laying down in what looks like a bounce house together. They’re both clad in their bathing suits and totally soaking up the sun and warm Los Angeles weather. Stormi looks more than comfortable as she lays on her mom’s stomach with her head on Kylie’s chest.

“my baby is stuck to me like glue lately,” the Kylie Cosmetics owner captioned the sweet photo. Kylie also posted a photo of the two of them sitting on a lounge chair by their pool. It looks like the ideal Sunday!

She posted another photo of herself with her daughter yesterday, perhaps after another day taking in the weather. “Baby girl,” Kylie described the snapshot.

On Wednesday, the self-made billionaire shared with the world the name she almost gave Stormi, but not all of the options on her and Travis Scott‘s list.

“One name I will tell you guys, because I don’t think I’m ever going to name my daughter this (another daughter), but I wanted to name her Rose,” she explained on Instagram Live.

Kylie said she “really liked the name” and then gave a “shout out to everyone named Rose.”

It also turns out the root “Storm” was always in her mind, but she wanted her daughter’s name to match her own with the last syllables. “When I was pregnant, I used to call her ‘Stormie’—when I would talk to her in my belly. It just always felt right,” Kylie added.

She “couldn’t imagine” any other name for her daughter. Stormi’s name doesn’t have the “e” at the end like her mom, and Kylie divulged that it was a “last minute” move when she was finalizing her daughter’s birth certificate.

Just one day before giving fans a behind-the-scenes scoop on her daughter’s name, the beauty mogul showed off her toned stomach on social media. “I’m proud of my little tummy,” she captioned it.

She explained to her followers on Instagram Live that her “little tummy” all came from a healthy diet. She had been open about wanting to lose 20 pounds after giving birth.

“I always had a really flat stomach, but I never felt it went back to before Stormi until recently. And I feel like it has a lot to do with diet,” Kylie said on Instagram Live. “Like, I really eat very crazy usually, like whatever I want—pizza, pasta, a lot of diary, and I just kind of cut that all out, and have just been eating better, and I feel like that’s the trick for me, personally.”

All of that helped her “feel back to myself again.” Plus, she’s got her “groove back.”