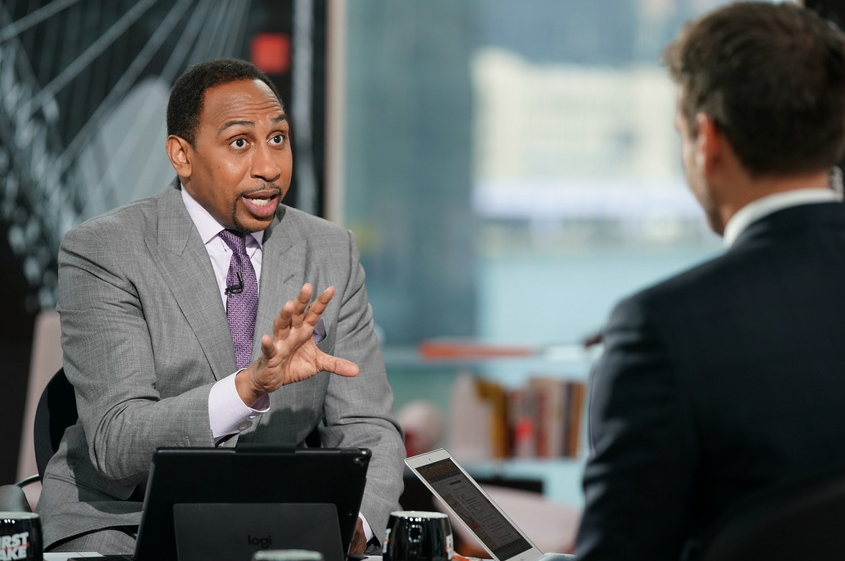 AllHipHop has a special, exclusive interview with Stephen A. Smith, who tells us everything from his Top 5 rappers, his love of Hip-Hop, the importance of Black Journalist and more.

(AllHipHop Features) Stephen A. Smith is one of the most accomplished and popular media personalities in the sports industry today. With a relentless work ethic, he has carved out a unique space as one of the foremost authorities in the realm of sports. Daily, you can catch his opinions about sports, race, politics, and everything else under the sun on ESPN’s First Take, The Stephen A. Smith Show on the ESPN news channel and ESPN Radio, giving commentary on the NBA, and he even has a recurring role on the legendary day-time soap, General Hospital.

I talked with Stephen A. about his recent NAACP Image Award nomination for Outstanding Talk Series for First Take, the important role of African American journalists today, growing up as a Hip-Hop head in Queens, NY, and his top 5 favorite rappers of all-time.

AllHipHop: Without question, you are one of the most active and visible media personalities in the world of sports. How do you balance everything?

Smith: I do what I love to do. I mean, to me, it’s not a job. It’s a lifestyle. If I was rich and didn’t have to do this for a living, what would I be doing? I would be going to games. I would be a sports fan. So, I do what I love to do. And I think that it has a lot to do with why it seems like I’m juggling so many things. It’s what I naturally do, day in day out and night in night out. It’s a lifestyle. It’s a quality of life is not just a job.

AllHipHop: As a graduate of Winston Salem State University, an HBCU, how did that experience shape you and how does it inform your work today?

Smith: Well, first of all, when you go to the historically black college like Winston Salem State University, you know that the odds are not necessarily stacked in your favor by the dominant culture. To recognize the fact that when you go to an HBCU, you have a lot to prove because the corporate America that awaits is predominantly run by white America. And they’re not necessarily looking at HBCU students thinking that you’re going to be the crème de la creme. And so, for me, I’ve always had an aspiration to be recognized as one of the best at what I do. But in the in the process of doing that, representing my community as best as I possibly can, making sure that, you know, that I’m empowered, and my community is as well.

When you come from a minority community, when you come from a disenfranchised community, do I feel I have an obligation to make sure that at the very least our voices are heard, and our perspective is taken into consideration? You damn right I do. I’ve always had that mentality even before I arrived, and once I got to Winston Salem and playing for the legendary Coach Clarence “Big House” Gaines, I was inspired even more. So being an HBCU alum, it’s a badge of honor, a mantle, a responsibility that I’ve carry on my shoulders and I’m unapologetic about it.

AllHipHop: Even your explanation on your show about the Russel Westbrook indecent in Utah and why his was so angered by the offensive remarks of the fan. You really laid it out on your platform for the general audience to understand it all from a Black perspective.

Smith: Right. So, whether they agree or disagree, my obligation that I personally feel is to make sure that our perspective is heard. And then you can feel whatever you want to feel. But there was a time in history when our voices were not heard. So, for me, that’s always the approach that I have.

AllHipHop: Being a NAACP Image Award finalist for Outstanding Talk Series must be a tremendous honor for you. What would capturing a NAACP award mean to you?

Smith: I’d be lying if I said wouldn’t mean a lot to me. Because obviously, when you consider the history of the NAACP and all the work that has been done, to bring attention to the trials, and tribulations, the plights and ultimately the accomplishments of our community, it’s near and dear to my heart, from the standpoint. But just being nominated is validation enough for me. It means that I’m doing something right.

AllHipHop: Can you speak to why African American journalists, broadcasters, beat writers are so important in today’s setting?

Smith: We must have stories being told from our perspective. See, with social media, TV access, and web sites and what have you, essentially, anybody can have a voice. It’s just a matter of how much you resonate to the masses. Back in the day when I was coming up from in 80s to the 90s to this new millennium, you had to work and grind for years before you had the license to give your opinion. That’s why I’m so big on my resume. I don’t care what people have to say about me. I don’t care what the critique is. All I ask is that you remember, my resume. I started off as a high school writer. I interned at four different places and got promoted 11 times in my career. When I was promoted to a general sports columnist for a major metropolitan newspaper in March of 2003, I was the only 21st African American in this nation’s history to have the license to editorialize on sports, at a major publication. So, what I’m saying is, is that I had to earn the right to have a debate show to express my opinions and all of this other stuff. There was no Twitter, Facebook, and Instagram and all of this other stuff. You didn’t have an avenue to express your opinion that could easily be disseminated to millions of people in a matter of minutes.

When you consider that the fact that the world of sports today as it was the case back in the day with 70% NFL players, Blacks making up 80% of NBA players Yes, I know they have their own voices. Yes, I know that they can express themselves to millions without ever having to deal with the media. But it still doesn’t dilute or minimize the importance of Black folks in media giving people the perspective emanating from minority communities particularly when you’re working for a respectable publication, or network.

I work for ESPN. I had to grind and bust my ass get to the point. Before that. I was at Fox and while I was at Fox, I was at the Philadelphia Inquirer. Before that, I was at the New York Post Before that, I did internships in Archdale, North Carolina and Winston Salem, North Carolina. I worked for Roadways in Curtisville, loading and unloading 18-wheeler trucks while I was taking 18-credit semester hours, and working part time for the newspaper. I didn’t just get here. I grinded for many, many years, and put in the work.

What I’m saying is that when you do all those different things, particularly when you are an African American, your resume is incredibly, incredibly important. Because a lot of the folks may try to dismiss me, and just some loud mouth bloviating about the world, sports, politics, social issues and things of that nature, it’s up to the Black community to remind everybody nah, nah, not this one. Y’all don’t get to do that. Because he went through everything yall said he had to go through to go through to get to this point and he’s painting y’all at your own game.

AllHipHop: How do you handle your critics who may think your views are controversial?

Sometimes, we can’t accomplish that by smiling at people, shaking hands, giving them hugs, and singing Kumbaya. That won’t cut it. Sometimes it’s about giving them hardcore truth about what’s really out here and what really is necessary to overcome the obstacles ahead.

Which is why I’m incredibly confident because I think most people who go up against me, they’re just doing a job, but I have a mission. So, if I have a mission, nobody with the approach of “Oh, I’m just doing, my job,” is going to be able to conquer me. And that’s just my mentality.

Smith: I was born in the Bronx and we moved to Queens when I was a year-old.

AllHipHop: Tell me how you were tracking Hip-Hop as it was a coming of age in the early 80’s with a Run-DMC, LL Cool J coming from Queens?

So, when Run-DMC was climbing the charts, I was right their loving the culture. I was a little bit younger than them so, they didn’t really know me, only Jam Master Jay knew me personally because of his relationship with my brother. I would get to know DMC and Run later.

LL Cool J grew up five minutes away from me on Farmers Boulevard. So, L.L. and I met one another face to face for the first time, about two or three years ago, and we couldn’t believe it. Like, you know, “Damn, I’m from Hollis, and your was from Farmers.” We grew up that close to each other. So, I’m from that generation. Run DMC. KRS-One, Kool Moe Dee when he was battling L.L., Heavy D and the Boys are some of my favorites when I was coming up in Queens. I grew up listening to those guys, and even before that Kurtis Blow was one of my favorites.

AllHipHop: What’s the latest Hip-Hop album that you’ve been listening that you really dig?

Smith: I love my brother 2 Chainz’s new project Rap or Go To The League that recently come out. I think it’s some of his best work.

AllHipHop: How do you feel about Hip-Hop’s impact on popular culture?

Smith: What I appreciate most about Hip-Hop artists is that they are incredibly, incredibly courageous. They’re so courageous in telling their stories. I think it’s beneficial to us as a society because it gives society an indication whether it’s in the activism, whether it’s rage, whether it’s passion, whatever the case may be, that Hip-Hop culture has a freedom that most of us only wish we could have in terms of using their voices and expressing themselves.

When you listen to Jay Z on “The Story of O.J.” or when you listen to somebody like Snoop Dogg and you see how his career has become transcendent. And then you sit down, and you talk with them and you listen to them articulate themselves and express things from their point of view. It’s extremely enlightening but it’s also a reminder how much they truly love us as a people. I have and always will offer any of my platforms to them.

AllHipHop: Lastly, we all need to know this one. Give me your Top 5 MC list.

Smith: Top 5 rappers? Of all-time? Damn. Let me give you my favorite 5. In no particular order, being that the classification is my favorite. Okay? My favorite. I got Jay-Z, Biggie, Tupac, LL, and Heavy D. They are my favorites.