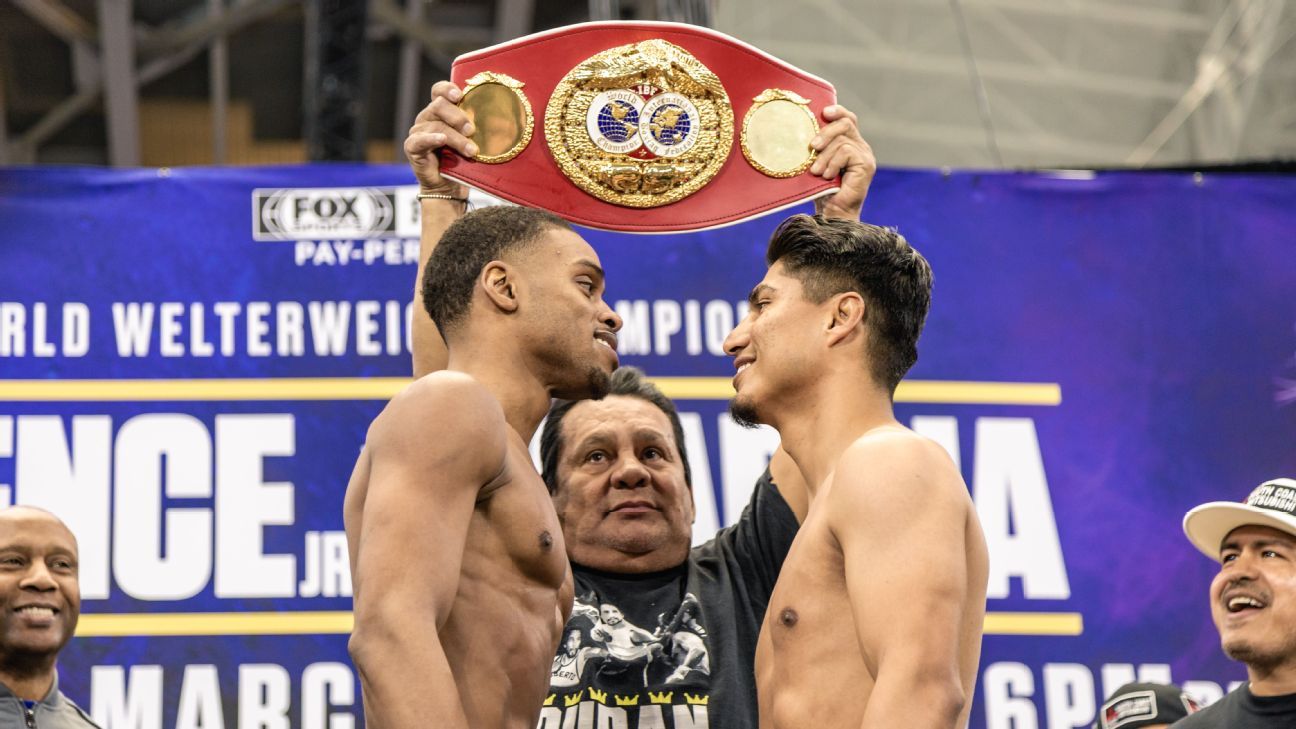 ARLINGTON, Texas — Welterweight world titleholder Errol Spence Jr. said a few days before his defense ageist Mikey Garcia that the fight would be “a one-sided massacre” in his favor. Oh, boy, was it ever.

Spence pummeled the iron-chinned Garcia for the entire fight en route to a shutout decision as he retained his 147-pound belt for the third time before a hometown crowd of 47,525 on Saturday night at AT&T Stadium.

He was bigger, stronger, longer and just better than Garcia, a lightweight world titlist, who called out Spence and moved up two divisions to challenge him in as he dared to be great.

When it was over, Spence called out secondary welterweight titlist and all-time great Manny Pacquiao, who came into the ring to join Spence after the fight. They could meet in July.

The fight began quietly with each probing the other with the jab but Spence landed a few as Garcia backed up. Garcia (39-1, 30 KOs), 31, of Moreno Valley, California, began to assert himself more in the second round, landing body shots and coming forward more in a close round.

In the third round, Spence began to find the range on his straight left hand, sending it down the middle time and again. He also landed a flush left cross though Garcia took it well.

Spence (25-0, 21 KOs), 29, from the Dallas suburb of DeSoto, Texas, began to find a groove in the fourth round. His punches began to flow, including a three quick jabs, a straight left hand and a body shot.

Spence landed some heavy shots in the round, including a left to the chin that stopped Garcia in his tracks.

By the fifth round Spence was dominating, imposing his size and power on Garcia, who was game but could do little.

Spence continued to land heavy shots in the sixth round except for brief moments when Garcia would unload a few ineffective punches.

Spence was in total control through the middle rounds as he continued to fire jabs and body shots and slam left hands off Garcia’s head. Whatever Garcia’s game plan was it was not working. At all. But he showed a durable chin to take so many hard shots.

Spence, seemingly convinced Garcia could not hurt him, was all over him in the ninth round. It was a cascade of hard shots with almost nothing of consequence coming back at him.

Garcia was almost staggering around in the ring as Spence unloaded on him.

As Spence continued to hammer Garcia in the 11th round, referee Jon Schorle took a close look but let the beating go on and on. It was more of the same in the final round as Garcia somehow managed to remain on his feet until the final bell.

But it was not to be. Despite Garcia’s claims that the size difference would not be an issue it was for sure as he could not deal with Spence’s physicality.