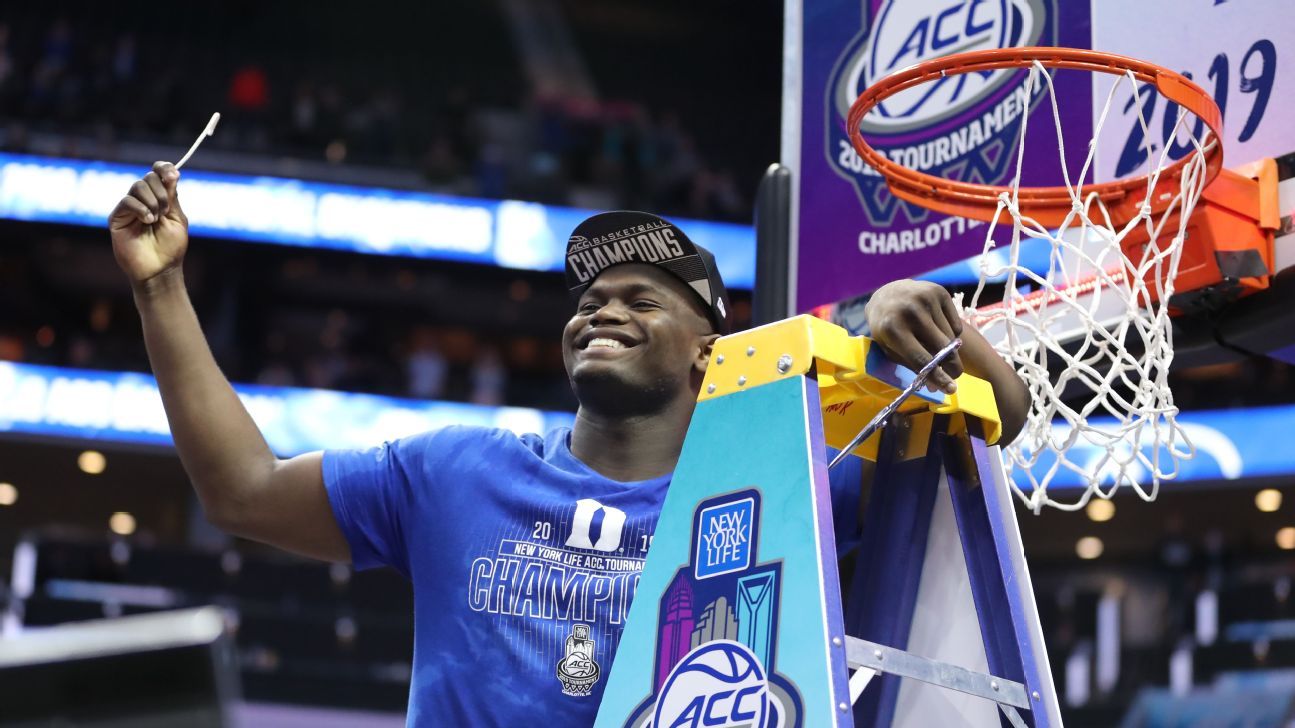 CHARLOTTE, N.C. — Zion Williamson‘s knee is feeling just fine, and for three days in the 2019 ACC tournament, he offered proof.

His 21 points, five rebounds and two assists — one of which will go down as arguably the most impressive highlight of Williamson’s spectacular season — in Saturday’s 73-63 championship game win over Florida State secured him the tournament MVP honors and, quite likely, secured Duke the top seed in the NCAA tournament.

It’s a long way from where Williamson left off, clutching his knee on the court at Cameron Indoor Stadium a month ago.

“Those six games I sat out,” Williamson said, “to see your brothers battling and there’s nothing you can do but sit on the sideline and cheer, I’m not that type of person. I wanted to be out there with them.”

Everyone saw the shoe explode. Former president Barack Obama was in the stands for the game, pointing in amazement at the equipment mishap that felled college basketball’s biggest star. In near real time, dozens of other celebrities and countless armchair advisors stated the obvious: Williamson had done enough. The injury was evidence the future No. 1 pick in the NBA draft, the guy Forbes Magazine suggested could earn a billion dollars in his professional career, didn’t owe Duke another minute on the court.

What everyone missed, however, was the scene that unfolded in Duke’s trainer’s room. Doctors told Williamson he could return to the game, if he was up to it. He tried jogging. It hurt. Tests later showed a Grade 1 sprain. He told his stepfather he was done for the day.

Then Williamson’s mom entered the room, and the magnitude of the injury came into focus. His first crack at Duke’s biggest rival ended in less than a minute. His college career could be over, too.

“I just broke down,” Williamson said Saturday, a string from the net at the Spectrum center tucked behind his ear and a sweat-soaked ACC champions T-shirt clinging to his chest. “I dreamed about that game for so long, and I just felt like I lost so much. I just cried in her arms.”

His mother hugged him, told him to keep the faith. Then she made a promise.

While the rest of the world wondered why Williamson would risk playing for free when so much awaited down the road, that promise was all that mattered to him. And after Duke wrapped Saturday’s tournament title game, Williamson found his mother, looked her in the eye, and told her he loved her.

Williamson said throughout this season that the current NBA rule, which forces players to wait a year after high school before entering the league, had no impact on his decision to come to Duke. He’d be here either way. And even in the aftermath of the injury against North Carolina on Feb. 20, he never wavered from that plan.

“Obviously we all had our thoughts,” said Cam Reddish, another Duke freshman with NBA plans after his season wraps, “but the kind of guy he is, we knew he was going to come back.”

Truth be told, Williamson said Saturday, he could’ve been back sooner. Duke lost that first game to North Carolina after Williamson departed, then dropped two of its next five, struggling without its centerpiece. Williamson wanted to get back to work, to plug the holes that suddenly seemed to crop up everywhere on the court. Mike Krzyzewski wouldn’t let him.

“I wouldn’t have been myself,” Williamson said. :”So, they said to get in better condition, and that’s what I did. It paid off. I feel back to normal.”

Three games in three days tested the knee. Williamson played all but 4 seconds of Saturday’s title game, wearing a modified pair of Nike sneakers the company designed in a matter of days to suit the needs of a player who, by rule, can’t offer the slightest endorsement of their product while he remains at Duke. Never mind that the company’s stock plummeted after the injury, with Nike losing more than $1 billion in value because the shoe exploded on national TV, and a superstar felt the brunt.

Didn’t that underscore the inequities of this system? That’s a debate left for someone else, Williamson said. For him, the only thing that mattered was getting back on the court, getting back to his teammates, getting back to doing the one thing he truly loves to do.

After Friday’s game, Williamson lamented the constant scrutiny and attention. A stop off at the gas station takes 10 minutes for autographs and pictures, he said. He can’t use the bathroom in peace.

“I looked myself in the mirror and said, this is the life I wanted to be a part of,” he said. “Sometimes you take a step back and say, ‘Wow, I guess I’m in it.'”

Surrounded by cameras and microphones after Saturday’s win, he offered the other rationale for returning to the court. Away from the game, this hysteria that surrounds him can be overwhelming. On the court though, it’s all still simple.

So yes, he’s back. He’s back to dunking, back to winning, back to doing things that seemed near impossible — like the half-court bounce pass he delivered to Tre Jones on Saturday that left the entire college basketball world breathless. Even Williamson was impressed by that one.

“I kind of looked at my arm,” he said, “and I was like, thank you for getting that pass through.”

Williamson figures to remain a centerpiece of the debate about paying players, amateur endorsement deals and NBA eligibility. It’s inevitable for a star of his stature.

On Saturday, however, he just wanted to talk about that pass, and about his mom, and about this win that he’d been waiting for even when so many others thought he’d be crazy to chase it.