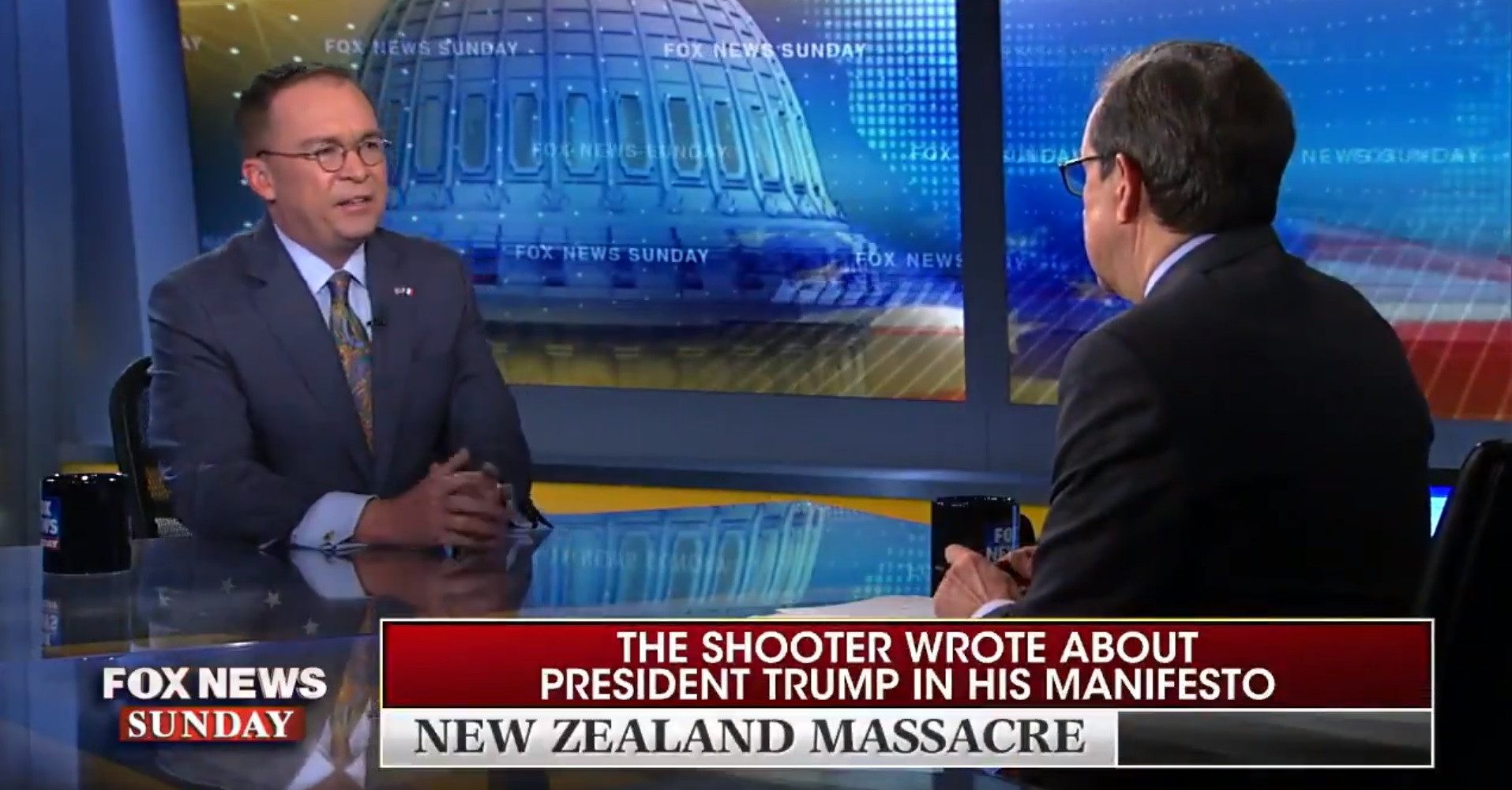 Defending President Donald Trump against charges of white supremacy is a thankless and never-ending job, and it is apparently grating on the nerves of acting White House chief of staff Mick Mulvaney.

Appearing on Fox News Sunday, Mulvaney bristled at having to answer for his boss in the wake of Trump being mentioned in the manifesto linked to the gunman who killed 50 people last week at two mosques in New Zealand.

“The president is not a white supremacist,” Mulvaney said, responding to host Chris Wallace’s question about the shooter’s apparent support for the president.

Police are examining a lengthy, rambling document reportedly written by the shooting suspect, Brenton Harrison Tarrant, who identified himself as an “ethno-nationalist eco-fascist,” a term that’s been described as white nationalism. In his statement, Tarrant argued that left-leaning politicians are “presiding over the continued destruction of the natural environment itself through mass immigration and uncontrolled urbanization.”

The document also noted that Trump is a “symbol of renewed white identity and common purpose” with white nationalist objectives, but rejected the U.S. president as a “policy maker and leader” for his cause. “Dear god no,” Tarrant wrote.

Mulvaney seized on that part of the manifesto as proof that it’s just as “absurd” to label Trump a white nationalist as it would be to call Democratic leaders terrorists for their support of environmental policies that Tarrant opposed.

“I’m a little disappointed you didn’t put up the next sentence,” he said, “‘What about for his policies and as a leader? Dear God, no.’ I don’t think it is fair to cast this person as a supporter of Donald Trump, any more than it is to look at his ‘eco-terrorist’ passages in that manifesto and align him with Nancy Pelosi or Ms. Ocasio-Cortez,” Mulvaney said, referring to the House speaker and Rep. Alexandria Ocasio-Cortez (D-NY), both Democrats.

“This was a disturbed individual, an evil person and any attempt to try to tie him to an American politician of either party probably ignores some of the deeper difficulties that this sort of activity exposes,” Mulvaney added.

When Wallace noted that Trump was specifically mentioned in the document — not Pelosi or Ocasio-Cortez — and asked if Trump was planning a speech to condemn anti-Muslim white supremacy, Mulvaney voiced exasperated frustration at having to defend the president.

“The president is not a white supremacist,” Mulvaney replied. “I’m not sure how many times we have to say that. To simply ask the question every time something like this happens overseas or even domestically, to say, ‘oh my goodness, it must somehow be the president’s fault,’ speaks to a politicization of everything that I think is undermining sort of the institutions that we have in the country today.”

But the president’s own comments on white nationalism have fueled, in part, the polarized reactions among political leaders. Indeed, Trump downplayed white nationalism as an international issue, saying Friday that the New Zealand shooting represented nothing more than “a small group of people that have very, very serious problems.”

Critics responded to Trump on the Sunday talk shows, denouncing the president as out of touch on the subject.

Rep. Rashida Tlaib (D-MI), one of three Muslim lawmakers serving in Congress, said on CNN’s State of the Union that the president should offer supporting messages to the global Muslim community instead of sending out offensive tweets.

Trump “is the most powerful man in the world right now,” Tlaib said. “The fact that we continue to stay silent is what’s going to make us as a country less safe.”

Also appearing Sunday on State of the Union, Sen. Amy Klobuchar (D-MN), who is running for the Democratic presidential nomination, demanded that Trump speak out against anti-Muslim bigotry and white nationalism.

“At the very least, he should be giving strong statements, public speeches defending Muslims in this world,” Klobuchar said. “I think it’s on all of us to condemn this hate.”

Mulvaney, however, brushed aside calls for Trump to be more forceful in his denunciation of white supremacy, calling it political rhetoric from people who hate the president.

“There are folks who just don’t like the president and everything that goes wrong they’re going to look for a way to tie that to the president,” he said.