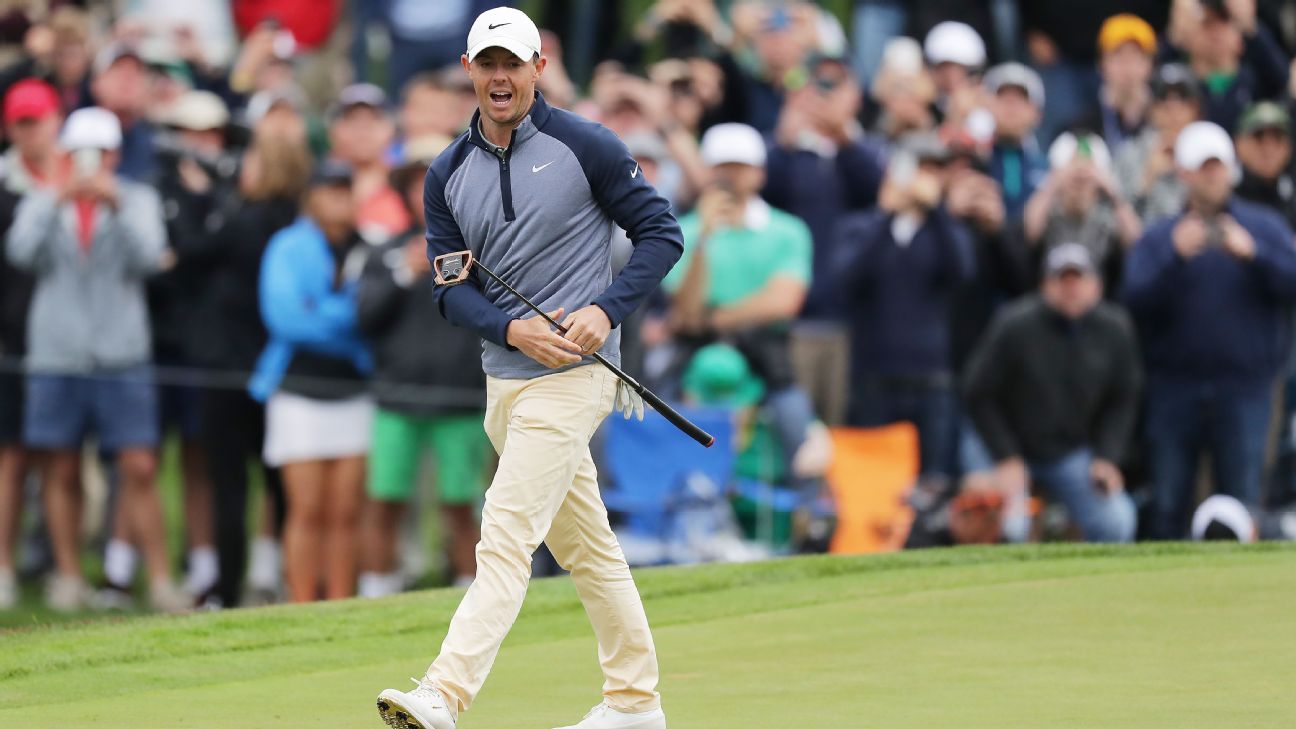 PONTE VEDRA BEACH, Fla. — Rory McIlroy made two late birdies amid the wild theatrics of Sunday at The Players Championship and closed with a 2-under 70 to win the next best thing to a major.

It required a major performance down the scary stretch at the TPC Sawgrass.

McIlroy could not afford to make a mistake over the final hour because of Jim Furyk, the 48-year-old former Ryder Cup captain who nearly pulled off a stunner. Furyk, one of the last players to get in the strongest field in golf, capped off a 67 with a shot so good into the 18th that he started walking when he hit it. It plopped down 3 feet from the hole for a birdie to take the lead.

But not for long.

McIlroy, one of eight players to have at least a share of the lead in the final round, was coming off a bogey on the 14th to fall behind and was in trouble with a tee shot that found a bunker right of the fairway. He responded with his best shot of the day to 15 feet for birdie.

Then, McIlroy hit the longest drive of the round on the par-5 16th, leaving him a 9-iron from a good lie in the rough to set up a two-shot birdie and the lead.

Most important, he found dry land on the par-3 17th, the island green that never looks smaller than on Sunday at The Players.

He was solid to the end on a chilly, cloudy day and finished at 16-under 272 to win The Players on his 10th try.

It might even set up the 29-year-old from Northern Ireland for the Masters next month, the only major he lacks for the career Grand Slam.

“This is probably the deepest field of the year, with so much on the line,” McIlroy said. “I’m thankful it was my turn this week.”

Furyk didn’t know he was in The Players until one week ago, and he was on the verge of winning until McIlroy came through in the end. Furyk started the back nine with two birdies to get in the mix and finished strong. His only regret was a 3-foot par putt on the 15th.

Even so, it showed he has plenty of game left after devoting two years as Ryder Cup captain. The runner-up finish moves him high enough in the world ranking to qualifying for the Match Play in two weeks.

“A shot here, a shot there, maybe could have been a little different,” Furyk said. “But ultimately, left it all out there. It was also nice to get in contention, to get under the heat, to have to hit shots under a lot of pressure, and then to respond well to that and hit some good golf shots. It’ll be a confidence boost going forward.

Some of the most entertaining moments came from everyone else.

Eddie Pepperell of England, in his debut on the Players Stadium Course, ran off four birdies in a five-hole stretch to briefly share the lead, none bigger than a putt from just inside 50 feet on the 17th.

But it wasn’t the best. One group later, Jhonattan Vegas holed a putt from the bottom left to the top right pin position, just under 70 feet, the longest putt made on the island green since the PGA Tour had lasers to measure them. That gave him a share of the lead, too.

“Magic,” Vegas said. “If I tried it a thousand times I wouldn’t even come close to making it, but I’m pretty happy that it happened today.”

Both shot 66 and tied for third.

Jon Rahm and Tommy Fleetwood lost their way early, and then late.

Rahm, who had a one-shot lead, started with three bogeys in four holes and kept his cool until one curious decision. Tied for the lead, he was in a bunker, 220 yards away, partially blocked by trees on the par-5 11th when he decided to go for the green. It never had a chance, finding the water and leading to a bogey.

Rahm was still in the game until he failed to birdie the 16th, and then put his tee shot in the water on the 17th. He closed with a 76 and tied for 12th.

Fleetwood opened with a three-putt bogey and made all pars until hitting into the water on the 11th for bogey. He made eagle on the 16th to have a fleeting chance until coming up short of the island. He shot 73 and tied for fifth with Brandt Snedeker (69) and Dustin Johnson (69).

McIlroy emerged as the winner, his 15th on the PGA Tour and 23rd in his career worldwide. He earned $2.25 million and moved to the top of the FedEx Cup standings, but this was about seeing the results in a year that began well and has been getting better.

In six tournaments this year, McIlroy has not finished worse than sixth.

He has practiced patience the last three months, and he needed it after hitting into the water at No. 4 and making double-bogey.

“I almost liked today because it was tough,” McIlroy said. “I knew guys weren’t going to get away from us. I knew there was some chances coming up. I stayed patient. Anytime I looked at a leaderboard, I was pleasantly surprised because I hadn’t fallen two, three, four shots behind.”

Nothing was sweeter than the sight of the leaderboard when he finished, especially with the Masters a month away.