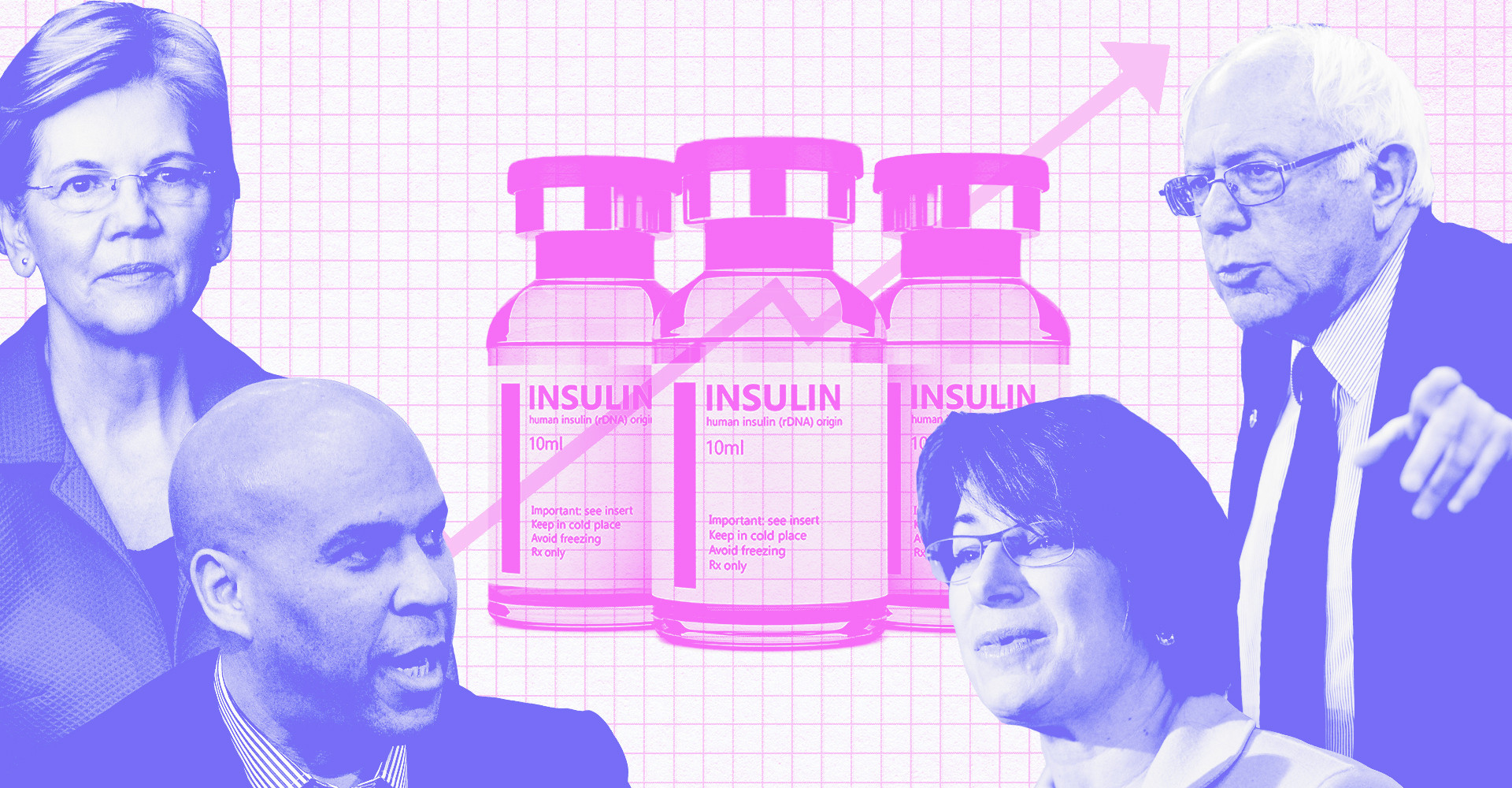 Once a month, Sarah Stark makes the trip to her local pharmacy to pick up the insulin she needs to keep her diabetes in check.

She has health insurance through her job and uses a $100 manufacturer’s coupon to help defray the cost. Even so, she ends up paying a whopping $728.40.

Stark, 28, is not the only one to experience sticker shock when making the purchase. Invariably, the pharmacist who rings her up is taken aback by the price of the medication, and asks if she’s certain she wants to complete the purchase.

Not that Stark really has a choice. She’s a a type 1 diabetic who has had the ailment since childhood. She’s willing to pay the price for her daily dose of insulin, even though it poses financial hardship.

“Those out of pocket costs add up,” Stark said during a recent interview with ThinkProgress. “Not a lot of people could afford that co-pay… and I’ve seen them have to walk away.”

The issue is a matter of life and death — and it’s one Stark says deeply informs the choices she makes at the ballot box.

“I one hundred percent vote with my pancreas,” she said. “One of my values is that health is a human right. I’m not interested in a candidate who doesn’t feel that way.”

Insulin pricing may seem like a niche issue, but it’s one that affects millions of people across the country. As the 2020 Democratic primary field grows, a few candidates have latched onto the rapidly spiraling price of the medication as a campaign issue, revealing the range of ideas in the party for addressing monopolies and reforming the health care system.

More than 30 million people in the United States have diabetes and as of last year, an estimated 7.4 million people like Stark used insulin daily, according to the American Diabetes Association.

Without her insurance and the manufacturer’s coupon, Stark’s insulin would cost about $1,005, so Stark has it easier than some diabetics, 3 percent of whom, according to the Diabetes Patient Advocacy Coalition, have no health coverage at all.

In recent years, insulin prices have skyrocketed, according to figures compiled by the Senate Finance Committee, which is investigating possible price gouging in the industry.

“Drug companies in general have figured out how to price better from a profit-making perspective,” Columbia University economist Bhaven Sampat explained.

“They’ve gotten more sophisticated about finding the maximum price the market can bear and gotten less bashful about it.”

That, coupled with the fact that generic versions of a drug cannot be made until the original patent expires — which hasn’t happened for insulin yet — has helped create conditions for a system that requires people like Stark to fork over hundreds of dollars each month just to remain healthy.

Apparently sensing rising fury from consumers, Eli Lilly recently announced it would offer a half-price version of Humalog. The new drug however would cost $137 a vial, a price that is still unconscionably high, said Christel Aprigliano, CEO of the Diabetes Patient Advocacy Coalition (DPAC).

Aprigliano said she’s heard time and again of diabetics being forced to choose between a life-saving drug and paying other bills, like rent or buying food. Additionally, she said, one in four people on insulin has rationed their medication — purposely taking less than they need — in order to stretch the expensive drug over a longer period of time.

“We shouldn’t have to spend our days wondering whether we pay rent or pay for food or for my child’s health,” Aprigliano said.

As the Democratic primary race begins to take shape, that message seems to have reached the ears of some 2020 contenders.

Sen. Amy Klobuchar (D-MN) talked about the issue in her announcement speech last month, sharing the story of a 26-year-old man who, three days short of payday, was forced to ration his insulin and ultimately died due to lack of access to the medication.

“This disgrace should never have happened in the United States of America. Not with a simple drug that’s been around for nearly a century,” Klobuchar said in Minneapolis. “The obstacle to change? The big pharma companies think they own Washington. Well they don’t own me.”

Klobuchar said the Senate needs to pass legislation that would allow health care providers to import drugs from other countries. Additionally, she would stop Big Pharma’s practice of “paying off generic companies to keep their products off the market,” and “harness the negotiating power of 43 million seniors” to lift the ban on negotiating cheaper drug prices under Medicare.

The issue of rising insulin has caught the attention of two other 2020 contenders, Sens. Bernie Sanders (I-VT) and Cory Booker (D-NJ), in the early days of their campaigns. Just days before announcing his presidential bid, Sanders was tweeting about insulin pricing.

“Today in 1922, researchers at the University of Toronto announced the discovery of insulin. They sold the patent for $1 so it would be available to all,” he wrote. “97 years later, Eli Lilly is charging ~$300 and Americans die because they can’t afford their medication. Outrageous.”

Conservative estimates have found that, under Sanders’ Medicare for All plan — a central plank of his White House bid — the government would save $61 billion on pharmaceuticals.

The single payer advocacy group Physicians for a National Program has estimated that, given the government’s strengthened negotiating power under a single-payer system, drug savings — especially for high cost pharmaceuticals like insulin — would be three times that.

Another 2020 contender, Sen. Elizabeth Warren (D-MA), who co-sponsored Sanders’ Medicare for All bill, has proposed yet another idea: Let the federal government begin to produce its own pharmaceuticals, including insulin, in order to counter the exorbitant costs of some drugs.

Sampat, the Columbia University economist, thinks Warren’s idea could work. He believes that the federal government would be immune from patent infringement.

The argument some of his colleagues have made against government involvement in production, Sampat said, is that such a program would be inefficient. But, he said, “We’re dealing with an extremely inefficient system already. We could tolerate someone doing that with 80 percent of the acumen.”

Both Stark and Aprigliano said they are excited that a health issue as specific as the rising cost of insulin has become a campaign issue. But Stark said that she’s glad candidates are considering proposals to lower the cost of insulin and other drugs, talk isn’t enough. She the presidential contenders to walk the talk, and swear off donations from pharmaceutical companies.

Booker — who during his Senate campaign took more money from Big Pharma in 2014 than any other Democrat — did exactly that last year.

“It arouses so much criticism and [we] just stopped taking it,” Booker told NPR in June. In a statement following the interview, Booker’s spokesman Jeff Giertz said the donations from Big Pharma “became a distraction from his efforts to bring down prescription drug costs” and that they would not resume.

Those who did take pharmaceutical dollars last cycle ultimately took relatively modest donations: Klobuchar took $8,500, and Sen. Kirsten Gillibrand (D-NY), who is also a presidential contender, took $9,500. (Like Booker, however, Gillibrand has a long history of accepting drug company donations, having accepted more than $200,000 since 2007.)

Aprigliano said the next item on her wish list in the  fight against ever-inflating drug prices is a candidate willing to take up rebate reform.

Right now, pharmacy benefit managers and health plans don’t have to disclose how many rebates they pass along or the total value of such price breaks. One way to bring down insulin prices, advocates say, would be to make sure that patients pay the price negotiated between manufacturer and middle man, rather than a mysteriously negotiated list price.

Aprigliano said the challenges faced by people who rely on insulin and other medications illustrate the ways in which our broader health care system is broken, and she wants to hear the more candidates address these concerns on the campaign trail.

“There’s so many things that are complex,” she said. “This shouldn’t be one of them.”