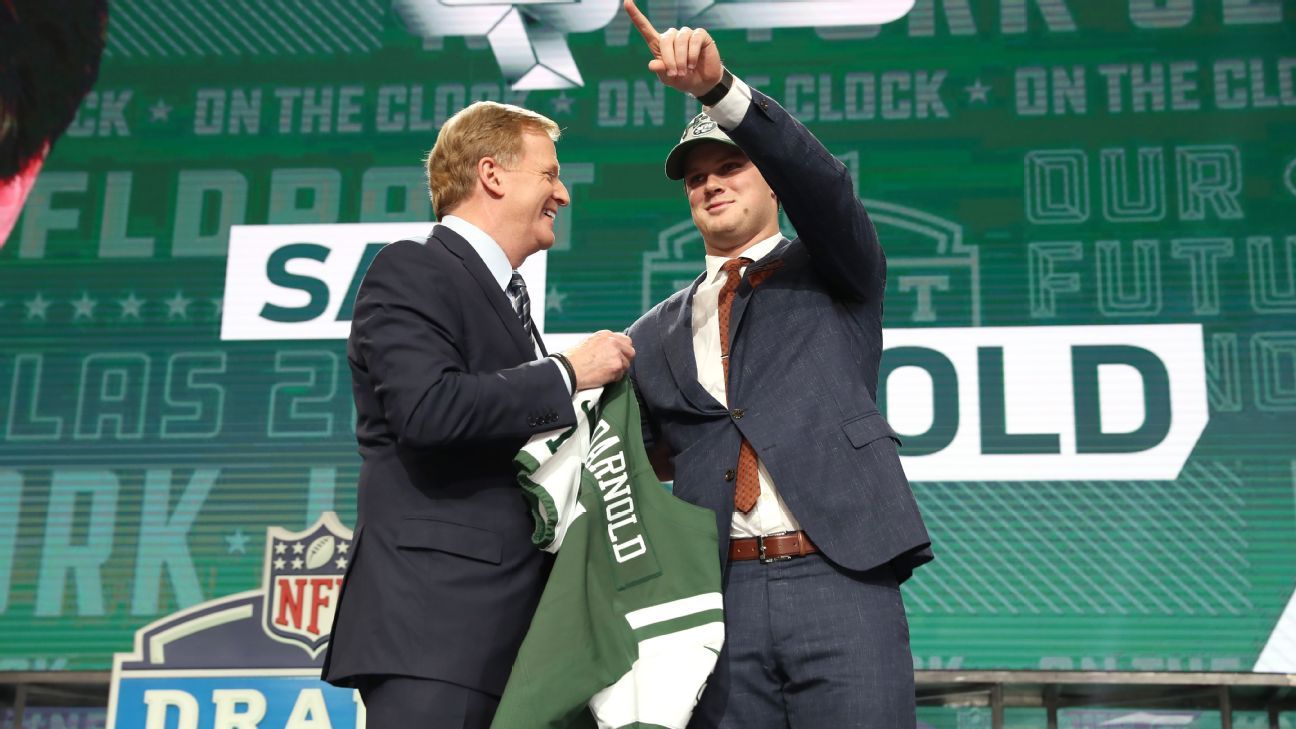 It started with beers in Mobile, Alabama, and it ended two months later with one of the most important trades in New York Jets history. It happened on St. Patrick’s Day 2018. Fifteen minutes before the holiday’s annual parade commenced on the streets of Manhattan, the Jets announced their blockbuster trade with the Indianapolis Colts — a stealth move that was bold, unconventional and shook up the top of the NFL draft.

One year later, it wouldn’t shock anyone if the decision-makers at One Jets Drive hoist a pint of Guinness to celebrate the anniversary of the trade that begat their franchise quarterback.

“We feel very good about Sam Darnold and, obviously at that position, we feel we have a very good young player to work with going forward,” Jets general manager Mike Maccagnan said at the recent NFL scouting combine.

The trade was gutsy and somewhat reckless, yet brilliantly conceived. Does that make sense?

The Jets paid a premium to move up three spots in the draft, not knowing which quarterback would be available with the No. 3 overall pick. In a way, it was a blind leap, but they felt comfortable in making the move because of the intel they had gathered on the top quarterbacks and the top quarterback-needy teams. Their best-case scenario unfolded, as Darnold — the No. 1 player on their draft board — fell to them at No. 3.

In retrospect, the trade might have saved Maccagnan’s job. It also has factored into the team’s aggressive spending this offseason because, without the three second-round picks that went to the Colts, they felt compelled to buy starting-level talent in free agency. Let’s be clear, though: Then and now — and 15 years from now — the trade will be graded on Darnold.

“I think the Colts are very happy with it, but I love Sam Darnold and I think he’s going to be a really, really good quarterback for them if they can start putting enough pieces around him,” ESPN draft analyst Todd McShay said. “Any time you can get your quarterback, you did the right thing, in my opinion. It’s cut and dried, as far as I’m concerned.

“You’d be hard-pressed to find someone in that building that wouldn’t go back and do it again. I think when that’s the case a year later — and, hopefully, three or four years later — then it doesn’t matter if the other team had a great pull from what you gave them in terms of picks. As long as you got what you needed, and it was at that quarterback position, it really doesn’t matter what you gave up. I truly believe that.”

Maccagnan & Co. feel the same way, obviously. They were willing to give up a chunk of owner Woody Johnson’s fortune to sign a proven starter, but free agent Kirk Cousins spurned their $90 million, fully guaranteed offer. Several weeks before the rejection, the Jets had mapped out their strategy, deciding Plan A was Cousins, Plan B the draft.

Sitting at No. 6, with so many teams salivating over a class that featured Darnold, Baker Mayfield, Josh Rosen and Josh Allen, the Jets knew it would be risky to sit tight and do nothing. So one night in mid-January, vice president of player personnel Brian Heimerdinger met with his Colts counterpart at the Senior Bowl in Mobile. Sitting at a hotel bar, he told Ed Dodds they might be interested in the third pick.

On March 13, the Jets got word that Cousins was going to the Minnesota Vikings. It was on to Plan B. That night, on the drive home, Heimerdinger phoned Dodds and told him they wanted to talk trade. In the meantime, they purchased two insurance policies, re-signing Josh McCown and signing Teddy Bridgewater (who was later traded during the 2018 season). Heimerdinger and Colts GM Chris Ballard finalized the trade on Saturday morning, March 17.

The city was shaded green for St. Patty’s Day. The Jets had their own shamrock, a three-leaf clover of Darnold, Mayfield and Rosen — the three quarterbacks they deemed worthy of the third overall pick.

“We felt, with all the research we did, three was kind of the spot,” Maccagnan said.

It was beautifully orchestrated for two reasons: Placement and timing.

Instead of waiting until the week of the draft, or the night of the draft, the Jets made an early move because they felt the price would only increase. Things get crazy on draft night, and teams tend to make panic moves, overpaying. They didn’t want to leave themselves vulnerable while on the clock.

“Sometimes, I think people historically tend to pay a little more in those environments,” Maccagnan said.

The mid-March trade was a surprise attack, as they beat other quarterback-hungry teams to the sweet spot in the draft. It was a Shaq-like box-out. The Buffalo Bills, picking 12th, were said to be furious upon learning of the trade. In the end, they wound up trading up to No. 7 to select Allen.

The Jets got an early start on their pre-draft evaluations because, responding to an edict from CEO Christopher Johnson, they emphasized the quarterback position in their fall scouting. Focusing on the Big Four, they dispatched scouts to as many of their college games as possible. Maccagnan himself flew to the West Coast on four consecutive weekends to watch Darnold play.

By St. Patrick’s Day, while other teams still were in the evaluation process, the Jets already had strong convictions on the four quarterbacks. Maccagnan flew out to the Mayfield and Rosen pro days, just to make sure.

Three was the ideal spot because the Jets knew, based on their back-channel snooping, the New York Giants were locked on running back Saquon Barkley and wouldn’t trade out of the No. 2 position. NFL teams are like reporters; they gather information, trying to sift through the smoke. Maccagnan trusted his “Deep Throat” and was convinced the Giants, contrary to intense speculation, weren’t in the quarterback market.

The Jets never even called the Giants about swapping places because they figured their cross-town rival would demand their 2019 first-round pick. Maccagnan also felt confident the Cleveland Browns, picking first, would stay put because of the exorbitant cost to trade to the top of the draft.

The Jets and Colts swapped first-round picks in the 2018 draft, and it’s doubtful that either team would want a do-over.

In his mind, the worst-case scenario was he would get the second quarterback. Like most observers, he figured the Browns would pick Darnold, leaving the Jets with a choice of Mayfield and Rosen. (They probably would’ve taken Mayfield.) The Browns stunned everyone with Mayfield, allowing the Jets’ dream scenario to unfold.

Oh, it was costly. The Jets gave up the 37th and 49th picks in the draft, plus their second-round choice this year — 34th overall, thanks to a 4-12 season. Using the points-value chart that many teams use as a guideline for trades, the Jets gave up 3,100 points, the Colts only 2,200. On paper, it was a lopsided trade.

“We paid a slightly above-average price to get the pick, with the extra two,” Maccagnan said. “But we didn’t give up the future one, which we felt very good about. It actually worked out very well for us.”

Overcoming midseason growing pains, Darnold finished with a league-high 80.9 QBR over the final four games. The Jets didn’t need that to validate their faith in him, but it certainly helped. They’ve seen these flashes before — Geno Smith posted a 79.0 QBR in the last four games of his rookie season — but you would be hard-pressed to find a talent evaluator who believes Darnold will pull a Geno-like fizzle.

“I broke his tape down throughout his season, [and] he very seldom made the same mistake again — and that shows me he was receptive to coaching,” ex-quarterback and former ESPN analyst Ron Jaworski said. “You make a mistake in the NFL, you’re going to get embarrassed, you’re going to get humiliated. It’s how you handle that, and I thought Sam Darnold handled the negative experiences very well.