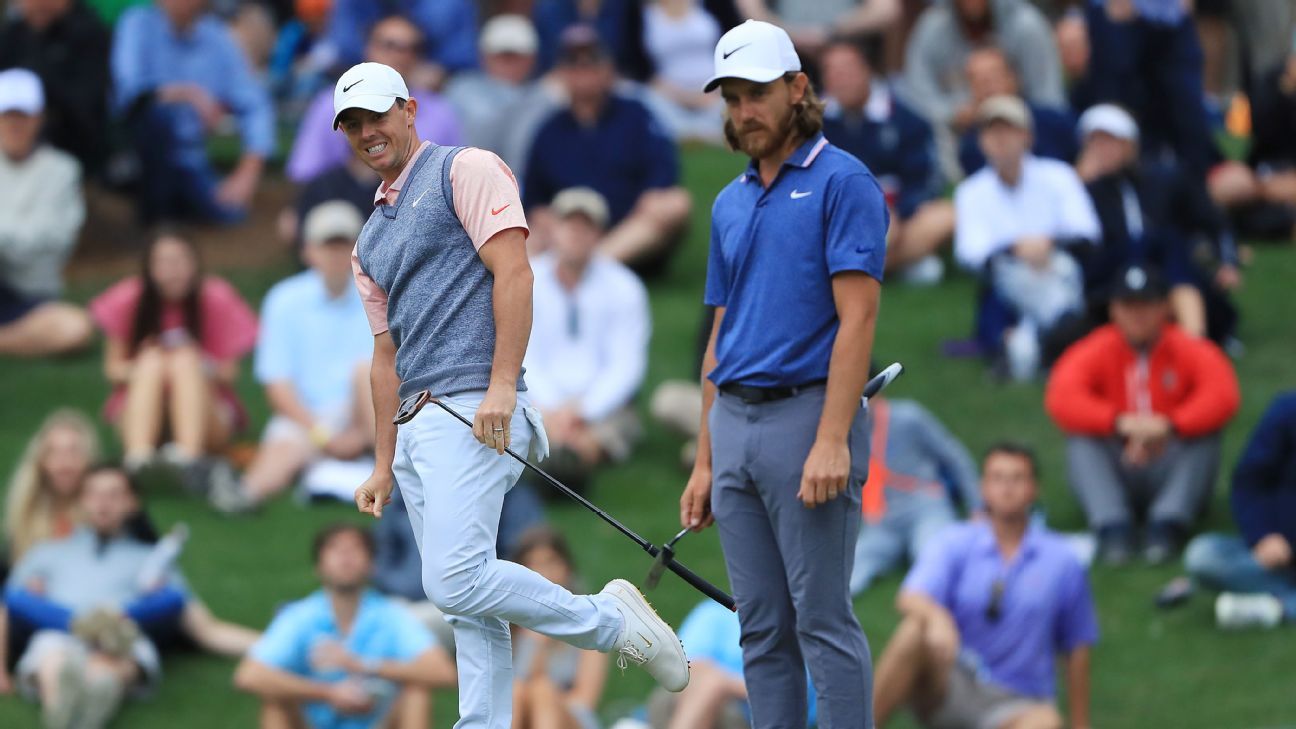 PONTE VEDRA BEACH, Fla. — See if this sounds familiar: Rory McIlroy enters the final round of a PGA Tour event with a chance to win. Now, can he get it done? If so, he’ll have to pass Jon Rahm — a kinder, gentler Jon Rahm. There’s some other big names in the hunt, with Tommy Fleetwood, Jason Day and Dustin Johnson all within shouting distance. With a rough weather day possible for Sunday, things could get very interesting at The Players.

McIlroy would undoubtedly like to answer questions about his ability to close out tournaments. The 14-time winner on the PGA Tour has started the final round first or second eight times in Tour events since the start of the 2016 season. He didn’t win any of those tournaments, finished second only once and ended up fifth or worse five times.

At least McIlroy avoided playing in the final group on Sunday, which might actually be a good thing for him. He hasn’t won in the previous nine tournaments in which he started in the last pairing in the final round, going back to the start of the 2018 season, including one in Dubai and one in Europe.

McIlroy is seeking his first victory since firing a final-round 64 to win the Arnold Palmer Invitational in March 2018 — almost one year ago to the day.

“In a good position, not the best position I could be in,” McIlroy said, after shooting 2-under 70 for a 54-hole total of 14 under.

For McIlroy to end his drought, he’ll need a faster start and better play on the par-5s that he had on Saturday. He bogeyed Nos. 1 and 2 and played the four par-5 holes at even par, after going 6 under on the par-5s in the first 36 holes.

“It’s definitely an area [Sunday] I need to concentrate on and try to make the most of those holes,” McIlroy said of the par-5s. “It is getting difficult out there, definitely with the way the conditions might be. You have to take advantage of the easier holes.”

If what happened to Jon Rahm on the sixth hole in the third round of The Players on Saturday had happened a year ago, he probably wouldn’t have recovered.

Rahm’s second shot from 99 yards hit about a foot from the hole … but bounced off the green. He faced a difficult up-and-down and two-putted for his only bogey.

Rahm shook it off, finished the front nine in 2 under and then had four birdies and one eagle on the back for an 8-under 64, which left him a 54-hole total of 15 under and a one-shot lead going into Sunday.

“About eight months ago, maybe not that long, I would haven’t finished 8 under [for the day],” Rahm said. “I think I would have lost my patience … Even the bogey on sNo. 6 didn’t affect me that much. I think most of it allowed me to shoot this low [Saturday] and shoot low every day this week.”

The 24-year-old Spaniard has already won twice on the PGA Tour and three times in Europe, but admits he had some growing up to do last season.

“I’ve said it many times, last year was a year of personal growth rather than golf game,” Rahm said. “It’s been a work in progress of many years to get to this point, and it’s hard to do when you’re playing highly competitive golf.”

Rahm will carry that renewed confidence and patience — and a one-shot lead over Tommy Fleetwood and McIlroy — into the final round of the PGA Tour’s “fifth major” at TPC-Sawgrass.

Eight other players, including Jason Day (12 under) and Dustin Johnson (10 under), are within five shots of the lead.

“Well, it’s Rory McIlroy,” Rahm said. “I mean he was No. 1 in the world at the age of 22, and he’s a four-time major champion, so he definitely knows how to get the job done. He hasn’t done it since the Arnold Palmer last year, so I know he’s going to come out wanting to do it, especially being The Players Championship, an event where you need to play really good.

“So I know he’s going to come out guns blazing, and we all know what Rory’s capable of.”

Notable Tee Times For The Final Round

Tiger Woods discusses the conversation he had Friday night after carding a quadruple-bogey.

And then the rains came …

Besides moments of drizzle and shifting winds, players pretty much avoided bad weather on Saturday. That might change on Sunday, however, with forecasts calling for an 80-percent chance of rain and winds blowing 10 to 20 miles per hour from the north and northeast.

With cooler temperatures, rain and strong winds, the ball doesn’t figure to fly as far.

“Stay patient,” Rahm said. “We’ll hope for the best weather. I know somebody is going to come out and post a score like they’ve been doing the last few years.”

Hey, where’d they come from?

Two golfers who had been struggling after big changes turned in the rounds to beat during the morning wave on Saturday.

Brandt Snedeker and Ollie Schniederjans both fired 7-under 65s to move into a tie for sxith and with a shot at a good finish at the close of Sunday.

Schniederjans’ round might have been most surprising. The 29-year-old former Georgia Tech star had missed seven cuts without a top-25 finish in his previous 13 starts this season.

Early in the 2018 season, he tied for seventh at the Sony Open in Hawaii and tied for third at the Phoenix Open. Then things fell apart, however, and he hasn’t had a top-25 since.

“I had put some Band-Aids on things for a while to kind of get through and keep my card,” Schniederjans said. “I kind of only hit it low for a while, then I only hit cuts for a while. I just experimented a lot.

“I’ve played now with so many of the top players in the world and watched how they play and the risks they take and just the level they have to be at, the control they have to have with their driver and irons and the ability to shape shots and hit it high and low. … I saw that I was not anywhere near that control of my game that they are.”

After trying to change things on his own without much success, Schniederjans turned to renowned swing coach Butch Harmon in December.

“It’s a huge change, but it’s more just getting organized with what I’m doing with everything about my golf game,” he said. “I changed how I set up, how I train in the gym, how my body is moving, how my lower body moves, how I use my hands, kind of a lot of stuff.”

Snedeker left Harmon for swing coach John Tillery two years ago, and now he’s back with longtime coach Tim Anderson. He hasn’t had a top-10 since tying for second at the Safeway Open in October and was 50th or worse or missed the cut in each of his previous four Tour events.

“[Anderson] told me when we first met, he said, ‘Listen, it’s not going to be as hard as you think it is to kind of get you back to where you feel like you can play good golf again,'” Snedeker said. “It’s a different mindset of trying to use my body to swing the golf club, instead of using my hands to swing the golf club.”