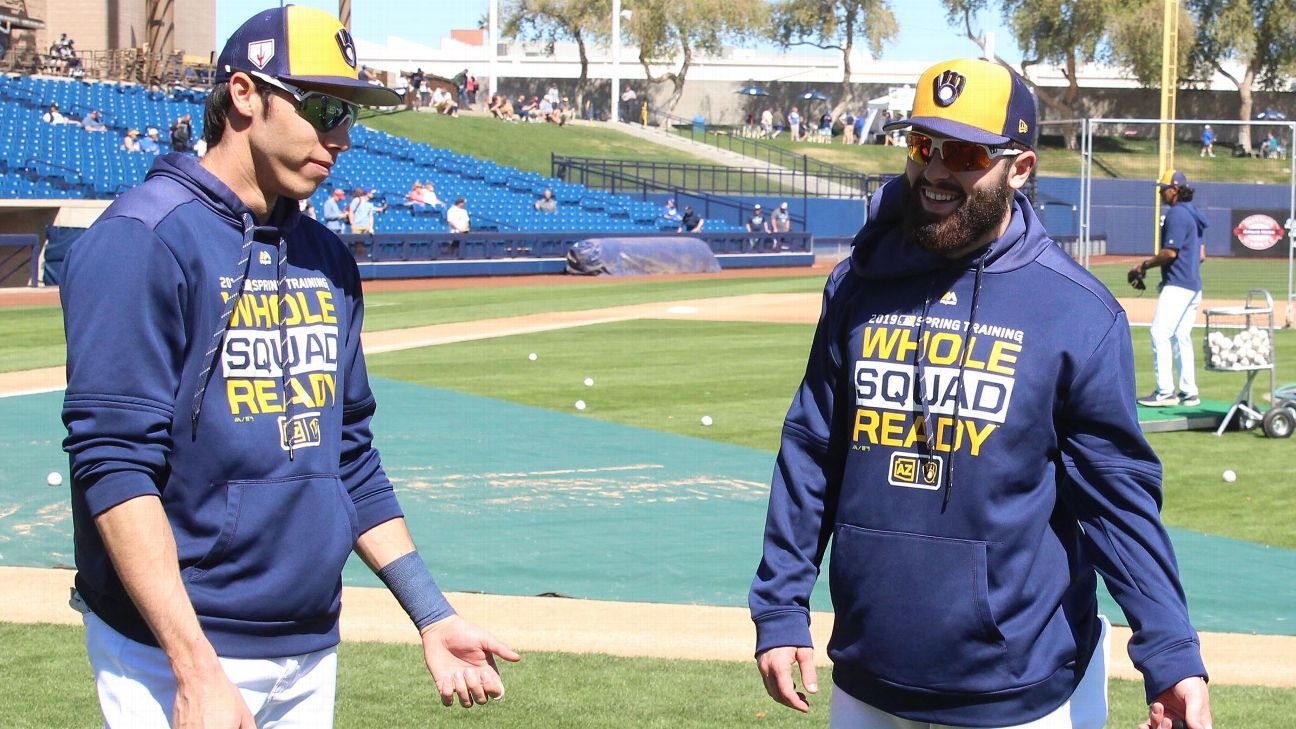 PHOENIX — Baker Mayfield wasn’t going to pass up this opportunity.

Fully aware that the Milwaukee Brewers wanted to protect him, Mayfield knew he wouldn’t get into a spring training game during his two-day stay with the NL Central champions. But the Brewers let the Cleveland Browns quarterback get close, with a surprise stint as the first-base coach for three innings on Saturday.

As the split-squad Brewers came to bat in the bottom of the fourth, third-base coach Eddie Sedar suddenly handed Mayfield a batting helmet and stopwatch and told him to take over.

Did his baseball pals give him any advice?

“Pay attention,” Mayfield said. “Watch out for guys ripping one down the line.”

Mayfield is friends with Christian Yelich and joined the NL MVP and the Brewers on Friday. The 2017 Heisman Trophy winner took batting practice and showed off his arm strength by throwing passes to some of the team’s staff.

“I thought he did great,” Yelich said of Mayfield’s BP session. “It was a lot of fun. He’s got a pretty good swing.”

As the first-base coach, Mayfield deftly handled a foul ball by Milwaukee’s Travis Shaw that ricocheted off the Brewers dugout in the fourth. Mayfield then bobbled a foul carom off the bat of Yelich in the sixth. He quickly learned to not get too comfortable in the coach’s box.

“I don’t know why they have it painted right there,” Mayfield said. “It’s not regulation-size, and it’s too close. I’m looking over at Eddie at third base, and he’s in the outfield.”

Mike Moustakas, though, might want Mayfield to hang around some more. The Brewers star hit a ball into the gap in right-center field in the fourth, and Mayfield waved him on, pumping his arm as Moustakas reached second safely on a double.

In the sixth, Mayfield missed a chance to give Moustakas a high-five after the infielder hit a two-run home run. Mayfield then went to the Brewers’ dugout and leaned over the railing to celebrate.

“I run everything out until I see it go out, so it’s hard for me to hit the first-base coach on a high-five,” Moustakas said. “I wish I would’ve now. I left him hanging.”

Said Mayfield, proudly: “All I know is Malibu Mike was 2-for-2 when I was coaching first base.”

That was about as close as Mayfield got to a hit.

“He’s a professional athlete,” Brewers manager Craig Counsell said. “He looks like a ballplayer, and he’s played plenty of baseball. We played a game [on Friday] in batting practice, a points game, and he was in it until the final round. He acquitted himself very well defensively, offensively for sure. And in the clubhouse. He did a nice job.”

The Brewers outfitted Mayfield with a No. 6 Brewers jersey. Someone updated it on Saturday with white tape saying “16 percent body fat.”

“I didn’t put that there,” Yelich said.

Mayfield and Yelich met at a gym in Westlake Village, California, when the quarterback was prepping for the NFL combine and 2018 draft. Mayfield played third base at Oklahoma, but he’s better known for leading the Sooners to the College Football Playoff semifinals twice in three years.

“He’s a great athlete and has a little bit of a baseball background,” Yelich said. “I’ve seen him swing before. I wasn’t too surprised that he did well.”

Shaw, an Ohio native, likes Mayfield for what he has done on the football field.

Mayfield led the Browns to a 7-8-1 record last season after they went 0-16 the season before.

The Rockies’ starting pitcher, incidentally, was Jon Gray, who also attended Oklahoma. Mayfield imagined what it might’ve been like to face him in the batter’s box.

“It would’ve been [fun] — OU on OU,” Mayfield said. “I’ve never met him. They have his picture all over campus.”

Said Gray: “I love the player he is. He’s a favorite player of all the members of my family.”

Shaw wanted to make sure the Brewers protected the NFL star.

Singer Garth Brooks and comedian Will Ferrell both have made token appearances in spring training games, but they did so to help charities. Seattle Seahawks quarterback Russell Wilson, who played two seasons in the minors with Colorado, hit in an exhibition game for the New York Yankees.

“There’s a dangerous precedent if somebody brings their friend in and puts him in a game,” Counsell said. “I know he’s Baker Mayfield, but one of the players is basically bringing his friend in, and he gets to play in the game. [Mayfield] is here to have fun.”

Mayfield did just that.

“I’ve always loved baseball, dreamed of playing it professionally, and now I’m part of the Brewers,” Mayfield said. “I love it.”

“I don’t think the Browns would be very happy about that,” he said.

As long as Shaw got Mayfield’s autograph on his Browns helmet, he was good.

“I’m going to get him to sign it before he leaves,” Shaw said.