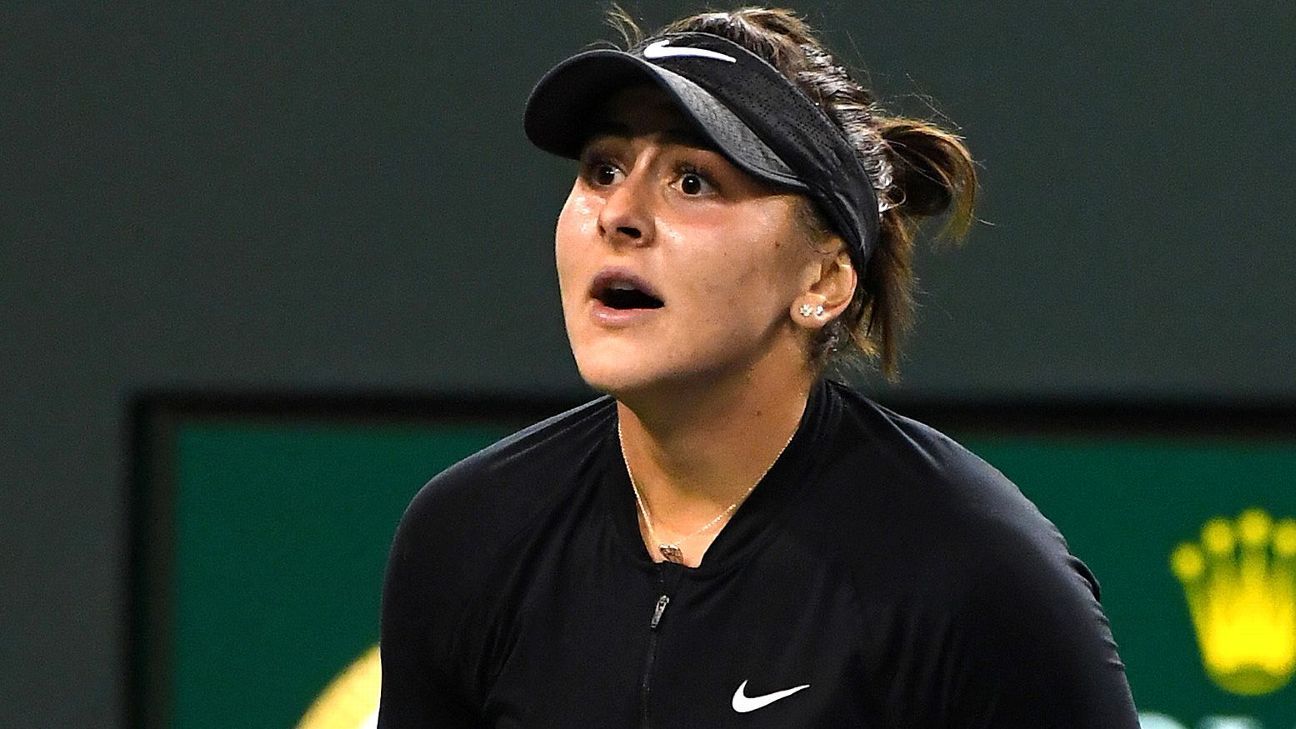 INDIAN WELLS, Calif. — When 18-year-old Bianca Andreescu, the first wild card to make the final at the BNP Paribas Open, tells the story of her improbable run to the biggest title match of her young career, she won’t lead with her overwhelming upset of two-time Grand Slam champion Garbine Muguruza in the quarterfinal. Nor will she start with her rally from love-40 to hold at 5-3 in the third set of her semifinal win over No. 6 Elina Svitolina on Friday.

Instead, she’ll open by telling the story of the first set of her first match of the tournament.

“I started off really, really slow,” Andreescu said in her postmatch news conference Friday night, after asking the media to allow her a moment to stop shaking and compose herself. “I was really nervous. I have never played at Indian Wells before, on such a big stadium. Somehow, I came back in that first set [losing the set in a tiebreaker]. It gave me confidence. And then I started off well in the second set and ended up winning that match in three sets [against Irina-Camelia Begu]. I learned a lot, and I have been implementing what I have learned throughout this whole tournament.”

Andreescu won the next four matches without dropping a set, earning convincing wins over two top-20 players and No. 32 Dominika Cibulkova in the process. After each match, with a delightful blend of youthful bravado and humility, Andreescu talked about the role of creative visualization and meditation in her rise, as well as the power of walking onto the court with confidence.

“Confidence is almost everything for a player,” she said after her fourth-round win over No. 18 Qiang Wang.

And after her upset of Muguruza in the quarters: “Confidence is everything.”

Notice the edit? Even her answers to interview questions are growing more confident by the win.

“I just started playing these high-level events a year ago, and I think I’m gaining more and more experience after every match,” Andreescu continued. “Win or lose, I always learn something. This year, all the wins have definitely given me confidence.”

In January, Andreescu made the final of the Auckland Open as a qualifier, beating Caroline Wozniacki, Venus Williams and Su-Wei Hsieh in the process. So far this year, Andreescu has more wins than any woman on tour — 27 after Friday night — and before this tournament she had only two career wins over top-20 opponents. She now has five.

If Friday night was a test, the Canadian teen passed with flying forehands. Whatever Svitolina threw at her in an attempt to disrupt her game, Andreescu answered. Andreescu played aggressively at times, dictating the point and ripping Svitolina from sideline to sideline, and at other times was crafty and unpredictable. At moments, her play was so capricious, it was as if she changed her mind midshot, suddenly solving the riddle of that particular point.

What is perhaps most impressive about Andreescu’s game — in addition to her maturity, her ability to settle herself after a disappointing string of points and calm her nerves midmatch — is how fully developed it is from all angles. And she’s only 18.

“Ever since I was little, I was always changing the pace,” Andreescu said. “It’s obviously throwing off a lot of players.”

To many of her recent opponents, Andreescu was a blank slate, a young player they’d never faced and whose game was an unknown. At the start of the year — less than three months ago — she was ranked No. 178 in the world. Then she made three semifinals — the only semifinal appearances of her career — and is now ranked No. 60. On Monday, she will be ranked No. 32 if she loses in the final and No. 25 if she wins it all.

“If someone told me at the beginning of the year that I would be top-50 during Indian Wells, I would have told them that they’re crazy,” she said. “But if I can continue doing this, then I think I can do really great things. For me, the sky’s the limit. I believe that anything is possible.”

“Another goal of mine was to make history, and I just did.”

Andreescu hopes that belief will next lift her past three-time Grand Slam champion Angelique Kerber, another player she has yet to face in her career. In her semifinal match Friday night, Kerber needed just more than an hour to dispatch No. 23 Belinda Bencic and hand the Swiss player her first loss since January.

Kerber ended Bencic’s impressive 12-match win streak, which included a straight-sets defeat of No. 1 Naomi Osaka in the fourth round, and is now into her first final at Indian Wells, where she has an opportunity to hoist her first trophy since winning Wimbledon last July.

“Kerber is an incredible fighter,” Andreescu said. “She redirects her shots. She can hit any shot at any time in any specific place whenever she wants. She has a pretty decent serve. She’s a good mover, great fighter. It’s going to be a very tough match.”

For her part, Kerber knows Andreescu is not only playing the best tennis of her life — she is also young, largely unknown and has nothing to lose. “I saw the match today. She is playing really hard and she is going for it,” Kerber said. “She is one who is really trying to take the match into her hands. I know I have to play my best tennis.”

No matter what happens in Sunday’s final, Andreescu has already accomplished something no other player has been able to do. Only two previous wild cards — Serena Williams and Martina Hingis — played their way to a semifinal at Indian Wells. Neither of them made the final.

“It’s incredible, really,” Andreescu said of her achievement. “Another goal of mine was to make history, and I just did.”