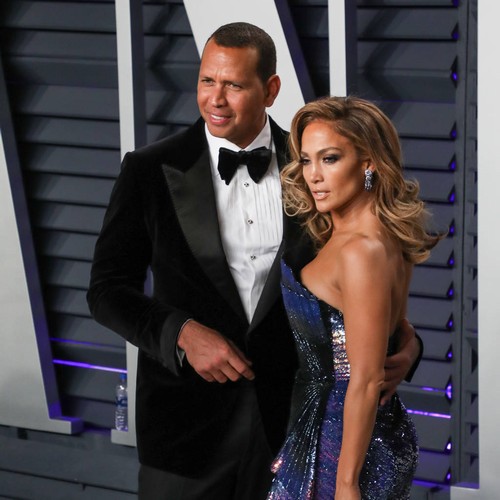 Jennifer Lopez has given fans a glimpse at the romantic beach proposal staged by her new fiance Alex Rodriguez by sharing intimate photos on social media.

The superstar and her retired baseball ace beau announced the news of their engagement on Saturday (09Mar19), each posting an identical close-up shot of the couple holding hands on a beach in the Bahamas, with J.Lo’s stunning diamond ring on full display.

Now the bride-to-be has offered up four more snaps of the grand gesture online, capturing the moment Alex got down on one knee to ask Jennifer to be his wife.

In the images, the On the Floor hitmaker can be seen standing in the sand, wearing a cream blouse and matching flowing skirt, as Alex, dressed in a grey sweater, white pants, and sneakers, pops the question to his girlfriend of two years.

J.Lo was clearly in shock at the proposal, as one shot features the mother-of-two holding her right hand up to her mouth as Alex places the huge emerald cut diamond jewel on her left ring finger, before she bends down to kiss her man.

The fourth picture shows the loved-up stars sharing another deep kiss as Alex wraps his arms around Jennifer.

The singer/actress simply captioned the set of photos with “3.9.19” – the date of their engagement – along with star and heart emojis.

Meanwhile, former New York Yankees player Alex took to his Instagram Story timeline to express their thanks for all of the congratulatory messages received from fans and celebrity friends alike.

“There aren’t many words to share with you, only feelings,” he wrote across another image of the newly-engaged pair embracing. “Gratitude. Excitement. And just… joy.”

“We know there is work to do to keep building a family and future we can be proud of, and we can’t do it without all of you,” he added. “We are so thankful for all your messages of love and congratulations.”

The marriage will be Jennifer’s fourth – she was married to Ojani Noa, Cris Judd and Marc Anthony, the father of her 11-year-old twins Max and Emme, while she was engaged to Ben Affleck, before they called it quits in early 2004, days before they were set to wed. She also had a high-profile relationship with rap mogul Sean ‘Diddy’ Combs.

Rodriguez is also a divorcee – he was previously married to Cynthia Scurtis, the mother of his daughters Ella, 10, and Natasha, 14, from 2002 to 2008. He also dated Madonna and Cameron Diaz.

The new engagement photos emerge two days after Rodriguez was accused of cheating on Lopez by his former baseball rival Jose Canseco. In a series of bombshell tweets, the ex-sportsman claimed A-Rod had been messing around with his ex-wife Jessica behind Lopez’s back, and offered to take polygraph test to prove he wasn’t lying.

The happy couple has yet to respond to the allegations.