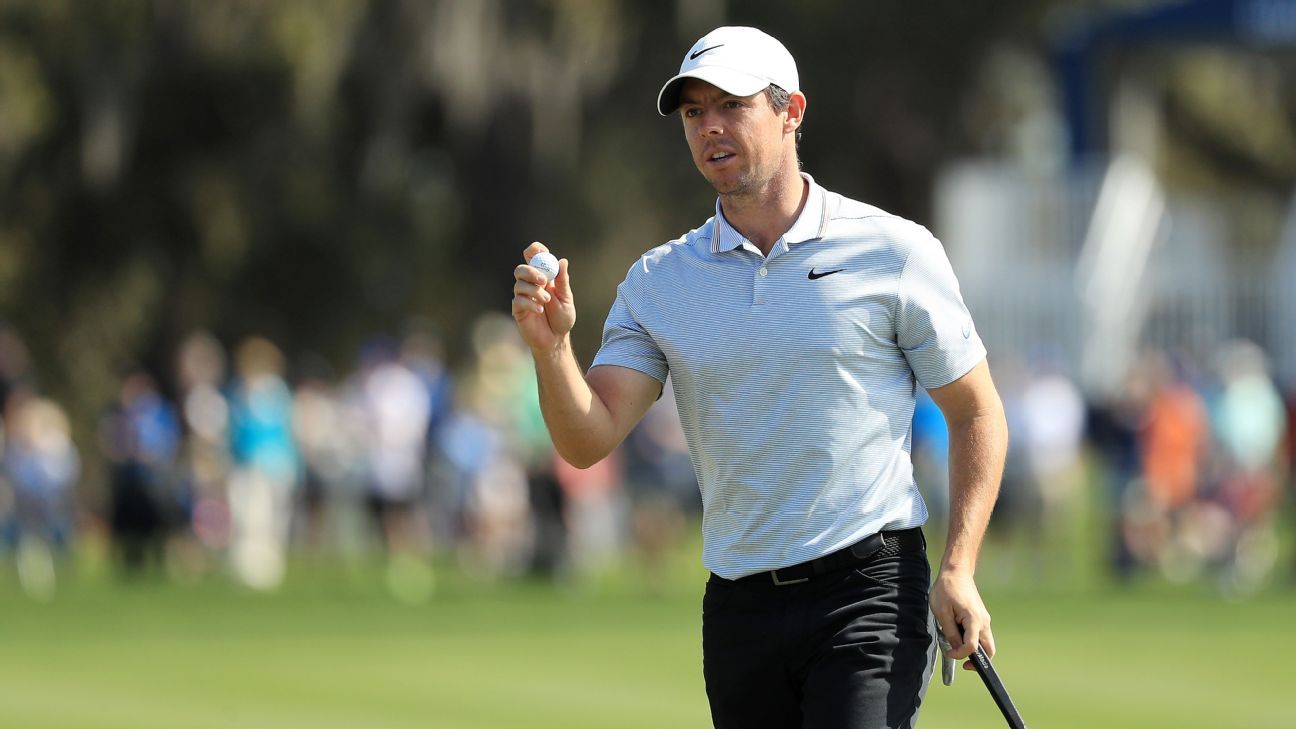 PONTE VEDRA BEACH, Fla. — Phil Mickelson and Jordan Spieth headed home after the first two rounds of The Players Championship at TPC Sawgrass. Tiger Woods might need a miracle to contend for his third title here.

But the leaderboard for the PGA Tour’s “fifth major” is still chock full of big-name stars, including Tommy Fleetwood and Rory McIlroy, who share the 36-hole lead at 12 under.

Here’s what’s coming on the weekend at The Players:

Two big names in search of a big win

Fleetwood followed his opening-round 65 with a 67, and he’ll try to become the first Englishman to win The Players. He’s also seeking his first victory on American soil after finishing solo second at the U.S. Open last season.

“You know, it’s an obvious next step in my career, and I know the more good golf I play, the more it gets talked about,” Fleetwood said. “But that’s a good thing — that I’m expected to make that next step.”

McIlroy has been waiting quite a while to claim his 15th Tour victory. He hasn’t won since the Arnold Palmer Invitational in March 2018. He finished sixth or better in each of his previous six starts this season, including runner-up at the WGC-Mexico Championship in March.

Does Tiger really have a chance?

Tiger Woods is happy with his putting and says he has not done much wrong other than on 17 in the second round of the Players Championship.

Tiger Woods, after opening with rounds of 70 and 71, will start the third round at 3-under, nine shots behind Fleetwood.

“Anyone who makes the cut has a chance to win this golf tournament,” Woods said after Friday’s round.

Maybe not. For Woods to win, he’ll have to post the largest 36-hole comeback in the history of The Players.

According to ESPN Stats & Information, the largest 36-hole comeback was in 2010, when Tim Clark trailed Lee Westwood by seven shots to start the third round. Clark shot 66-67 on the weekend to win by one.

Who invited the old guys?

Jim Furyk, 48, became the oldest player to break 65 at TPC Sawgrass with an 8-under 64 on Friday, only one shot off the 18-hole record in The Players Championship.

Furyk wasn’t even aware that he might make the TPC field after he collected his second top-10 this season with a tie for ninth at The Honda Classic in early March.

“I didn’t realize I had an opportunity to play my way into this field, so I was kind of planning my schedule with this as an off-week,” Furyk said. “I honestly didn’t know that I had that opportunity. A couple of players told me I might get in the field, and I was excited.”

Serving as captain of Team USA in the 2018 Ryder Cup came at the right time, according to Furyk. He’d been battling chest and collarbone injuries, so it gave him time to rest and recover. Watching the best players in the world in France also motivated him to play well.

“Watching the Ryder Cup and being with the best players in the world, on both sides really, I don’t know, it kind of reenergized me a little bit,” he said. “Three or four years removed from really playing my best golf, I kind of wanted to see what I was capable of.”

After finishing No. 184 in the world in 2016, Ian Poulter unexpectedly finished in a tie for second here in 2017, which revitalized his career.

“There’s been some low points,” Poulter said. “I don’t like to dwell on them too much, but obviously it wasn’t too long ago. I did kick start what’s been a nice couple of years, and maybe at times you need a little bit of that [struggles] to have a different perspective on golf. I think I enjoy my golf a bit more now than I did a couple of years ago.”

Furyk and Poulter weren’t the only players over 40 who made an unexpected charge. Vaughn Taylor, 43, went 67-70 in the first two rounds to grab a share of 10th place at 7-under.

“I can’t put my finger on why, but I’m swinging better these days, which is nice,” Taylor said. “For a lot of years there I was struggling with my swing and just couldn’t hit the fairways. I’ve done a good job of hitting fairways this week.”

Vaughn Taylor hadn’t made a cut at The Players since finishing tied for 8th in 2006, missing the weekend in each of the last eight tournaments here.

“It’s been a lot of years and my game’s changed a lot and it’s been a little bit of a roller coaster,” Taylor said. “I’m still feeling it out. It’s been a while since I’ve been in the mix. So I’m just trying to go day by day and see how I’m feeling.”

When the weather started getting rough …

With an earlier date on the PGA Tour calendar, there were more favorable playing conditions at TPC Sawgrass — and myriad low scores — in the first two rounds.

The weather is expected to turn over the weekend, however, with forecasts calling for cooler temperatures in the low- to mid-60s and a 70 percent chance of rain on Sunday.

Forecasts also predict the wind will shift from the north or northeast at 10 to 20 mph, which is going to make the course more difficult. Players might have wind in their face on holes No. 9, 17 and 18, which are already treacherous.

“Any time we get a north wind in the 15 to 20 miles per hour range and colder temperatures, your ball striking has to be more precise,” said Kevin Kisner, who opened with back-to-back 68s and is tied for seventh at 8-under. “I think that’s going to be the biggest key, hitting the ball solid and hitting your shot shapes that you’re trying to hit.”

Woods said the Stadium Course was already playing a little shorter than it does in May because the fairways were overseeded with rye grass.

“Right now, this golf course is playing really short, even for this time of year,” Woods said. “If we played this in May with these conditions, the golf ball would be going forever. But with the overseed on the fairways the ball’s not really running. A few guys are catching some mud on the golf ball, so it’s a bit of a challenge.”

If you were wondering where they were

Jordan Spieth (1 over) and Phil Mickelson (4 over) weren’t the only notable players who missed the cut. The others include Rafa Cabrera Bello (9 over), Paul Casey (8 over), Zach Johnson (6 over), Henrik Stenson (1 over), J.B. Holmes (1 over), Marc Leishman (even) and Xander Schauffele (even).

Two players who need to remain in the top 50 of the World Golf Rankings — or win a tournament — to earn a Masters invitation also missed the cut: No. 45 Shane Lowry (3 over) and No. 49 Andrew Putnam (7 over).