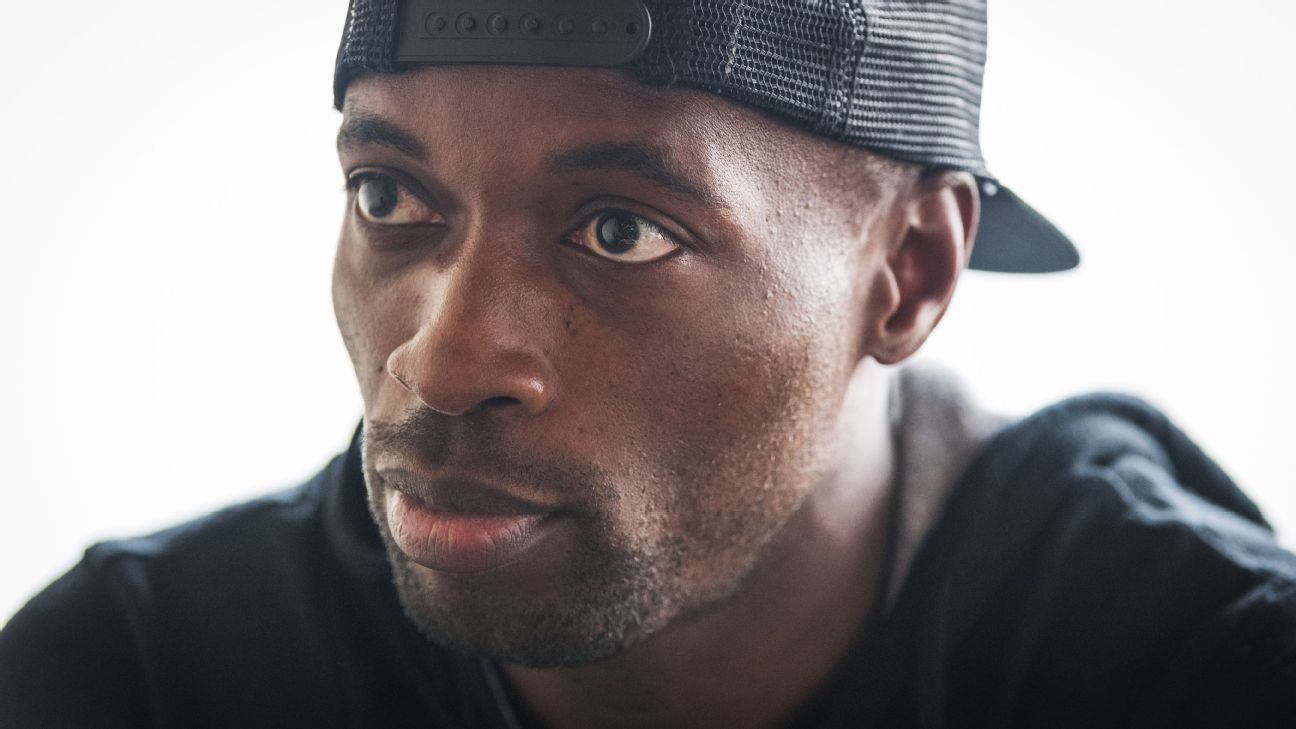 When he first joined the Houston Dynamo in 2014, he wasn’t into wearing them on game days. It was too hot and too humid in his new town, and Beasley was more of a nice jeans or slacks and a simple shirt kind of dude. But a year or two in, teammate Giles Barnes arrived at a game in a suit. Beasley loved the look.

Ever since then: suits for Beasley. He’s acquired about 30 in the past three years, getting them everywhere from Express and Zara to Armani and a Dynamo team partner. His parents buy him a suit, a tie and a pocket square for Christmas every year. He takes them to his tailor, she fixes them up nice and neat, and he’s ready to go. Beasley’s five-year-old daughter knows that when the suit comes on, Daddy’s going to work.

Beasley tells this story in a coffee shop a couple miles from the Dynamo training facility, as the team prepares to host Vancouver (Saturday, 3 p.m. ET, ESPN+). He’s wearing a decidedly un-suit-like (yet athlete-approved) uniform of a backwards mesh hat, black short sleeve shirt, distressed jeans and an untied pair of blue/white Nike Air VaporMax sneakers. In two days, he’ll have been a professional soccer player for 20 years. He’s grown up, and grown old, as part of the American soccer consciousness.

For U.S. soccer fans, Beasley’s presence is a comforting one, like that of, well, a well-worn suit.

From being drafted by LA Galaxy in 1999 to stops in the Premier League, Bundesliga and beyond, DaMarcus Beasley continues to thrive 20-years since his debut.

Summing up a two-decade long career is an exercise in futility, but one way to try to do so is through club accomplishments. Beasley won trophies in Scotland (Rangers), the Netherlands (PSV Eindhoven) and the United States (Chicago Fire, Dynamo), and was the first American to play in the semifinals of the Champions League, with PSV. He also spent time with Manchester City and Puebla in Mexico. His Twitter profile lists his location as “All Over…” which feels both accurate and appropriate.

Or perhaps it’s his U.S. national team career, which stretched over 16 years, 126 caps and 17 goals, that best speaks to his impressive longevity. Beasley is the only American to play in four World Cups, and had they not imploded in Couva, Trinidad and Tobago, he likely would have become just the fifth player in history to appear in five. (Of that night, Beasley remembers feeling “disbelief, shock, it was surreal” at the final whistle. He cried the next day as the magnitude of what they lost struck him.) He even tried to quit the red, white and blue, retiring from the national team in 2014, only to get pulled back into the mix when no better left-back option presented itself.

Over 20 years, Beasley has been an ultimate professional. “He always finds a way to stay on top. That’s an art. I tell a lot of young professionals that becoming a pro is easy. The hard part is staying a pro,” Oguchi Onyewu, who joined Beasley as part of the inaugural U-17 class in 1999 along with Landon Donovan, Kyle Beckerman, Bobby Convey, and more, said of his friend. (Put another way, Beasley outlasted the U.S. Soccer Federation residency program in Florida, which closed its doors in 2017.)

“It takes a special kind of player to be able to adapt themselves to culture and playing styles,” Onyewu said. “He’s coachable. He’s a good team player. He’s that guy who is always going to make you laugh. He’s that person who is good for a locker room and everybody wants to be around. On top of that, you see his quality in the game. That’s something that you can’t teach. You can’t teach speed. You can’t teach tenacity.”

Ultimately, why he has lasted as long as he has is less interesting and important than the mere fact that it happened. Here’s Beasley, more than 7,200 days and who knows how many thousands of miles (and millions of frequent-flier miles) still on the field, still grinding, still smiling. Beas — almost everyone calls him Beas — at 36 isn’t a whole lot different than Beas at 16. Only now, he’s a legend.

Beasley credits the four and a half years he spent with the Chicago Fire from 2000-04 with teaching him how to win. His first season, he was finishing high school in Florida — a promise to his parents he made when he signed his pro contract — going to class Monday through Wednesday, then flying to Chicago, training Thursday and Friday, playing Saturday and returning to Florida on Sunday.

“Peter Nowak and Hristo Stoitchkov were literally sitting next to me [in the locker room],” he said. “I was learning how you approach the game and what it takes to win at the highest level. You see it on the field and in training. I got lucky that I played with those players. They were all winners.” And Bob Bradley’s Fire teams were indeed loaded. The 2001 squad featured Chris Armas, Carlos Bocanegra, C.J. Brown, Jim Curtin, Diego Gutierrez, Jesse Marsch, Ante Razov, Zach Thornton, Josh Wolff and Eric Wynalda. Beasley, the youngest player by more than two years, started 24 games and made his first of three consecutive All-Star teams.

He burst into the wider American sporting landscape at the 2002 World Cup, flying up and down the left flank as the U.S. reached the quarterfinals. Former U.S. fitness coach Pierre Barrieu remembers the midfielder spending pretty much every day under the comforter at the hotel. Then he’d get up, do a couple of half-assed stretches and go play. “He was just a kid,” Barrieu says. “He didn’t feel the pressure.”

Mostly, he loved to ball.

In 2004, the Stars and Stripes faced Poland in a friendly at Soldier Field. Beasley went the full 90 minutes. The Fire played the second half of the doubleheader. Bradley asked Beasley how he was feeling; Beasley said he was fine and that he wanted to start. His coach refused but put him on the bench. In the second half, Beasley came on with about 35 minutes remaining. If there was a game, Beasley wanted to be on the field. “I couldn’t do that anymore,” he said, laughing. “Zero chance.”

Beasley’s joy serves as a connecting thread. In 2005, he scored against Mexico in Columbus, Ohio, the second tally in a dos a cero victory. The move came straight from the training ground: Bruce Arena implemented the play a day before the game, telling Beasley that if it worked, he’d be free and clear. When it did, the midfielder found the back of the net as his mom, dad and friends watched from the stands. In celebration, he started sprinting to nowhere, brilliantly, emphatically, irrepressibly.

In 2019, the spirit and the smile remain, but the body is slowly giving way. He’s not as elastic as he was, not as resilient. When Beasley played at Rangers from 2007-10, he watched how 37-year-old David Weir took care of himself and started emulating some of those techniques. Off days are off days, lots of sitting on the couch and doing nothing, making sure there’s food in the fridge so he doesn’t have to leave the house.

In Houston, Beasley plays the role of experienced captain and plays it well, leading mostly by example. He’ll never be the loudest guy in the room, but he works with the younger players, staying after training to talk to defenders about positioning, tactics and, perhaps most importantly, the life of a pro. While he’s almost twice as old as some of his teammates, he can still hang with them. They respect his choice in music, too.

“Obviously, [he listens to] some older stuff that I don’t think I’ve listened to,” teammate Memo Rodríguez said. “I was 3 years old when he signed his first contract. But everyone is happy when he puts on his playlist.”

Beasley says he’s playing this year like it’s his last, although he won’t commit to it being so. At most, however, he’ll play one more season after this one. “I would be comfortable retiring after this year if I do,” he says. “I would be OK.”

Friends of his who have retired — at this point, there are a lot of them — tell him to play as long as he can. It’s different when you’re not a soccer player, when the game, the feeling, the pregame butterflies have all gone. Nothing beats that prematch adrenaline rush. But also, they tell him that he’ll know when it’s time to walk away.

When Beasley does call it quits on an astonishing and varied career, he plans to stay close to the game. He has a soccer school he’d like to spend more time building, hopes to try his hand at television and perhaps become a general manager or team president. He won’t coach — “To go back and do the same thing, I couldn’t do it,” he said — but relishes the idea of working with a coach to build a roster, to find pieces, to realize a vision.

“I don’t think he gets his due,” Onyewu said. “People speak of Landon, and Landon was a great player, obviously, but DaMarcus was right next to him, if not equal and side by side with Landon and his success. I do believe DaMarcus was, and is, one of the greatest U.S. players to ever play. It’s almost overlooked. But the ones that know don’t overlook it.” (Not for nothing but Beasley won the Silver Ball at the 1999 U-17 World Cup, finishing behind Donovan.)

Beasley has always been small and slight, easy to overlook on the field. At the end of the day, however, his teams have won a lot more than they lost. That can’t be a coincidence. “Even though he’s not the most athletic, he’s always doing the right things on and off the field,” Dynamo head coach Wilmer Cabrera said of his captain. “We count on him. He’s not going to be the most notorious guy on the field, but he does what is necessary to be sure that he does his job. He never gets exposed.

“When you have a defender who does the job like that, it makes it easy for a coach. You don’t have to worry about anything with him.”

Ask Beasley how he’d like to be remembered and the answer might not be surprising. “A guy you could always count on. I feel like you could always count on me in big games. Games under the lights. Big stadiums. Big crowds. Important games. I wouldn’t always show up on the score sheet, but I’d play both ways. Helping defend. Make sure the left side, if I was on the left side, was locked up. You know what you’re going to get out of me.”

“I wasn’t the best at everything. I just tried to take what I had and use it to my advantage.”