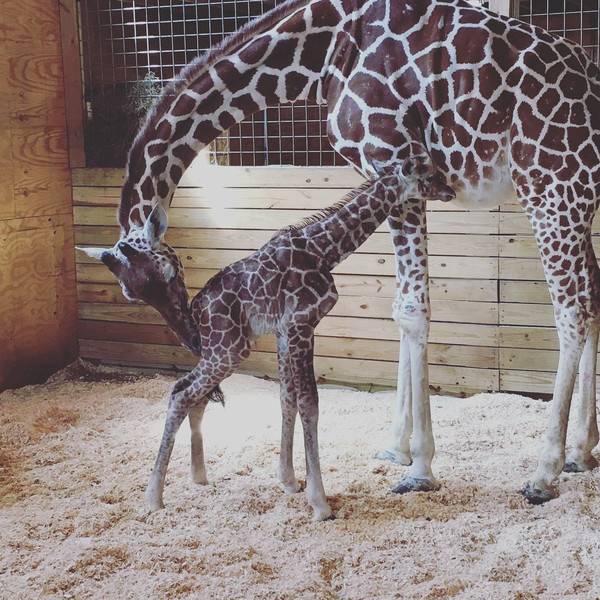 April the Giraffe, who gained Internet fame in 2017 when she was live-streamed giving birth, welcomed her fifth calf into the world on Saturday. Animal Adventure Park once again streamed the birth and April’s own Twitter account announced on Saturday morning that she was in labor.

According to USA Today, April gave birth just after 12:40 p.m. ET. The 17-year-old giraffe has been an Animal Adventure Park in Harpursville, New York since 2015.

Animal Adventure Park’s owner Jordan Patch announced in July that the world-famous animal was pregnant again and would be expecting her fifth calf in the early spring. The new calf, whose name has not been announced yet, has the same father as its sibling, Tajiri.

His name is Oliver a.k.a. “Ollie.” Ollie and April both live in the same Giraffe Cabin at the park, too.

Watch the Giraffe Cams of AAP:https://t.co/EOX0K43Khg

All things giraffe at AAP:https://t.co/JRj2DosUZO

Patch explained on the Today show  in July that they don’t know the sex of the giraffe until April gives birth.

USA Today reports that over 301,000 people tuned in to watch the birth. Although it’s a tad less than the 1 million-plus people who witness Tajiri’s birth, it’s still a feat nonetheless.

However, it looks like Taj might need to learn some lessons as a big sibling because he likes carrots, romaine and the spotlight.

We can’t wait to learn the name of April and Ollie’s newest calf. Congrats on the newborn!