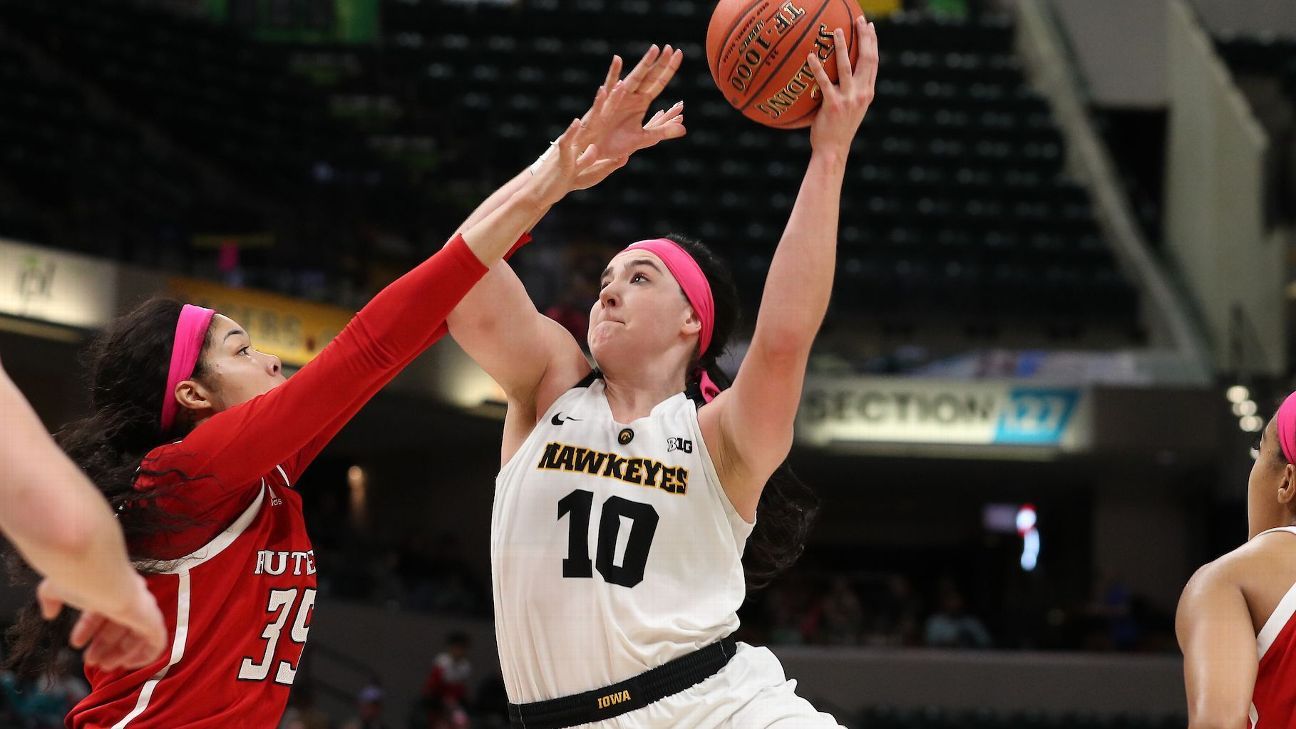 In a season in which the national championship seems up for grabs, the espnW national player of the year ended up being a unanimous pick.

Iowa center Megan Gustafson won the honor both for her game-after-game consistency and her big-game fireworks. For the second year in a row, she led the nation in scoring, defying every type of defense designed to slow her down. And she dominated the boards, too, averaging a double-double (28.0 PPG and 13.3 RPG) this season.

Gustafson already was a leading candidate as the nation’s top player, but she slammed the door shut with an epic performance in leading Iowa to its first Big Ten tournament title since 2001.

Gustafson had 30 points and 17 rebounds in Iowa’s 70-61 quarterfinal victory over Indiana, avenging a regular-season loss to the Hoosiers. Iowa trailed with just more than 4 minutes remaining in the game, but coach Lisa Bluder said the Hawkeyes never lost their confidence.

“They keep believing in themselves so much, and they also know they’ve got Megan,” Bluder said. “So I think that’s kind of a big relief for everybody, too.”

“She’s a great player. She’s an All-American,” Maryland coach Brenda Frese said. “She knows how to finish, either shoulder, great touch around the rim.”

It was sweet redemption for Gustafson and the Hawkeyes, who’d previously never advanced beyond the Big Ten quarterfinals in her career.

“This is a game I’m going to remember for the rest of my life,” Gustafson said after the final. “This is what I wanted coming to Iowa. I wanted a Big Ten championship. I just couldn’t be more proud of how our team played, and it’s a dream come true.”

Now the Hawekeyes will try to have another run, this time in the NCAA tournament. Iowa played in the WNIT in Gustafson’s first two seasons, and lost to Creighton in the first round of last year’s NCAA tournament.

Gustafson is the Hawkeyes’ all-time leading scorer (2,700) and rebounder (1,403), and one of the more dominant players in Big Ten history.

At 6-foot-3, Gustafson has great hands and an unrelenting commitment to trying to get open and provide a target for her teammates. Never mind the double or triple teams, Gustafson battles through the defense. She is shooting 65.5 percent for her Iowa career, and she has sent many a discouraged defender to the bench.

Sign up now then come back to fill out your bracket after Selection Monday for a chance to win $5,000 in Amazon.com gift cards. Sign up now

The Hawkeyes (26-6 overall, 14-4 in Big Ten) defeated Maryland 86-73 in their regular-season matchup in Iowa City. Gustafson had 31 points and 17 rebounds in that game. In the rematch in the Big Ten final, the three Terps who primarily guarded Gustafson all fouled out.

“Megan is so strong, so physical, and just a very difficult match-up, obviously, for us,” Frese said. “It just really impacted us because of just the tremendous foul trouble that we were in.

“She’s just that good. The first time we played them, we tried to run a lot of triangle-and-two and different looks at her, and it didn’t pay off. We tried to front; we tried to have great help-side defense.”

Frese’s laments were expressed by all of Iowa’s opponents. Defenses were set up specifically to slow her down, but she had a double-double in every game but two, when she just missed on the rebounding side.

Bluder has watched Gustafson grow into a Hawkeyes legend.

“Nothing she does surprises me anymore,” Bluder said. “Whatever we give her, she just goes after it and she does it.”

Mississippi State has had a lot of great moments during its rise in the SEC and nationally in women’s basketball. But Vic Schaefer wants more.

That’s the Bulldogs’ motto this season: to get that one extra victory in both the SEC and NCAA tournaments. One mission has been accomplished: Mississippi State won the league tournament for the first time in program history after losing in the final the previous three years.

Can the Bulldogs — who’ve lost in the national championship game the last two seasons — also go a step further at the Big Dance? That remains to be seen, but Mississippi State has likely earned a No. 1 seed in the NCAA tournament again.

It has all happened despite the Bulldogs losing four starters for the second season in a row. Yes, Mississippi State has one of the nation’s top weapons in center Teaira McCowan. But the way Schaefer has reconfigured the team around her — while losing just two games — earned him espnW national coach of the year honors.

Mississippi State beat Arkansas in the SEC final 101-70, with McCowan earning tournament MVP honors to go with regular-season SEC player of the year.

“We have had some really good teams, y’all, that’s gotten to this game,” Schaefer said after the final, “and they couldn’t get it done on Sunday. We talked about this team had a chance to separate themselves and be that team that could get it done.”

It happened in Schaefer’s seventh season in Starkville. After helping coach Gary Blair win an NCAA title at Texas A&M in 2011, Schaefer took over Mississippi State before the 2012-03 season. Schaefer is 191-55 with the Bulldogs, who’ve won the SEC regular-season title the past two seasons.

“We talked about this team had a chance to separate themselves and be that team that could get it done.”

In 2018, Mississippi State lost the NCAA championship game 61-58 on a buzzer-beating 3-pointer by Notre Dame’s Arike Ogunbowale, and Schaefer beat himself up afterward. The Bulldogs had come so close, a year after falling in the NCAA final to South Carolina.

Four seniors departed after the 2018 season. But McCowan was back, and the Bulldogs had elite graduate transfer Anriel Howard come in from Texas A&M. Plus three reserves — Jordan Danberry, Jazzmun Holmes and Chloe Bibby — were ready to step into starting roles. That lineup lost just once: 82-74 at Oregon on Dec. 18.

Then the Bulldogs lost Bibby, their top 3-point shooter, to a knee injury in a victory on Jan. 17. But another transfer, sophomore guard Andra Espinoza-Hunter, elevated into the starting role and has provided needed perimeter shooting. She has 58 3-pointers, including eight in the SEC final.

After the championship game, McCowan was asked about the Bulldogs’ ability to play with high energy three days in a row.

“We just know we can’t give in,” she said. “Coach always says, ‘These games are about toughness.’ Whether it’s being mentally tough or physically tough, we still have to be in that moment. We still have to dial in, just find a way to fight through the game.”

Where does that leadership example come from? McCowan gestured toward Schaefer and said, “Him.”

Rhyne Howard took little time to make her presence known in college basketball. The Kentucky freshman scored 29 points in her second game of the season, and it was clear the Wildcats had a budding star. She carried that momentum through the season and is the espnW national freshman of the year.

Howard also earned All-SEC first-team honors and was SEC freshman of the year as Kentucky (24-7 overall, 11-5 in league) finished fourth. The Wildcats were upset in the quarterfinals of the SEC tournament by Missouri in overtime, but Howard put on a show, scoring 25 points.

“So many plays in the game today where she’s just super special,” Kentucky coach Matthew Mitchell said afterward. “She just is so gifted and talented.

“The idea here now is just to keep trying to get better every day, keep trying to learn some nuances of the game that can help her become an even better player. She was dynamite. We wouldn’t have had a chance to win the game had she not played the way that she did.”

“She was dynamite. We wouldn’t have had a chance to win the game had she not played the way that she did.”

Howard was the Gatorade player of the year in Tennessee as a senior at Bradley Central High School. But she didn’t stay in her home state, opting instead for Kentucky. She is averaging 16.3 points — seventh-most in the SEC this season — 6.7 rebounds and 2.3 assists.

A 6-foot-2 guard, she is able to take advantages of mismatches on the perimeter and inside. Her size means she can shoot over a lot of other guards, and she can also post up against anyone. She has made 68 3-pointers this season, the most ever for a true freshman at Kentucky.

Howard’s 489 points are third-most by a Kentucky freshman; with three more, she will bypass A’dia Mathies for second place. First is Valerie Still, the all-time leading scorer in Kentucky women’s or men’s basketball history. Still is being inducted into the Women’s Basketball Hall of Fame this summer.

Being in the same conversation as Still and Mathies is big-time for a Kentucky women’s basketball player. Howard’s 200 rebounds and 64 steals both rank third in Wildcat history for a freshman.

Howard has a chance to make even more of an impact as a freshman, as Kentucky awaits an at-large NCAA tournament bid.