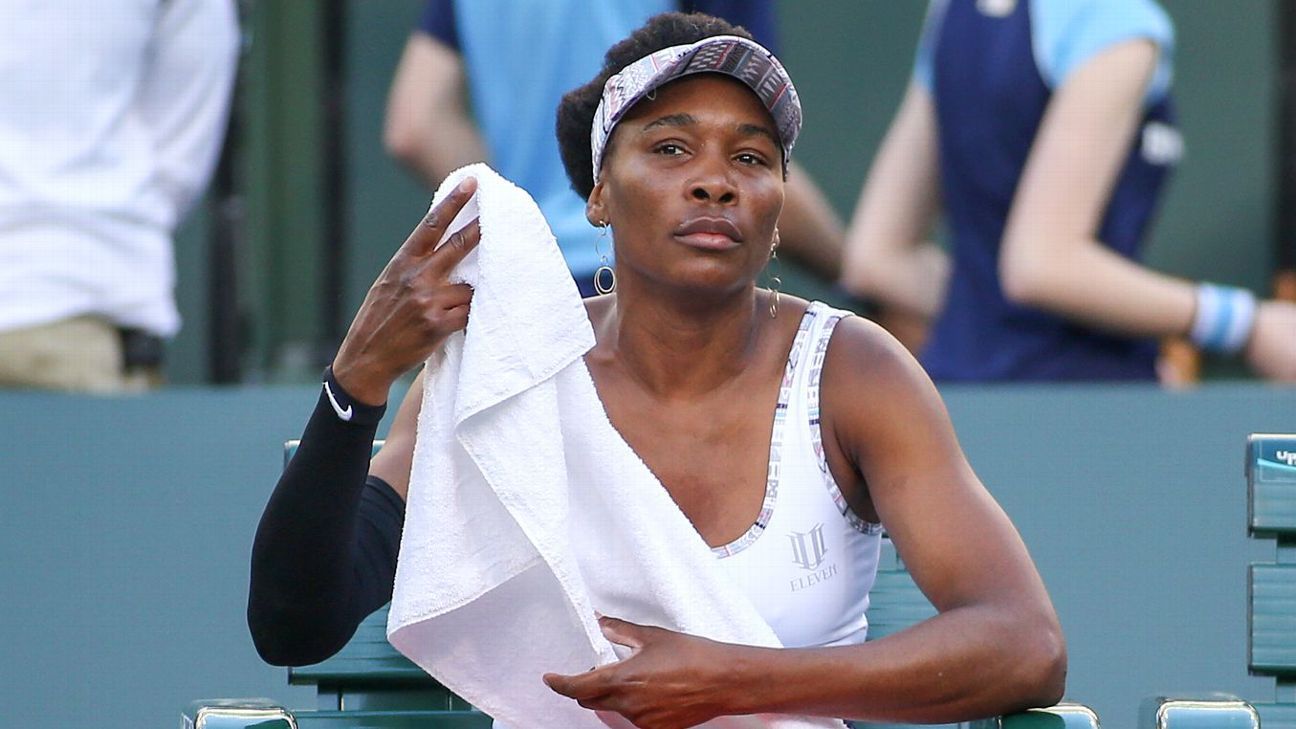 INDIAN WELLS, Calif. — For four rounds in the California desert, seven-time Grand Slam champion Venus Williams looked as primed for a run to a final as she has since, well, last year at this very tournament. A year ago at Indian Wells, she was ranked No. 8, played through two top-25 players (and little sister Serena) and didn’t drop a set until bowing out to Daria Kasatkina in the semis. Despite failing to make the final, Williams’ stellar performance at the 2018 BNP Paribas Open gave tennis fans — and Venus fans in particular — reason to believe the then-37-year-old had found a fountain of youth.

But in the year in between, little went right for Williams, who failed to make another semifinal, suffered two first-round losses — including one at Roland Garros — and fell to No. 36 in the world. She arrived this year at Indian Wells unseeded and playing in only her third tournament of 2019, but from her first serve she showed only a focused determination to make this the site of career singles title No. 50 in a storied but shortening career.

“I’m definitely playing with the home crowd here,” Williams said earlier this week. “Hopefully I can take advantage of that energy and momentum.”

After gritting out a tough three-setter against Andrea Petkovic in the first round, Williams rallied from down a set and two breaks against No. 3 Petra Kvitova and then cruised to straight-sets wins over Christina McHale and Mona Barthel. In each match, Williams was relentless, playing sharp and focused — her lethal, telegenic forehand a highlight of the tournament.

But in Thursday night’s quarterfinal against No. 8 Angelique Kerber, with her right knee taped and her lateral movement compromised, Williams was slow to find her groove. (In typically terse form, she offered no further injury report in her postmatch news conference.) In the opening game, her first-serve speed topped out at 84 mph — more than 30 mph slower than her fastest serves of the tournament — and she limped back to the baseline after several points. Still, Williams held.

Although clearly struggling with an injury, she fought. She varied her game, shifting the pace and placement of her groundstrokes, and forced her three-time Grand Slam champion opponent to continually adjust to account for the unpredictability of her play.

For much of the first set, Williams’ plan confounded Kerber, who at times looked lost trying to predict her play. But it wasn’t enough. Kerber’s superb defense kept her in the match long enough to gain the confidence to begin dictating points. After taking the first set in a tiebreak, Kerber rolled to a 7-6 (3), 6-3 win and her first semifinal appearance at the BNP Paribas Open since 2013.

“She played really tricky,” Kerber said after the match. “I was really trying, in the first set especially, to find my rhythm. I’m happy that I won the first set and then could move in and play my tennis. I’m still trying to improve my offense, and it’s hard work. I know I can trust my legs and run down every ball, but I have to go for it and take the ball in my hands more.”

With only 24 hours to prepare for a semifinal match against No. 23 Belinda Bencic, a feel-good favorite who’s riding a 13-match win streak and a confidence high, Kerber must reset quickly to prepare to face a player with a much different style from Williams.

“It will be a completely different match [Friday],” Kerber said. “Bencic is playing really flat, and she’s going for it. It will be a battle.”

On the other side of the draw, No. 6 Elina Svitolina — who is contesting her third semifinal already this year — will face 18-year-old Canadian Bianca Andreescu, a hard-serving teen in the midst of a breakout year. After beating four top-10 seeds to win the Auckland Open in January, Andreescu made the semifinals in Acapulco and has taken down two top-20 players here, prompting many to wonder whether she will turn out to be the Naomi Osaka of 2019.

“I think confidence is almost everything for a player,” Andreescu said after her fourth-round upset of No. 18 Qiang Wang. “If you trust your shots, if you trust your game, good things always happen. I think that’s what’s happening with me right now. The work I have put in is really paying off, and it’s showing. But I don’t think it’s going to be all butterflies and rainbows every day. It has been so far, and I’m just gonna take it one day at a time. Hopefully I can do a lot of great things this season.”

For Williams, Friday will require a reset of her own as she prepares for next week’s Miami Open — and the rest of the season. It was lost on no one in attendance at Indian Wells that this could be the final time Williams, one of the all-time greats, plays in the Coachella Valley. Williams turns 39 in June, and while she balks at any talk of her age or retirement or the toll these tournaments take on an aging body, there is a cruel reality to her reticence.

Thursday night, Williams gave all she had. She used every ounce of her creativity, experience and knowledge of the game to attempt to overcome a body that couldn’t perform at 100 percent — and it wasn’t enough. How long can anyone, especially a player of Williams’ caliber, be expected to give everything and not receive the desired outcome?

That is a question only Williams can answer. But rest assured, she won’t do it in a postmatch news conference and she will do it only when she is certain she is doing so with zero regret.