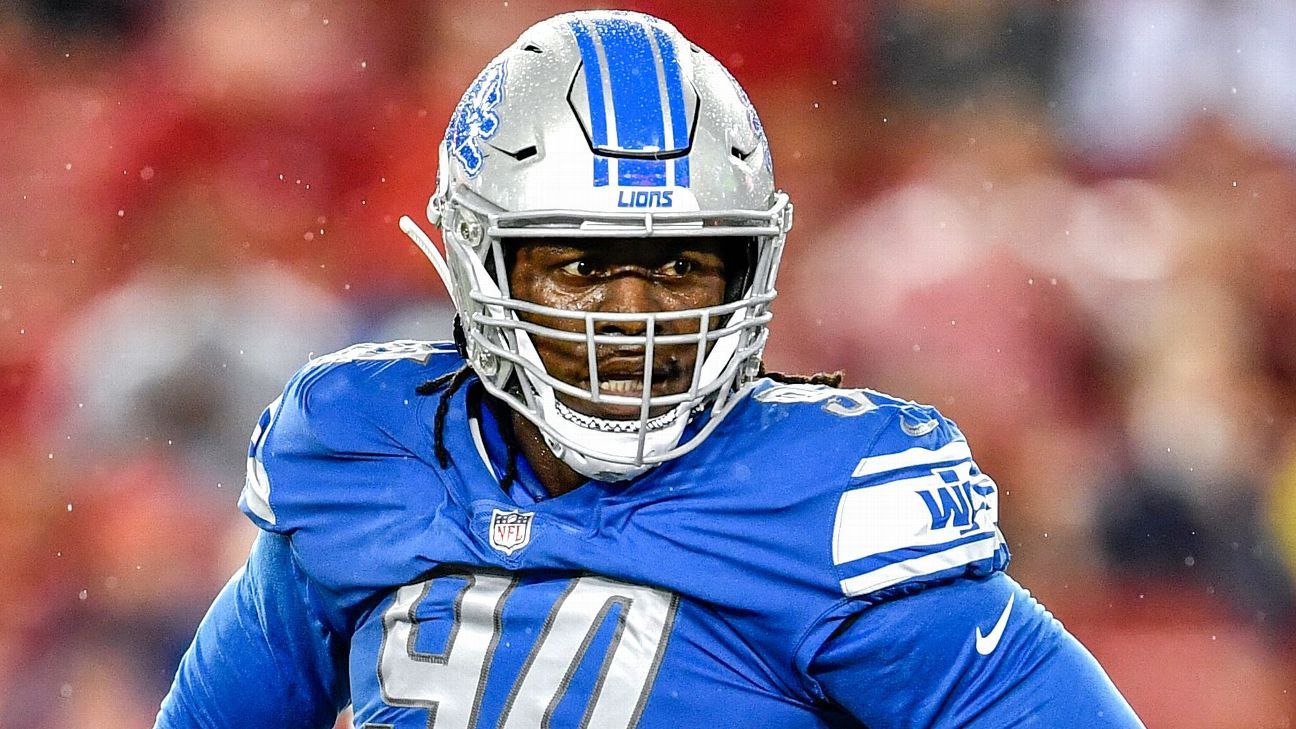 More than half of ESPN’s top 100 NFL free agents for 2019 are either signed or committed to a team as the first week of the new league year closes. Now is the time when smart and/or patient teams dig in and start searching for bargains that can help them in defined roles.

Who could those bargains be? Here are 15 of the top remaining players on the open market.

Note: Baked into this list are a number of long-standing market variables. Age is a major factor (the sweet spot is 26). Quarterbacks are overvalued for obvious reasons. Teams are more desperate for pass-rushers and outside receivers than they are for safeties or veteran running backs.

Age and a long injury history will limit his value. Most recently, two shoulder injuries cost him nine games in 2018. But he had 48 sacks in six seasons with the Lions, and a team with a plan to use him situationally could receive big dividends.

Houston hasn’t produced double-digit sacks, nor played in 16 games, in a season since 2014. But he remains a force for opposing offenses to account for.

Primarily working in the slot, Callahan started 10 games in 2018 and 29 in four seasons with the Bears. He would help a team that faces highly productive slot receivers. According to Pro Football Focus, opposing quarterbacks had a 78.9 passer rating when targeting Callahan in 2018, among the five lowest in the league.

Suh had a quiet season by his standards in Los Angeles, even while playing next to All-Pro defensive tackle Aaron Donald. But Suh remains remarkably durable and hasn’t missed a start the past seven seasons. He has more years left in him as a contributing player, if not an elite one.

Previous ranking: N/A (Berry was released by the Chiefs on March 13)

Injuries have limited Berry throughout his career, most notably forcing him to miss 29 games over the past two seasons and slowing what once looked like a Hall of Fame career. But he has a largely clean bill of health and could still have some gas left in the tank.

Back surgery cost him 13 regular-season games, but Jernigan returned to start the final three and both of the Eagles’ playoff games in 2018. Philadelphia declined to pick up a $11 million option, but presuming his back is healthy, Jernigan is an attractive target.

The Broncos effectively nudged Barrett out by making Bradley Chubb their top pick in the 2018 draft. But Barrett considers himself a starter, and teams can look back at his 2017 film to see it; Pro Football Focus credited him with 43 quarterback pressures that season.

Does anyone want a 33-year-old pass-rusher who has averaged 5.6 sacks over the past four seasons? Those statistics don’t tell the whole picture, of course, and the Packers have at times used Matthews at the less-visible middle linebacker position. But there is no doubt that it has been a while since Matthews was at his best.

A rock-solid slot cornerback is more valuable than you might realize on the open market. Dennard was part of a secondary ranked among the top 10 last season by Pro Football Focus.

After years of wandering, Cook put together the two most productive seasons of his career while with the Raiders in 2017 and 2018. He caught 122 passes for 1,584 yards and eight touchdowns over 30 games during that span and was named to the Pro Bowl in 2018. Age and previous durability issues could hamper his value.

Barron was one of the first hybrid safety/linebackers of this era. He will remain relevant in the right system, even after the Rams released him.

Adam Schefter discusses Mark Ingram’s intention to sign a three-year contract with the Ravens to become the lead back in Baltimore.

Were it not for a torn ACL suffered in November, Darby would be more highly sought after. He always has managed to be around the ball in pass defense, even if his tackling has occasionally left something to be desired.

Previous ranking: N/A (Crowell was released by the Jets on March 14)

Released after the Jets signed Le’Veon Bell, Crowell has rushed for nearly 2,500 yards and 15 touchdowns over the past three seasons. And at 26, he is young enough to project future production, as well.

The Jaguars put a relatively light 636 touches on Yeldon’s body over the past four seasons, and he has proved productive in the passing game. But public criticism from Jaguars executive vice president Tom Coughlin late last season will give teams an extra layer to investigate.

A failed physical from the Panthers scuttled his 2018 value and left Breeland unsigned until September. He appeared in seven games with the Packers, starting five.