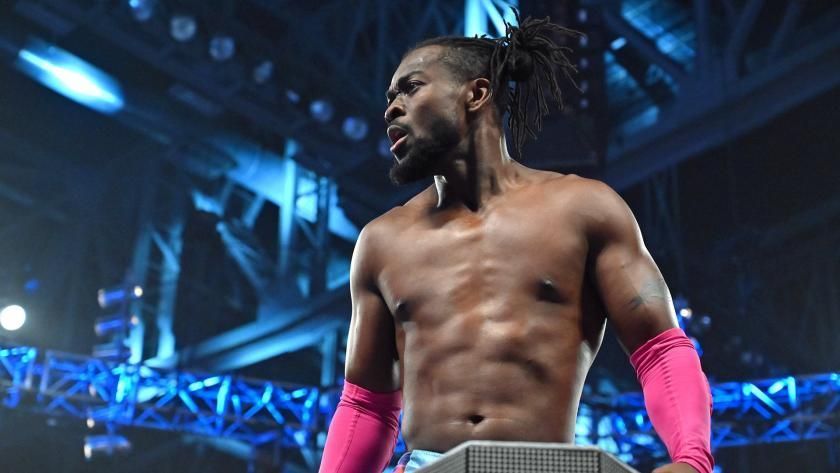 WrestleMania 35 is just a few weeks away, and as the last few details sort themselves out for the biggest WWE show of the year, a handful of stars has gone above and beyond in their push to make the biggest splash on April 7.

Kofi Kingston, in the midst of the biggest moment in his career with a likely (if bumpy) path to a WWE championship match at WrestleMania, has made the most of every opportunity that’s come to him over the last two months. From his last-minute entry in the Elimination Chamber, to his eye-popping gauntlet match performance, to all of the character work Kingston and The New Day have done opposite Vince McMahon, there’s no denying the natural groundswell behind a long overlooked superstar.

It should come as little surprise, then, that Kingston has charged from out of nowhere to become the new No. 1 in the ESPN WWE Power Rankings, The race was close, with Roman Reigns, Becky Lynch and Daniel Bryan each receiving first-place votes and narrowly missing out in their own right, but the message couldn’t be clearer — Kingston is finally getting his shot, and he’s killing it.

It’s hard to imagine that, in 11 years with the WWE, Kingston has never received a one-on-one world championship match. He seemed close to a top-tier opportunity in October 2009, opposite Randy Orton, but Kingston ultimately helped John Cena become champion rather than vie for the title himself. There have been a handful of multi-way world title chances, from Royal Rumbles to Elimination Chamber matches — and even one of those was snatched away by Edge at the last moment.

WWE fans can occasionally be accused of cheering for something different simply for different’s sake, and while the initial excitement about Kingston’s involvement at Elimination Chamber might have al sparks that ignited the flame, it’s become so much more than that. New Day breathed life into dormant tag team divisions on multiple occasions because of their endless creativity in and out of the ring, but oftentimes got overlooked simply because of how tag teams are often shuffled to the side in favor of singles stories and rivalries.

Given the chance to plead Kingston’s case, Big E, Xavier Woods and eventually Kingston himself cut the best promo of their careers while in the ring with Vince McMahon. The heart, the struggle, the effort and the creativity of the New Day’s collective efforts have energized the WWE audience in a way few others have in this era.

No matter what lies ahead on Tuesday, when Kingston tries to run the gauntlet again to win his way to WrestleMania 35, he’s an undeniable force who has finally earned the chance to prove himself as one of the best WWE has to offer. — Tim Fiorvanti

The ESPN WWE Power Rankings are determined by a panel that determines positioning based on their perceived valuation each wrestler has to the on-screen WWE product. Numbers in parenthesis ( ) indicate first-place votes.

As the last few weeks before WrestleMania 35 play out, Kingston’s journey is reminiscent of Daniel Bryan’s WrestleMania 30 journey in a lot of ways. Appropriately enough, Bryan happens to be the WWE champion he’s chasing. Kingston appears to have a clear path to defying the authority (mainly Mr. McMahon) on his way to a WWE championship match on the grand stage of WrestleMania. Time will tell if he’ll get there, with the actual opportunity at hand on Tuesday, and he has the support of the vast majority of the fan base who are expecting a major payoff — Sean Coyle

Roman Reigns isn’t on this list because he overcame leukemia for the second time, a feat that in and of itself is enough to justify a lot of positivity and forward momentum. He’s also shown a completely different side to his character since returning to the WWE. Reigns, who was often criticized for his mic skills, is cutting the best promos of his career on a weekly basis as he folds more of his real personality into the character. The Shield reunions are hard to keep up with at this point, but no one will forget their match at Fastlane. You could tell all three performers were genuinely cherishing what could be their last match together, at least for a while. Reigns has sometimes needed his Shield-mates in the past to stay on the good side of fans. Now, he appears to be just fine on his own. — Michael Wonsover

Lynch’s road to the Raw women’s championship has been an overly complicated one at times, sometimes to a fault, but she has maintained her immense popularity throughout the process. By throwing away her crutch as she walked to the ring on SmackDown and summarizing all of the excessive twists and turns along the way in a single promo, she pushed the rivalry forward beyond some of the rougher points. Lynch is the most popular superstar on the WWE roster and will have the opportunity to capitalize on that with the ultimate WrestleMania moment, should she defeat Ronda Rousey and Charlotte Flair for the Raw women’s championship to close out the show. — Coyle

Daniel Bryan continues to impress in what is becoming the best run of his career. Bryan shined as the ironman in his defense of the WWE championship at Elimination Chamber. His triple threat match against Mustafa Ali and Kevin Owens at Fastlane was a pleasant surprise, given how quickly it was thrown together. It’s amazing that five years after Triple H and Stephanie McMahon called Bryan a “B-plus player”, Bryan has become the entitled bully who, on this week’s SmackDown called Kingston a “B-plus player” via Vince McMahon. Bryan proved he’s much better than that grade a long time ago, but he’s on an entirely different level right now as the “Planet’s Champion”. — Wonsover

With the final reunion of The Shield now in his rear-view mirror, Rollins can turn his focus back towards his primary journey — once again standing on his own with a WrestleMania match against Brock Lesnar. Rollins has been the backbone of Raw for the past year, and outside of the unfulfilling feud with Dean Ambrose, every engagement has been top notch. He’s one of the most important performers in the entire company, and winning the Universal championship against Brock at WrestleMania would lock in his status as one of the WWE’s best — and allow for the start of a number of creative storylines that fit his style perfectly. — Andrew Feldman

Rousey’s Twitter war with Becky Lynch is a reminder to never underestimate the value of kayfabe. Sure, no one truly believes that these two are going to engage in an actual fight, but their highly personal exchanges on social media makes it very easy for many fans to get caught up in thinking Rousey and Lynch actually hate one another. That element is key to getting fans to suspend disbelief and buy into what Rousey and Lynch are selling. — KC Joyner

Upon Batista’s return, I insisted that despite his manhandling of the legendary Ric Flair, it would be all but impossible to make him look like the villain opposite Triple H on the way to WrestleMania. It took all of about five minutes into his first appearance back on Raw for Batista to prove me wrong. After an initial pop from the crowd when “I Walk Alone” hit, the combination of a big security team and a locked in interpretation of an entitled Hollywood star, Batista demanded what he wanted until he got it. It says a lot about Dave Bautista, the man, that despite his role in one of the successful movie franchises of all time, The Avengers, he still wants to step back into the ring and end his career on his own terms.

This match at WrestleMania 35 will look a lot different than the battle between Triple H and Batista had for the World Heavyweight Championship at WrestleMania 21, but it’ll be a strong hook for longtime fans checking back in for the biggest WWE show of the year. — Fiorvanti

McIntyre made a statement with his performance Monday on Raw, laying waste to both Roman Reigns and Dean Ambrose. It wasn’t long ago McIntyre seemed to be on the brink of carrying the WWE on his back, but a sudden affiliation with Bobby Lashley and Baron Corbin has done him no favors. Just go solo, Drew. — Matt Wilansky

About time, right? Not a single performer in WWE deserved a taste of gold more than he did. Joe has the credentials and the cachet to make the United States championship mean something again. The only way he should lose it is when the creative team decides he’s better suited to challenge for the WWE championship. — Wilansky

On paper, Aleister Black and Ricochet as a tag team makes very little sense. Other than their respective pursuits for championships and solid moral code, they share very few character traits in common — but somehow, it’s worked. Amidst a group of main roster moves that have not worked out well for guys like EC3 in recent months, teaming Ricochet and Aleister Black together and giving them significant time in the ring with teams like The Revivall, The Bar, Bobby Roode & Chad Gable and The Hardy Boyz has allowed two of NXT’s best to shine on a bigger stage.

Few could have expected the level of chemistry they’ve shown as a team, but it’s a testament to their creativity and flexibility that they’re pulling it off so well. They’ve provided a nice shot in the arm for Raw, SmackDown and each show’s tag team division ahead of WrestleMania, and they may well have set themselves up for a WrestleMania opportunity right out of the gate. — Fiorvanti