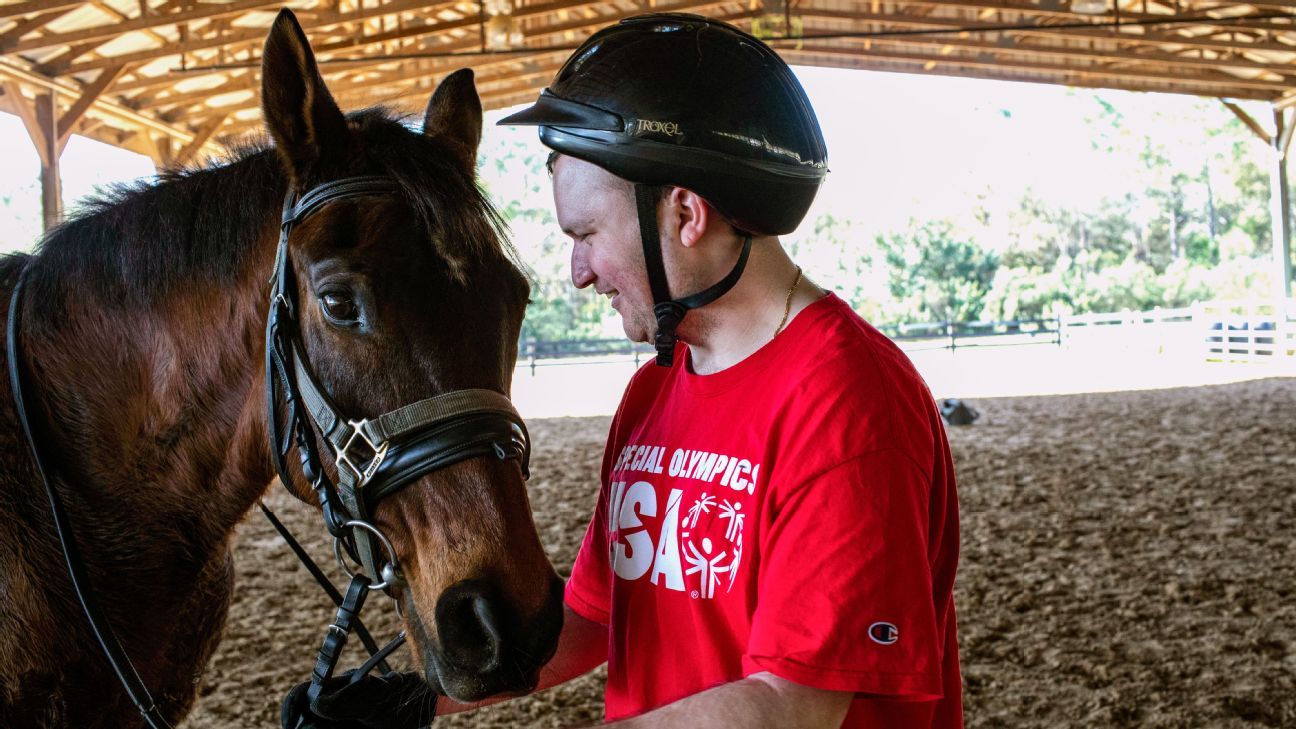 It was just before 11 a.m. at the Bakas Equestrian Center, on the outskirts of Tampa, Florida. The staff carried shovels, saddles and feed, as they alternately cleaned up from the last lesson and prepared for the next one. Soon to arrive was Robert Moore. “He’ll come flying in,” said Dani Johnson, a longtime Bakas employee, with a laugh. She added that the 26-year-old likely would have his music blasting too.

But, with a lighter than usual touch on the gas and his techno turned down, no one noticed Moore pull up — right in time for his lesson. After a quick round of hellos, he headed to the arena, where he was met by his coach for the day, Jen West. Also waiting was a brown 18-year-old gelding named Heineken.

Moore and Heineken would be practicing dressage, a highly artistic discipline in which the rider and horse are expected to move as one through a sequence of delicate maneuvers. West made clear that Moore still had a lot to work on, not the least of which was positioning.

“Row the boat, row the boat,” she called out, reiterating proper hand movements as Moore guided Heineken in slow warm-up circles. For nearly an hour, they worked their way through a laundry list of techniques, from knee lifts to sitting trots. By noon, energy levels were running low.

“I put you through it today,” West called to Moore, satisfied with the progress. But it’s early February, and she also knows time is at a premium.

In a few short weeks, Moore will be representing the U.S. at the Special Olympics World Games in Abu Dhabi (March 14-21), an international competition for athletes with intellectual disabilities. It’s a been a journey — from foster care to World Games athlete (and soon a new last name) — that likely would never have been possible without his parents and the horses they introduced him to.

Moore, who is autistic, started riding at Bakas when he was about 5 years old. Since then, he has amassed an impressive collection of medals, trophies and other accolades (which he recently had added to a few days earlier by placing in three different events at a regional Special Olympics competition).

“I have overcome so many obstacles in my life. I couldn’t talk; I couldn’t walk,” Moore said after practice, sauntering toward his car. He had just finished untacking and washing down Heineken (a name he finds funny because the beer has a “horrible taste”), and as always, he was making sure to say proper goodbyes on his way out.

Robert Moore was born on May 11, 1992, with the legal first name of Bradley. A reportedly abusive birth mother and an absent birth father led the hospital to place him in foster care as an infant. When Moore’s paternal grandmother, Jacqueline Arroyo, now 85, and her husband, Roberto, 68, learned about his situation, they immediately took him in as their son.

But Moore’s first years were also full of hurdles. “We used to sit him down when he was 2, and he looked like a ball,” said Roberto, describing Moore’s early lack of core strength and grip. His speech was also developing slowly.

Roberto, who grew up in Puerto Rico and first came to the U.S. as a minor league baseball prospect in the Boston Red Sox’s farm system, had a thought. He had fond memories of working with horses in his youth, and perhaps the animals might be able to help Moore as well.

That’s when the family found Bakas, which specializes in working with people who have disabilities. Johnson remembers those early days. “We always have the kids stand up [in the stirrups] and hold themselves up for five seconds,” she said. “When he first came, holding it for two seconds was even hard.”

Pulling out of the parking lot after practice, Moore said he has found not only strength through his experience with horses but also his voice. “When I first started riding, I was very shy,” he said, driving to Starbucks for his ritual post-practice grande iced coffee.

Moore lives about an hour away from Bakas, depending on the traffic. That day, there was none, and he exercised his lead foot. “Sometimes I drive like I drive in [‘Grand Theft Auto’],” he said. Moore went on to explain that he’s beaten every version of the video game multiple times and has even found ways to hack his way into the code to unlock special features.

This keen knowledge of computer technology is hardly surprising, given that Moore studied the subject in college. And this fall, he’s aiming to continue his studies at the University of South Florida. Eventually, he’d like to work as an engineer for Apple. “I’m going to continue [pursuing] my dream job,” he said. “I’m not going to stop.”

Moore’s determination is rooted in years of skepticism from others about his abilities. Whether it was horseback riding, driving or going to college, he has been told so many times that he wasn’t capable. Competing at the World Games, for example, was never something he was supposed to make happen. But last summer, Johnson nominated him to the U.S. team, and the reality now nears.

“I’m very happy to go and represent our country,” he said. “I’m also a person who’s representing people with disabilities. Just because I have autism, it doesn’t mean I can’t do anything.”

As Moore pulled into his drive, his black lab, Kimberly, ran out to welcome him. Roberto and Jacqueline greeted him as he walked up to the house. The secluded property and pleasant Florida weather combined to create a wooded oasis of sorts.

Inside, the Arroyo house was horse central. There were figurines, wall hangings and, most prominent, photos of Moore and his horses. From a photo of him at age 5, hugging Roberto at his first competition, through to adulthood, the images span Moore’s life and the horses he had ridden along the way. There’s Walker, Blackjack, Whisper and the fastest of them all, Jet.

Each horse provided a therapeutic connection for Moore. “He couldn’t run and jump like other kids,” Roberto said. “But once he got on that horse, he was a natural.”

The comfort he felt on a horse spread into other parts of his life as well. Whether it was the friends he had made through Bakas, getting more involved with his church, or his now enviable ability to talk to just about anyone with ease, Moore said, “What this program has done is to get me out of my shell.”

Trophies, medals and photos spilled from the living room into Moore’s bedroom, where they continued to spread across the walls. The sheets on his bed were Florida Gator blue, with the orange-and-green logo plastered on the blanket and pillow cases. Moore, who is fluent in Spanish and often speaks it at home, likes to collect his old cell phones (the current count is 21) and currencies from around the world, which he gets from friends. Abu Dhabi, though, will be the first time he has left the United States.

The trip will be full of unknowns for Moore. He doesn’t even know what horse he’ll be riding in Abu Dhabi until he gets there (the local police department will be loaning its steeds to the athletes). But, for Moore, that’s fine. Medals aren’t necessarily his priority. The experience, he says, is paramount.

“I’ve never been to a desert. So I really want to go see that,” he said, also excited to add the dirham to his currency collection and meet competitors who speak other languages. “To hear how they say ‘hello,’ how they say ‘goodbye’ in Arabic, I do want to hear that.”

There is, however, one thing that Moore is looking forward to with perhaps even greater anticipation than the World Games. Roberto and Jacqueline are legally adopting him. About three years ago, Moore learned through a relative that his parents were in fact his grandparents.

“We just didn’t talk about it,” said Jacqueline. “He’s always known us as Mom and Dad.”