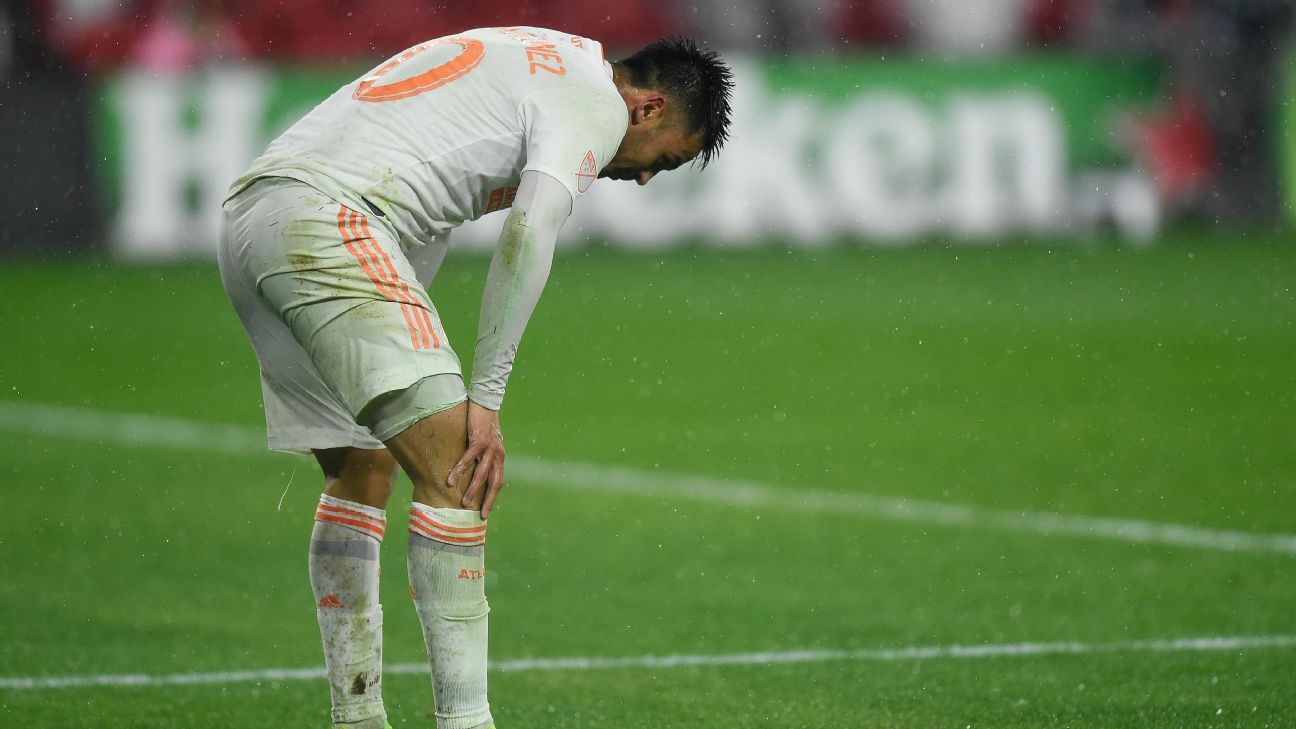 Atlanta United’s 2019 season has gone from bad to worse, and things could end up in a full-blown crisis on Sunday against the Philadelphia Union (7:00 p.m. ET, ESPN+), while a Zlatan Ibrahimovic-less LA Galaxy face surprising Minnesota United and the red-hot Seattle Sounders travel to Chicago to face the Fire.

Even when Atlanta United win, they still lose. Such was the case for the reigning MLS champions, as Wednesday’s 1-0 win over Monterrey in their CONCACAF Champions League quarterfinal second leg meant that Atlanta lost 3-1 on aggregate to the Rayados. That came on the heels of Sunday’s inexplicable 1-1 home draw to FC Cincinnati.

Folks down south aren’t handling this well. The boo birds were out on Sunday, drawing a rebuke from new coach Frank de Boer, who then subsequently apologized for calling Atlanta fans “spoiled.”

Not only is De Boer feeling the heat, now the complaints about new arrival “Pity” Martinez are getting louder. This is an overreaction and a bit too much of a hot take. Anyone who watched Martinez at River Plate knows the fantastic quality of this player. Once he has reached full fitness, he’ll be a tour de force.

Until then, Atlanta simply has to find a way past a Union team that won’t have new designated player Marco Fabian in the fold due to his red card last week. But if Atlanta is held again at home, the love affair that has existed between this team and this city for the past two-plus years will need some serious counseling.

Things have quickly turned sour in the City of Angels. After a nice comeback 2-1 win over Chicago in Week 1, the Galaxy find themselves heading into a second straight week with no Ibrahimovic. The superstar Swedish striker didn’t make the trip to Frisco, Texas, in last weekend’s 2-0 loss to FC Dallas and all signs are pointing toward another absence against Minnesota on Saturday (10:30 p.m. ET, ESPN +).

The team has been pretty quiet about Ibrahimovic’s injury, but at the age of 37 and with the nature of Achilles injuries, questions must be asked about his prospects in the medium term. If this drags on for a month or two — or, Ibra forbid, longer — the Galaxy will rue their sale of Ola Kamara to the Chinese Super League. The Norwegian bagged 14 goals last season, and combined with a potential loss of Ibrahimovic, it raises a rather important question: Who, exactly, is going to score the goals?

Giovani dos Santos is gone now too, and there’s no room to go out and get a designated player. Giuseppe Rossi was bumping around Los Angeles recently. Could he be an option? Or perhaps the goal-scoring burden will fall onto the 16-year-old shoulders of Efrain Alvarez, who certainly has looked up for it when he has been on the field, but that’s a lot to ask from such a young player.

Meanwhile, Saturday’s opponent, Minnesota United, has got things rolling right now with two wins in two road games to start the season in Vancouver and San Jose. Saturday’s game will be a much sterner test for a defense that coughed up 141 goals in its first two seasons. But a win in Carson, California, would show the rest of the league that Minnesota has its big-boy pants on in 2019.

We’ve grown so accustomed to Seattle starting the season so slowly that it simply became the norm in league circles. But Brian Schmetzer’s team have atypically ripped off a pair of impressive wins to start their 2019 campaign, thrashing newbies FC Cincinnati 4-1 and then Colorado 2-0.

He doesn’t get a lot of headlines, but Raul Ruidiaz has been a scoring machine since arriving last summer, with 12 goals in 16 games. And with Jordan Morris back healthy and already with two goals under his belt, you get the sense that Seattle is poised for something special.

The first road test comes on Saturday in Chicago (1:00 p.m. ET, ESPN+) against a Fire team that has flirted with both ends of the drama spectrum: There was the crushing late 2-1 loss to the Galaxy to start the season, followed by a last-gasp equalizer to grab a 1-1 tie against Orlando City in Week 2. What is certain is that the defensive issues experienced thus far by Veljko Paunovic’s team could be badly exposed by the Sounders.