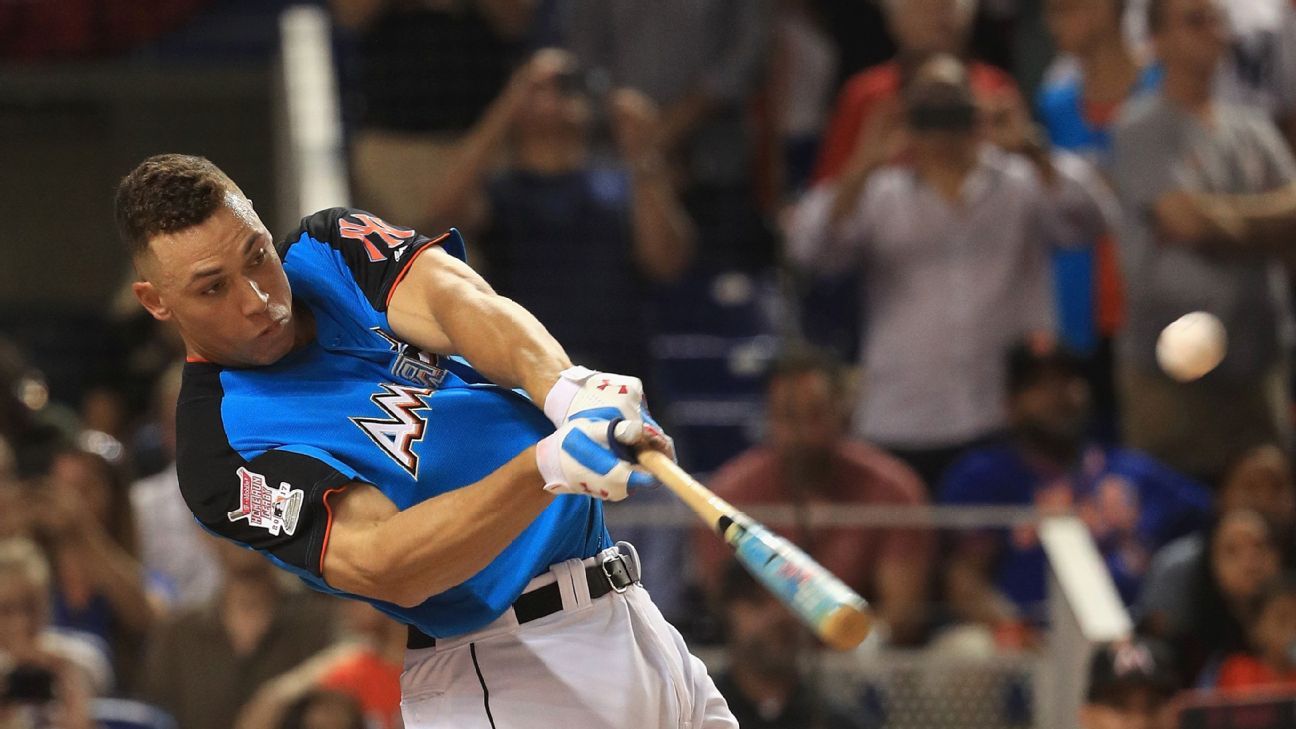 In case you haven’t heard: The stakes of MLB’s annual Home Run Derby just got raised with a $1 million bonus going to the champion, starting this year. With big bucks now on the line, you can expect some big names to come out to compete on July 8 in Cleveland, so we asked our writers to draft one player they would want with all the marbles at stake, make the case for their guy and let everyone know why their pick was better than the one directly before them.

Click here to vote for your favorite from our ultimate $1 million HR Derby field.

Why he’s my pick: Trout is the best at just about everything, so if he decided he wanted to win the Home Run Derby, he would win it. Might not hit the longest homers, but he’d just keep putting the same swing on the ball all through the competition. He would not tire out.

Why he’s my pick: Please, I don’t have to defend Giancarlo Stanton. We’ve all seen him dominate the Home Run Derby in the past and nobody hits more awe-inspiring monster blasts than Stanton.

Why he’s more likely to win than Mike Trout: This isn’t a WAR contest. Trout has never participated in a derby. We don’t actually know if he’d be any good at it

Why he’s my pick: He already won one Home Run Derby, and although he declined to participate last year, you’d have to think a $1 million prize will make him reconsider in 2019. The guy has power to all fields and has been peppering the right-field bleachers all spring. That just means Progressive Field’s mini-monster in left shouldn’t be an obstacle for the righty in this year’s derby.

Why he’s more likely to win than Giancarlo Stanton: OK, if we’re being perfectly frank, the difference between Judge and Stanton in a home run-hitting contest is virtually nil. The two hulking outfielders both hit multiple 440-foot moonshots last season. Still, Judge has this relaxed, fluid, easily repeatable swing that would be the difference-maker over his teammate. Stanton’s shorter, more explosion-based swing can seemingly get out of rhythm easier (the Yankees were quick in 2018 to attribute many of his career-high 211 strikeouts to a matter of timing). And in the derby, good rhythm is just as important as power.

Why he’s my pick: I’ll take the reigning champ, who put on a show in his home turf to win the 2018 derby. Harper has the perfect Home Run Derby swing — loopy, with a high finish and produced by lots of torque. It might lead to highs and lows throughout the regular season, but it is perfect in this setting.

Why he’s more likely to win than Aaron Judge: Judge has about 4 inches and 60 pounds on Harper, but they were basically even in isolated power last season. Judge’s power comes much easier, of course, but Harper thrives in settings like these and might have the edge in endurance during the final round.

Why he’s my pick: Since the start of 2016, nobody in baseball has hit more bombs than Davis, whose 133 homers over the last three years are nine more than the closest guy (Stanton). Even more impressive, the A’s slugger has done it while playing half his games in a cavernous park that’s one of the least homer-friendly stadiums around. At a perfectly ripe 31 years old, Davis has an edge on other contenders because he’s neither past his prime (see: Cruz, Nelson) nor still growing into his power (see: Acuna, Ronald). Most importantly, the Oakland DH fits the prototype: He’s not one of those well-rounded hitters who tend to flame out in derby competition. He’s a masher and he knows it.

Why he’s more likely to win than Bryce Harper: I’m going to ignore the fact that last season, Harper’s average home run distance of 409 feet (sixth in MLB among guys with 25-plus homers) was longer than Davis’ 405 (13th). Instead, I’ll focus on the fact that only two players have won the derby in back-to-back years (Ken Griffey Jr. and Yoenis Cespedes). So the odds are stacked against Harper. But wait, there’s more. When Cespedes went back-to-back, he was playing for the A’s, as was Mark McGwire when he won his derby title. If you’re scoring at home, that’s three derby winners for Oakland, tied for second behind the Yankees (4). If Harper had signed with New York, his derby odds might’ve been higher. But he didn’t, so they’re not.

Why he’s my pick: As the only person in this draft to have written an article titled How To Gamble On The Home Run Derby — a statistical deep dive into past results –I have a huge advantage in this draft, except for the fact that said article concluded “it’s basically entirely random.” More home runs negatively correlated to derby results, for instance. The only really smart selection is a shrug.

However, there were some factors that correlated positively (if weakly) to derby success. The biggest was left-handedness. The second biggest was, uh, let’s call it heftiness — weight. And the third was career batting average. Previous derby experience appears to be a negative quality. (I can plausibly speculate on why each of these would be so, but your time is valuable.) So, while it’s tempting to say “who hit the most home runs last year,” the correct answer is “who is the heaviest left-handed batter with at least plausible power?” The best answers are Justin Bour, Kyle Schwarber, Anthony Rizzo and Adams. My article came out in 2014; since then Bour, Schwarber and Rizzo have all been in the derby, with Bour and Schwarber both doing very well. Adams is the second-heaviest of them, has the second-best career average and is the only one of the four who would be new to the derby. So: Matt Adams, my danged pick.

Why he’s more likely to win than Khris Davis: Davis is a right-handed batter who spots Adams 42 pounds and 20 points of career batting average. I’m honestly not sure whether I picked Adams as an attention-getting gag or not, but I’m 95 percent certain he’d beat Davis.

Why he’s my pick: With short porches down the line in left and right field and reasonable power alleys on both sides, Progressive Field invites home runs from players with across-the-diamond power — and that is J.D. Martinez’s wheelhouse. Factor in a perfect launch angle on home runs — his was 28.2 degrees last season, almost the same as Trout and Judge — and he’s got the ability to scale the mini-monster down the left-field line too. Best of all, Martinez knows his swing intimately and has the capacity to adjust it as necessary.

Why he’s my pick: Like Harper from a year ago, Ramirez will get the hometown advantage as he wrestles the title away from the defending champ. Ramirez has quietly become one of the premier sluggers in the game and he’ll win the inaugural $1 million prize with Cleveland fans cheering him on. It’s a no-brainer.

Why he’s more likely to win than J.D. Martinez: Sure, Martinez is a better hitter overall, but his game isn’t set up for a HR Derby-type event. J.D. might win MVP in 2019, but he won’t beat Ramirez in his home park.