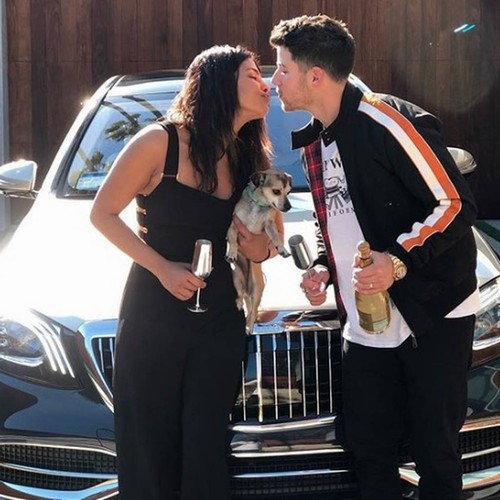 Nick Jonas marked the success of the Jonas Brothers’ comeback single Sucker by splashing out on a luxury car for wife Priyanka Chopra.

Following the news that the brothers’ tune had topped the Billboard Hot 100 chart, marking the group’s first-ever U.S. number one, Nick decided to celebrate by buying actress spouse Priyanka a Mercedes Maybach.

Sharing a snap of herself and Nick sharing a kiss and glass of champagne in front of the vehicle, which was adorned with a giant white bow, on her Instagram page, Priyanka wrote: “When the hubby goes number one, the wifey gets a Maybach. Introducing… Extra Chopra Jonas.. haha .. I love you baby!! Yaaay! Best husband ever.”

Former Quantico star Priyanka, who starred in the video for Sucker alongside Joe Jonas’ fiancee Sophie Turner and Kevin Jonas’ wife Danielle, had previously celebrated the Jonas Brothers’ chart success in a post on her Twitter page, writing: “The Jonas Brothers debut at No. 1 on Billboard Hot 100! OMGeeeeeee (sic)! I Could not be more proud of you guys (screaming inside).”

She and Nick married in December (18), and celebrated their union at a number of parties in both the actress’ native India and Nick’s home country of America.

During a recent appearance on Carpool Karaoke, on The Late Late Show with James Corden, the host asked Nick if he ever got fed up with the amount of post-wedding celebrations he hosted with Priyanka.

“Was there a point during your many weddings that you thought, ‘I’m done with these weddings?'” James asked Nick, who was hooked up to a lie detector machine at the time, and Nick replied, “Yes… It was when I looked at the bill!”