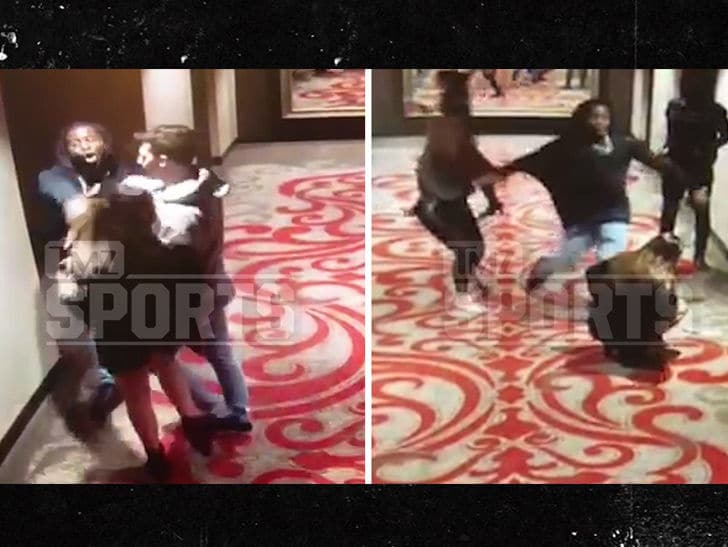 The NFL has suspended Kareem Hunt for 8 games without pay for violating the league’s personal conduct policy — stemming from TWO violent incidents, including an altercation wit a woman captured on video.

TMZ Sports broke the story … Hunt shoved, bull-rushed and kicked a woman at a Cleveland hotel on Feb. 10, 2018.

Cops were called to the scene and investigated — but did NOT arrest Hunt, who denied getting violent.

At the time, Hunt was a member of the Kansas City Chiefs — but the team released the star running back once the video went public, claiming Hunt lied to them about his behavior that night.

Hunt sought treatment for anger management and substance abuse issues — and was later signed by the Cleveland Browns, who were waiting to see what Hunt’s punishment was going to be.

Hunt was also accused of getting violent with a man at an Ohio resort in June 2018 — allegedly punching a man in the face during a heated argument.

The league says, “Hunt has advised the league office that he accepts responsibility for his conduct and the discipline that has been imposed.”

“He has committed to take advantage of available resources to help him grow personally and as a member of the Cleveland community, and to live up to his obligations as an NFL player.”

“The eight-game suspension will take effect as of the final roster reduction on August 31. Hunt will be eligible to play in the Browns’ ninth regular season game.”

“I respect the league’s decision on discipline, and I appreciate the time I spent with Commissioner Goodell last week.”

“I’m grateful for my time with the Browns over the last month and thankful to all the people in the organization that have welcomed me. I also appreciate all of the support from my union through this process.”

“My commitment to earning the trust of the league, my teammates, the organization and this community through my actions will continue, and I understand there is a lot of hard work ahead of me before I’m able to fully return to playing the game I love.”