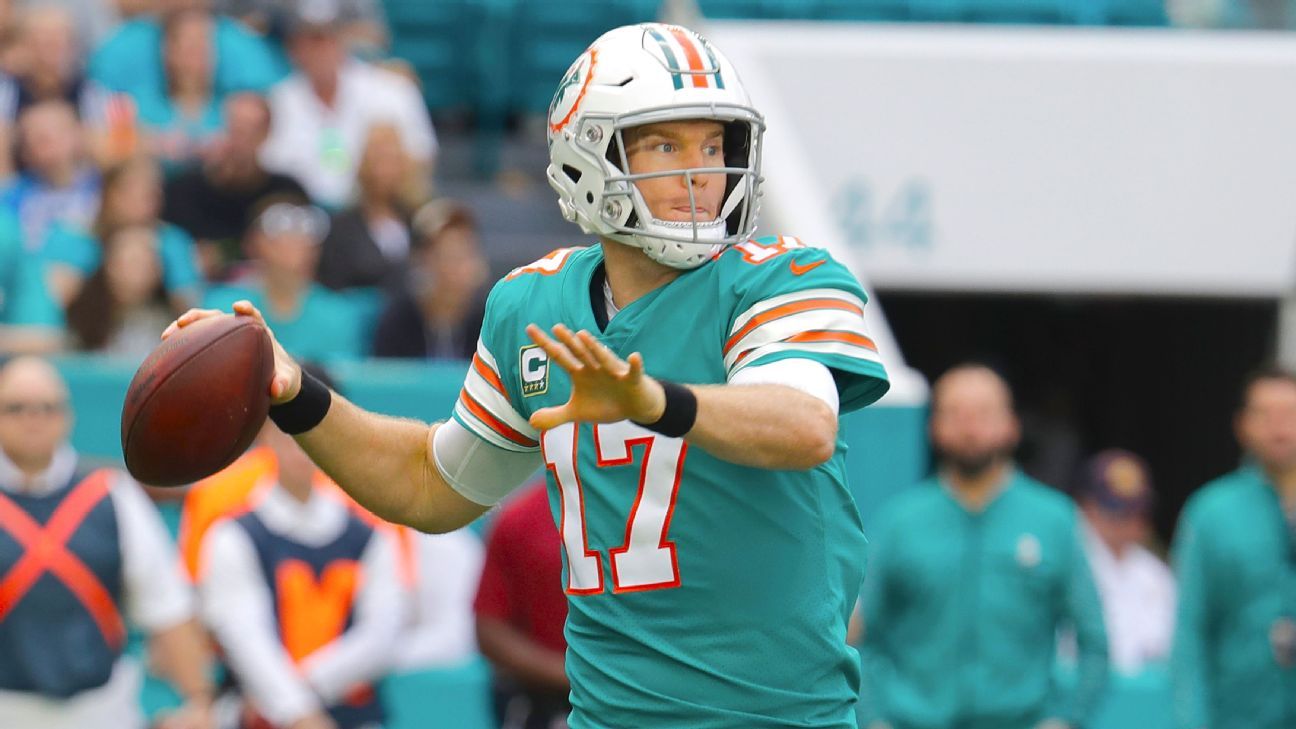 Miami will receive a 2020 fourth-round pick along with a 2019 seventh-round pick in exchange for Tannehill and a 2019 sixth-round pick, a source told ESPN.

Tannehill will become a well-accomplished backup for Marcus Mariota in Tennessee. Miami has a huge quarterback void to fill and seems likely to look toward the draft to do so.

The Titans restructured Tannehill’s contract into a deal that will pay him $7 million fully guaranteed with a chance to make up to $12 million in incentives for the 2019 season, a source told ESPN. The deal was made easier for Tennessee since Miami will pay $5 million of the guaranteed money in the form of a signing bonus, a source told ESPN’s Adam Schefter.

The Dolphins decided to move on from Tannehill earlier this offseason and they’ve spent the last few weeks actively pursuing a trade.

Tannehill was originally due $18.7 million in salary in 2019 and was set to count as $26.6 million against their salary cap. Miami, in the midst of a rebuild, couldn’t justify those huge numbers for a player who clearly wasn’t part of their long-term future.

Tannehill will leave a $13.4 million dead cap on Dolphins salary cap in 2019. But they did get trade value out of a player they were set to release this offseason.

The 30-year-old Tannehill has been the Dolphins starting QB since he was drafted with the eighth overall pick of the 2012 NFL draft out of Texas A&M.

Tannehill’s time in Miami was marked by his lack of availability due to injury and inability to get the Dolphins over the playoff hump. Tannehill has missed 25 games over his last three seasons due to a variety of injuries including a right shoulder capsule injury that cost him five games in 2018.

The injuries also sapped some of what made Tannehill an intriguing quarterback early in his career: athleticism, ability to make plays when they break down and a strong arm with precise accuracy.

For the Titans, they’ve been looking for multiple seasons to find a top-end backup as injury insurance for Mariota. Titans general manager Jon Robinson got creative in a trade to find the best option to fill the role.

Mariota, 25, hasn’t played a full 16-game season in his career. He’s also playing on a fifth-year option worth $20.9 million and he’s set to be a free agent after the season.

Tannehill’s skill set should fit well behind Mariota as both players rely on accuracy and movement to succeed.

The Dolphins spent seven years trying to get a full evaluation of Tannehill, and ultimately they decided it would be a counterproductive same-old Dolphins’ way of thinking to let him get another shot under a new staff. Brian Flores was hired to replace Adam Gase as head coach after the season ended.

The Dolphins now face a new era without a clear answer at quarterback. They have been actively examining quarterbacks in the 2019 NFL draft class, and they seem to be a strong candidate to select a prospect in the first round of this year’s draft or the next one.

The Dolphins currently have just two quarterbacks on their roster: Jake Rudock and Luke Falk. Neither has started a game in the NFL and they’ve combined for five career passing attempts.

Miami will be looking for a veteran quarterback in the coming weeks to add to the roster. Top available free agents include: Colin Kaepernick, Blake Bortles, Ryan Fitzpatrick, Robert Griffin III, AJ McCarron and Mike Glennon.