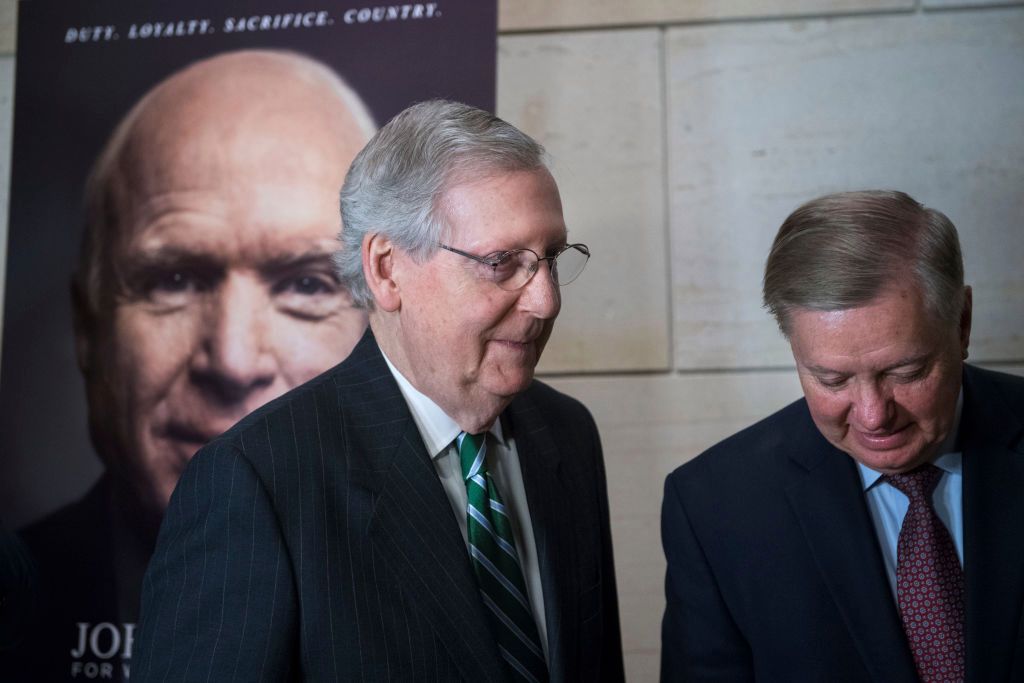 The Equality Act, which would ensure legal protections for members of the LGBTQ community, was reintroduced in Congress on Wednesday. Shortly thereafter, the Human Rights Campaign announced a 167-member corporate coalition in support of the legislation.

But a ThinkProgress review of campaign finance data reveals that, through their corporate PACs, members of that coalition have recently given more than $750,000 combined to the two biggest congressional obstacles to the Equality Act’s passage: Senate Majority Leader Mitch McConnell (R-KY) and Senate Judiciary Committee Chairman Lindsey Graham (R-SC).

While 20 states and the District of Columbia have laws specifically banning discrimination in employment and public accommodation on the basis of sexual orientation and gender identity, dozens of others do not. The Equality Act, co-sponsored by nearly every House and Senate Democrat and three Republicans, would expressly prohibit these and other types of anti-LGBTQ discrimination nationally by adding sexual orientation and gender identity to the federal Civil Rights Act. It also would expand and enhance existing protections for gender, race, and religion.

With strong support from House Speaker Nancy Pelosi (D-CA) and 235 other voting members, H.R. 5 is expected to easily pass in the House of Representatives. But even with 47 public backers of its companion bill, S. 788, its chances of passage in the GOP-controlled Senate are doubtful.

Graham and McConnell are likely to ensure the proposal never gets to a vote. McConnell, a long-time foe of LGBTQ equality, controls whether bills come up for debate in the full Senate. Graham, who has a similarly anti-equality record, determines what legislation gets a hearing in Judiciary, the committee to which the bill has already been referred.

According to PoliticalMoneyLine’s campaign finance data, since the start of the 2016 campaign cycle, McConnell’s campaign committees and his Bluegrass Committee leadership PAC have received a total of more than $639,000 from the corporate PACs for 62 of the companies in the coalition. Graham’s campaigns and his Fund for America’s Future leadership PAC received more than $147,000 from 22 coalition members’ corporate PACs.

The access that comes with campaign contributions could afford these and the other companies a unique opportunity to push McConnell and Graham on the bill. In the last Congress, only a handful of coalition members reported lobbying the House or Senate on the Equality Act, though lobbying disclosure data for the first quarter of 2019 is not yet available.

The bill has been introduced in the past two congressional sessions, but McConnell and the GOP leadership never brought it up for a vote in committee or on the Senate floor.

McConnell boasted earlier this month that he would not bring the House-passed Democracy Act up for a floor vote “because I get to decide what we vote on.”

Neither his office or Graham’s responded to ThinkProgress inquiries about whether they plan to allow consideration of the Equality Act, but a McConnell spokesperson did tell NBC News, “If the Leader issues a statement on this I’ll be sure to forward it to you.”