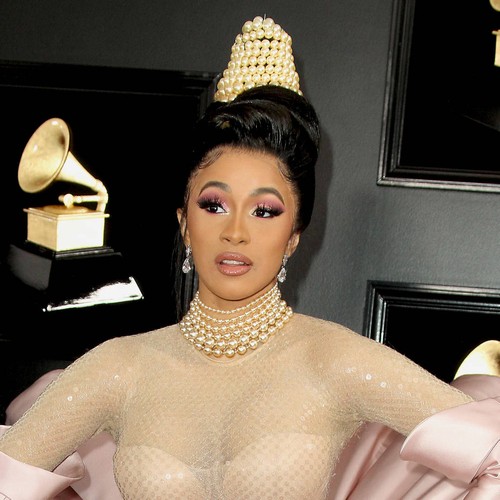 Cardi B licked her trophy as she thanked her haters while accepting the iHeartRadio Music Award for Hip-Hop Artist of the Year on Thursday night (14Mar19).

While the Money star wasn’t at the Los Angeles ceremony, she sent a video acceptance after learning of her victory, and thanked those who have pushed her to work harder in a heartfelt speech.

“I’m sorry iHeartRadio that I wasn’t able to make it. You know I’m busy doing a couple things, but I just want to say thank you so much,” she said.

“You know, I gotta thank my haters, you know what I’m saying. Y’all be saying mean things and y’all be thinking those mean things is gonna discourage me, but that just makes me go harder because if everybody gives compliments, I get comfortable. So I go harder, thank you!”

Cardi concluded her speech with her catchphrase “Okurrr”, before licking the gong suggestively.

She later reflected on the speech by tweeting: “Who saw my iheart acceptance speech”, with many fans jumping to praise her “inspiring and hilarious” words.

The award was one of two Cardi took home – she also won Best Collaboration for her song with Bruno Mars, Finesse. However, she had been nominated for an incredible 14 gongs at the ceremony.

Cardi had earlier hit headlines with an Instagram video on Thursday, in which she explained that she has a short attention span and has a “voice in her head” that means she often isn’t really listening when people try to talk to her.
Many of her fans took the admission as an opportunity to tell Cardi about their own mental health issues, with one tweeting that “some of us have depression Cardi”.

The Bodak Yellow star then replied: “A lot have depression cause ya be on the internet lookin at people with these fake perfect lifes, perfect body,perfect relationships.Depression is hard to shake off spend time with friends,close1 or with yourself do boards wit pictures of the things you dream make them your hobby (sic).”

She added that she’s a big fan of “boards full of life goals”, explaining: “Its very encouraging! It makes you feel motivated and better .Google ways on becoming a millionaire and think about how you going to s**t on people.”