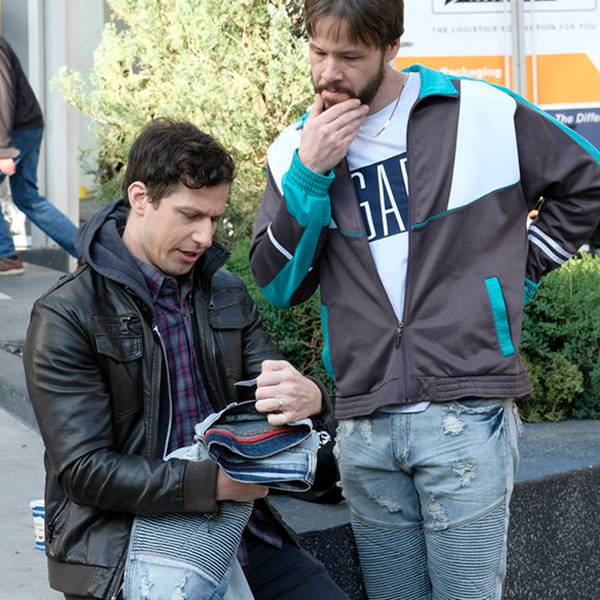 Charles’ family might be in trouble on Brooklyn Nine-Nine.

We’re not talking about the Boyle fam and its many, many, many cousins, but we’re actually talking about Charles’ adopted son, Nikolaj. In the exclusive clip above, Ike Barinholtz makes his debut on the series as none other than Nikolaj’s birth father, Gintars.

Of course, he could be a lying criminal as so many people do end up being on this show, but he does have a pretty solid(ly insane) explanation for Dragomir, the 34 year-old man who had been claiming to be Nikolaj’s brother.

You see, it turns out that Dragomir is actually Nikolaj’s brother, but also his uncle, because Gintars and Dragomir are also brothers. Makes sense!

We don’t yet know why Gintars and his double denim are in town or how he knew where to find Nikolaj, but this can’t be good news for Charles. In tonight’s episode, Gintars’ arrival prompts Jake and Charles to investigate the deal with Nikolaj’s birth family, while Holt and Amy bring in a famed forensic scientist to help Rosa with a case.

I am on the American television program called @nbcbrooklyn99 TONIGHT and I believe it will be hilarious so let’s watch! pic.twitter.com/AZT1sodXbf

“I have been a huge fan of Brooklyn Nine-Nine and was at a charity auction and bid on an item that allowed you to do a guest spot on any TV show and I picked them!” Barinholtz joked about his guest spot. “I’ve been friends with Dan Goor and Andy Samberg for a long time and to get to work with them and Joe LoTruglio was a joy.”