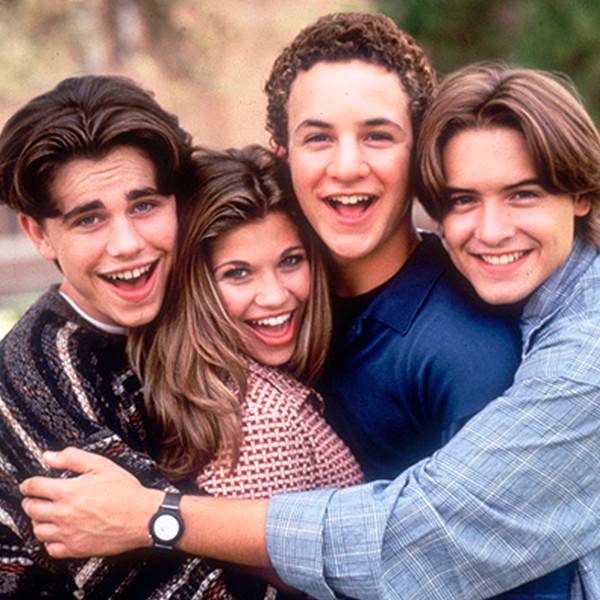 Main cast members Ben Savage, a pregnant Danielle Fishel, Rider Strong, Will Friedle and William Daniels—Mr. Feeny himself, got together on Thursday at the 2019 Emerald City Comic Con event in Seattle.

“Dream. Try. Do Cons. #emeraldcitycomiccon,” Fishel, who is 37 and expecting her first child this summer, wrote on Instagram, alongside a group photo.

“Always my teacher and friend,” the actor wrote.

Fishel played Topanga Lawrence on the teen series, which ran for seven seasons until 2000. Savage, 38, played her love interest Cory Matthews. They reprised their roles on the spinoff Girl Meets World, which ended a three-year run in 2017.

In fact, most regular and recurring stars of Boy Meets World have reprised their roles on Girl Meets World, including Daniels.

Check out the cast of Boy Meets World, now and then!

What can we say about Cory Matthews? We were there for all of Mr. Matthew’s biggest moments in life: His first kiss, his first fight, the first time he drank beer, the list goes on and on. Although Cory started off the series as an energetic, sport-loving C-student, fans grew up with Cory and watched him become a loyal man with a kind heart.

In 2014, Ben Savage and co-star Danielle Fishel reunited and reprised their roles on the Disney Channel spinoff Girl Meets World. The show lasted three seasons. Since, then, he has appeared on shows such as The Leftovers, in which he mad a cameo, and Still the King. 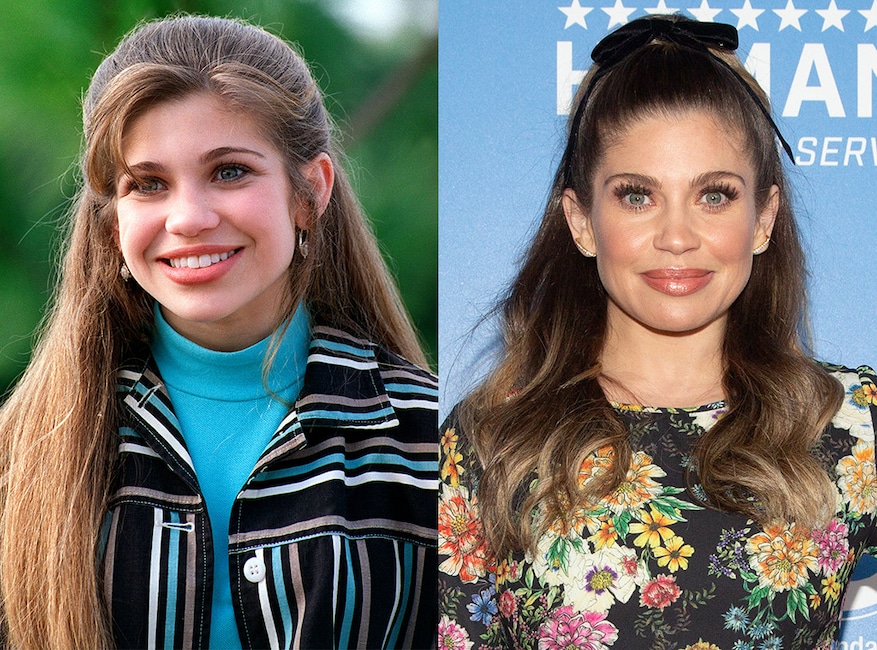 Topanga Lawrence was the perfect girl next door. She was kind, sweet, ridiculously intelligent, passionate, forgiving and the best hippie-girl-turned-hot-woman we’ve ever seen. She taught us that vanity is not a trait worth having (remember when she cut off those long, gorgeous locks to make a point?!) and she taught us that it’s okay to declare that you found your soul mate when you were five.

Danielle Fishel starred with co-star Ben Savage in the Disney Channel spinoff Girl Meets World, which lasted three seasons until 2017. A year prior, she divorced her first husband, Tim Belusko, after more than two years of marriage. In 2018, she married Jensen Carp and several of her Boy Meets World and Girl Meets World cast mates attended her wedding. Fishel and Carp are expecting their first child, a boy, in July 2019. 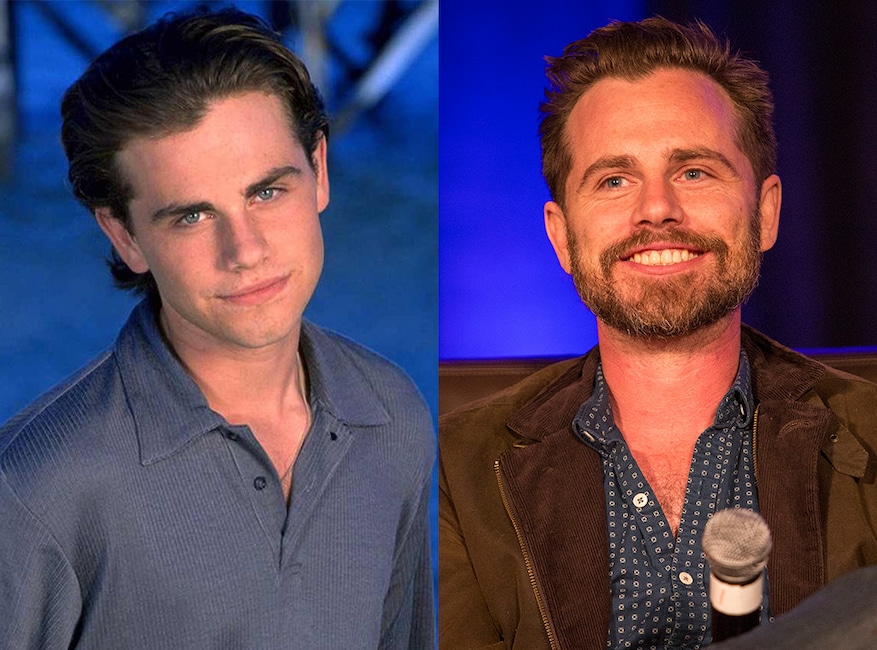 Shawn Hunter was Cory Matthew’s bestest bud of all time and his partner-in-hijinks. Although he had a rough upbringing and was a bit of a smartass at times, Shawn’s passion for life was able to overshadow his bad-boy ways. Plus, can we talk about his hair?! Perfection.

Rider Strong reprised on several episodes of the Disney Channel spinoff Girl Meets World, which ended in 2017 after three seasons. Over the past couple of decades, Strong has also appeared in films like Cabin Fever and joined his fellow BMW alum Will Friedle as a voice on the animated hit Kim Possible. The former child star also turned to filmmaking along with his brother Shiloh Strong.

In 2013, Strong married Alexandra Barreto. Their son, Indigo, was born a year later. 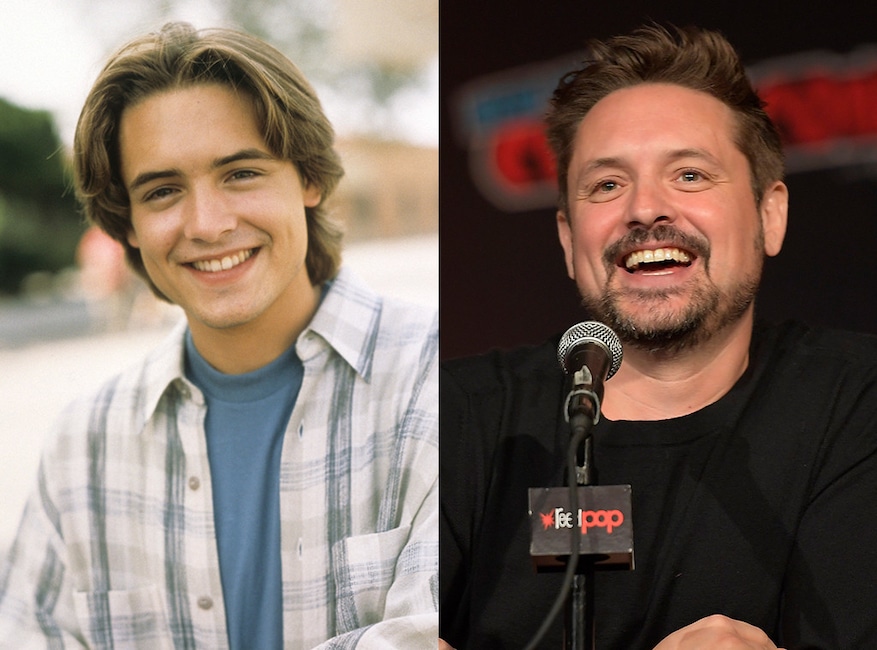 Will Friedle as Eric Matthews

We would have done unspeakable things to have Eric Matthews as our older brother. Sure, he was a little intellectually challenged at times, but his passion for life was infectious. Plus, he gave us the incredible motto: “Life’s tough. Get a helmet.”

Will Friedle reprised his role on a few episodes of Girl Meets World. He has also appeared on shows like Critical Role and has lended his voice to a number of popular animated shows such as Kim Possible, Teen Titans Go!, and Guardians of the Galaxy. 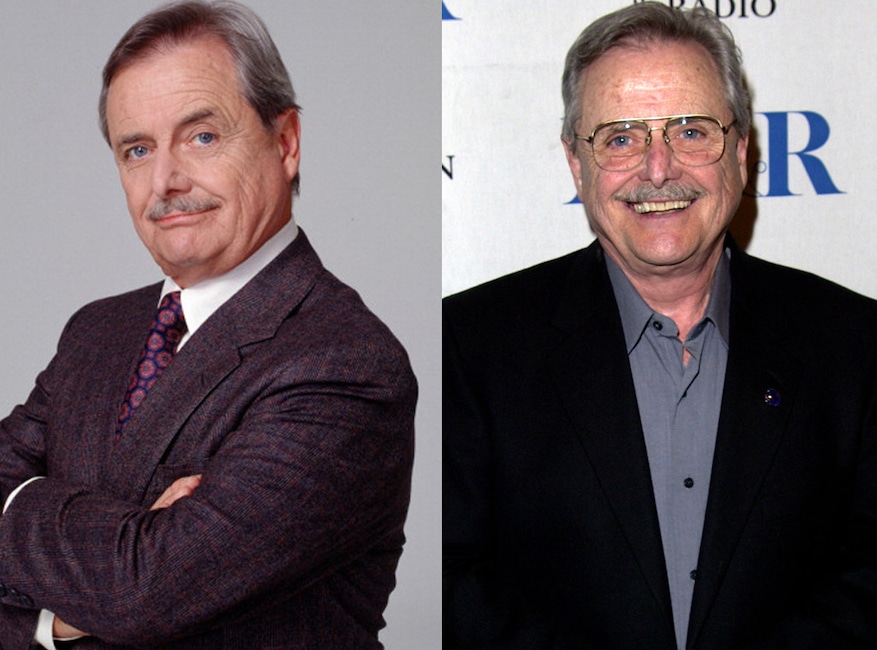 Mr Feeny, (or as Eric would put it, Mr Fee Hee Heeenay!) was the teacher that we all wish we had growing up. Although he was strict at times, Mr. Feeny truly cared for his students and could turn any situation into a opportunity for growth and learning.

William Daniels appeared on a few episodes of Girl Meets World and in recent years also starred on shows such as Grey’s Anatomy.

The actor has been married to Bonnie Bartlett since 1951. They have two sons. 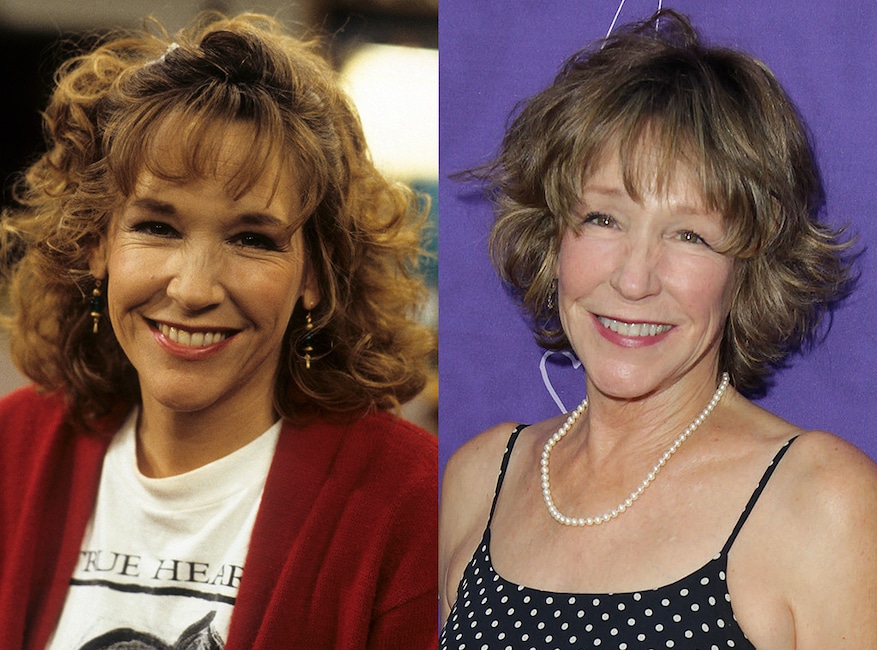 Amy Matthews was the TV mom that everyone wishes was their own. She was smart, kind, strong and even though she wasn’t always supportive of Cory and Topanga’s choices, she loved them both unconditionally.

Betsy Randle, a married mother of two, reprised her role on a few episodes of Girl Meets World and continues to act. 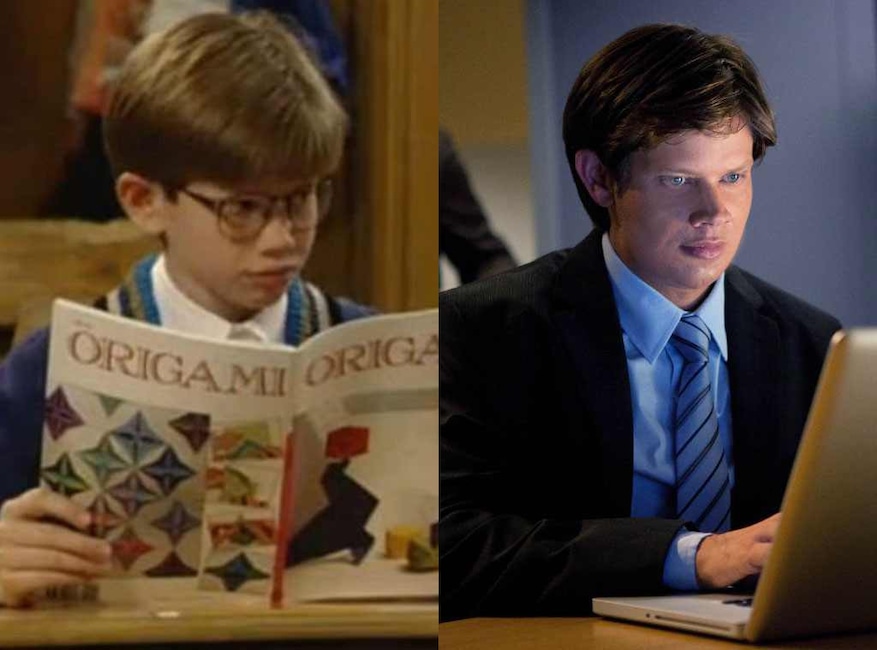 Minkus was the haughty know-it-all who sucked up to Mr. Feeny and constantly showed-off his know-it-all skills in the first few seasons of Boy Meets World. Minkus mysteriously went MIA for four years after Cory and Shawn willed him to disappear. Fortunately, he returned in season five, fully intact, for the gang’s high school graduation. So where had he been? “Just the other part of the school…over there.”

Lee Norris went on to play another small-screen geek, Marvin “Mouth” McFadden, on The CW’s long-running drama One Tree Hill and also reprised his role on a few episodes of Girl Meets World. He has also appeared on a couple episodes of The Walking Dead. 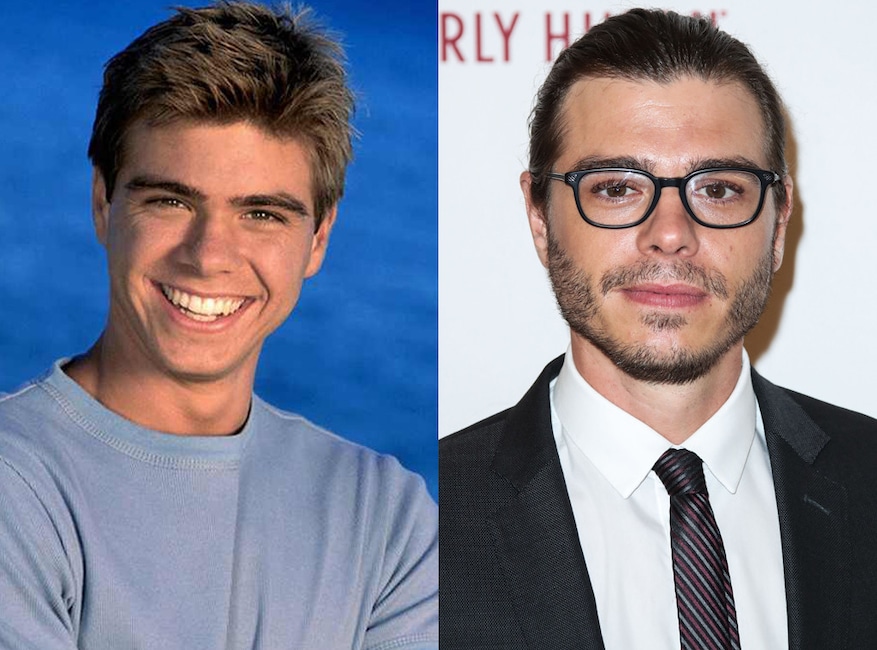 Since his Boy Meets World fame, Matthew Lawrence scored guest roles on CSI: Miami, Boston Public, and made a fun appearance alongside his older brother, Joey Lawrence, on Melissa and Joey. He also reprised his Boy Meets World role on an episode of Girl Meets World. In recent years, he has also had parts on shows suchh as Hawaii Five-O.

In 2018, Lawrence got engaged to Dancing With the Stars pro Cheryl Burke. 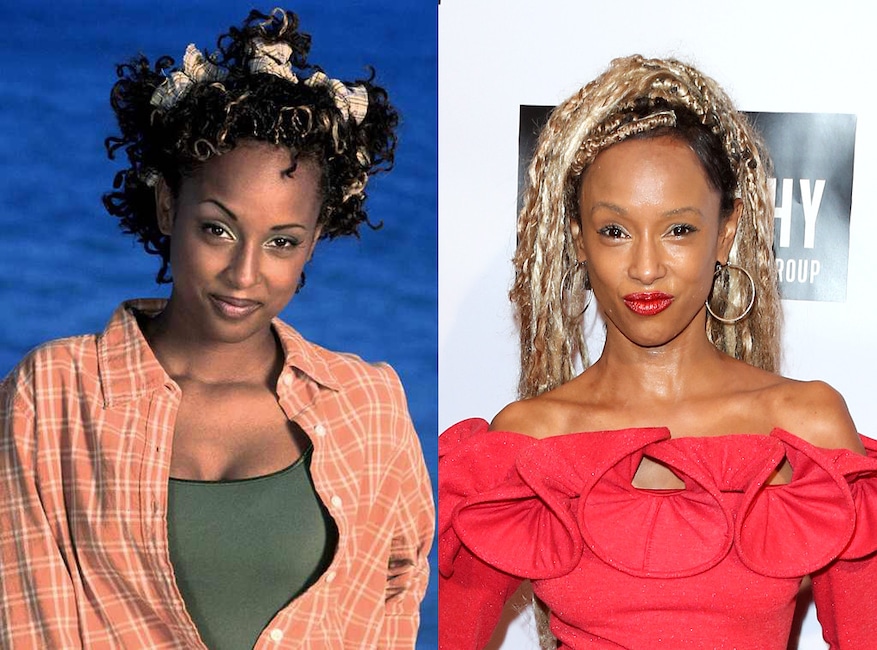 Angela was the only girl who was able to tame Shawn Hunter’s wild, girl-loving ways. She was the perfect match for Shawn and together the two of them experienced many firsts. Although we’re not sure if Angela and Shawn ended up happily married like Cory and Topanga, we will probably get the answers soon when Rider Strong appears on Girl Meets World!

Trina McGee has been in a number of made-for-TV movies and short-lived TV series and also reprised her Boy Meets World role on an episode of Girl Meets World. 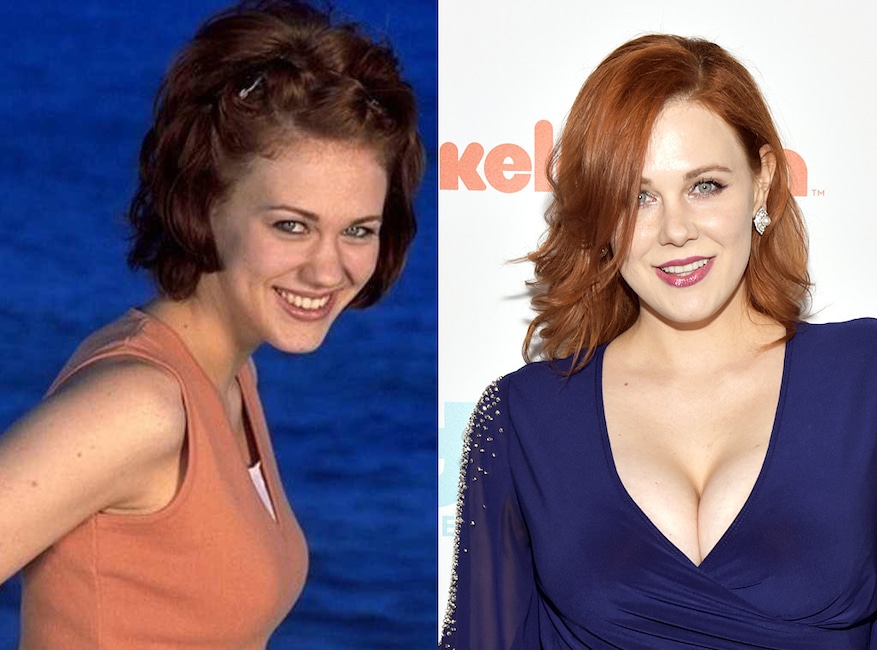 To put it in Eric’s terms, Rachel was his and Jack’s “hot, hot, hottie, hottie, hot, hot” roommate in the college years of BMW. Although both Eric and Jack competed for her affections many times, Rachel ultimately decided that she just wanted to be friends with the boys. (And yes, we still think she’s crazy.)

Maitland Ward‘s on-screen career has been pretty sparse since the show ended its seven-season run in 2000, but she did appear in 2004’s White Chicks.

Ward has been married to Terry Baxter since 2006. 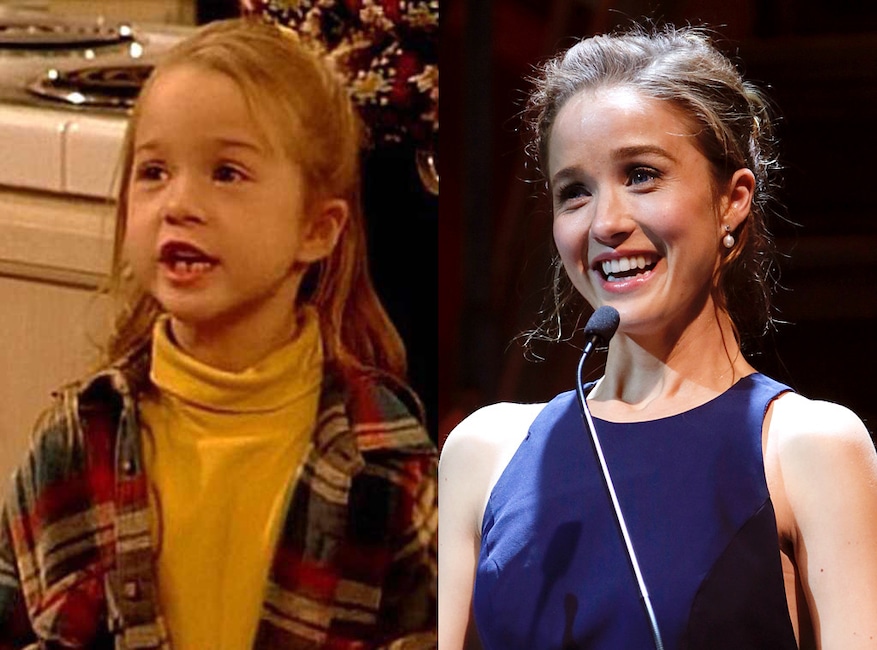 When Boy Meets World first premiered, fans met Eric and Cory’s younger sister, Morgan, a pint-size blonde with a knack for bugging her older brothers. Although this first actress was later replaced, Lily Nicksay Gibson did the honors of playing Morgan from 1993 to 1995.

Since the series ended, the actress guest-starred on a few TV shows, including The Mentalist, 8 Simple Rules and Judging Amy. She also reprised her BMW role on an episode of Girl Meets World.

Gibson has been married to songwriter Dave Gibson since 2015. 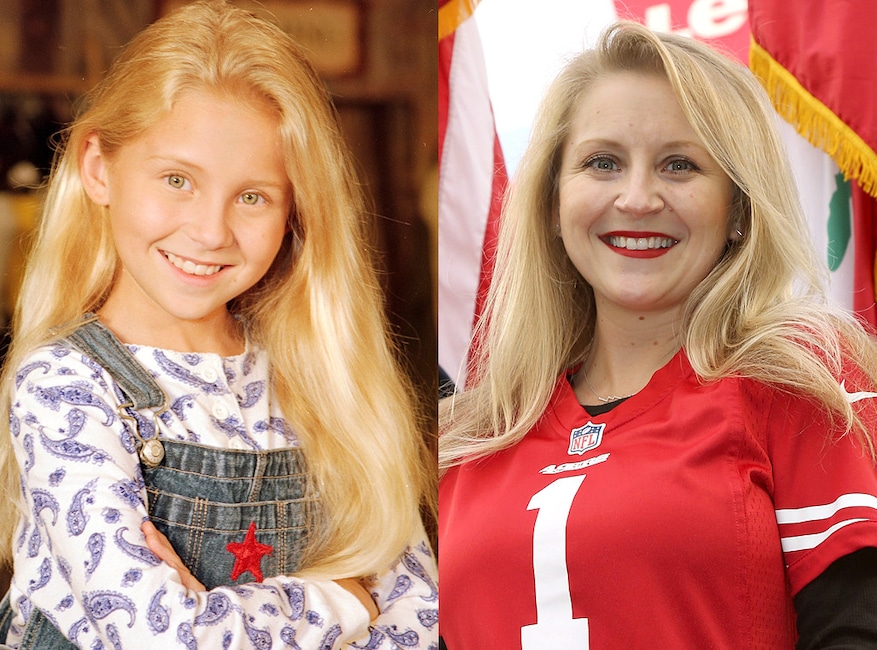 After the “longest nap ever,” Morgan re-appeared from a year of absence as an older and entirely different girl.

Lindsay Ridgeway, who took over the role as the Morgan in 1996 until the series’ end in 2000, has stayed out of the spotlight since BMW‘s Lindsay graduated from the University of California, Riverside in June 2007, and she then received her Masters in Counseling from the University of Redlands in 2010. A gifted singer, she has performed the National Anthem for many professional sports teams around Los Angeles, and she worked part time for the Los Angeles Kings hockey team as a member of the King’s Crew.

In 2017, she reprised her BMW role on an episode of Girl Meets World. 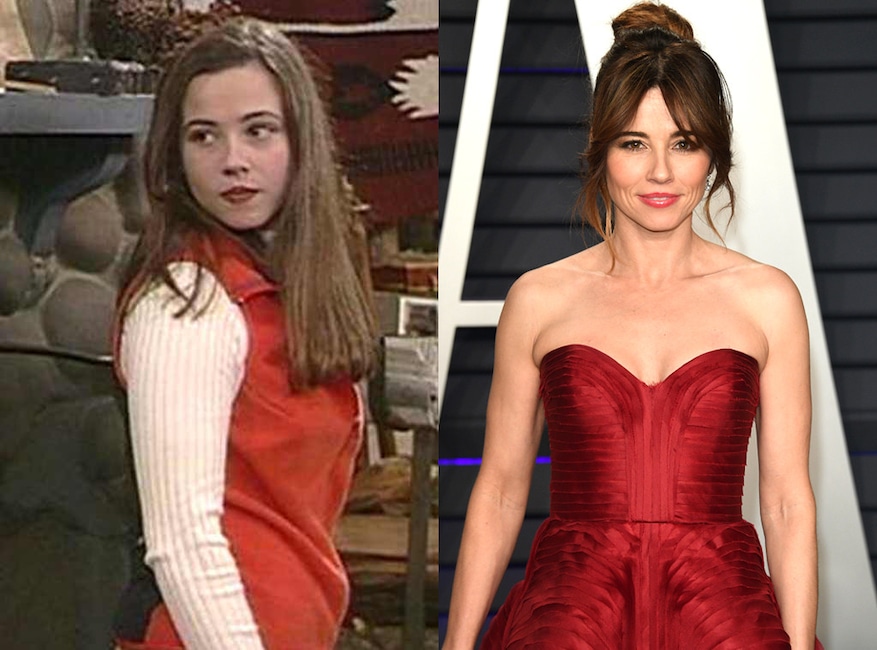 Lauren was honestly the worst. We all remember the time that Cory and Topanga broke up, right? Well, it was all her fault! In addition to kissing Cory at the Mount Sun ski lodge (against his wishes!), Lauren then wrote down all of her feeling for him in a letter. Later, when it fell out of Cory’s bag, Topanga found it, learned of their up-all-night talking sesh and our beloved couple was on the rocks for many episodes after that.

When she’s not trying to break up soul mates, Linda Cardellini often plays other characters who ruin people’s lives—and very well. On ER, her characters’s ex-husband started a shootout in the hospital. On Mad Men, she played a married woman who, against her better judgment, consistently slept with Don Draper. On New Girl, Linda played Jess’ outrageous older sister who was the catalyst for Nick and Jess’ break-up. (If she hadn’t forced them to move in together, it wouldn’t have happened so soon!)

In recent years, the popular actress, who first rose to fame in 1999 with Freaks and Geeks, appeared in movies such as the Oscar-winning Green Book.

Cardellini is also a mom; she and partner Steven Rodriguez share a daughter, born in 2012. 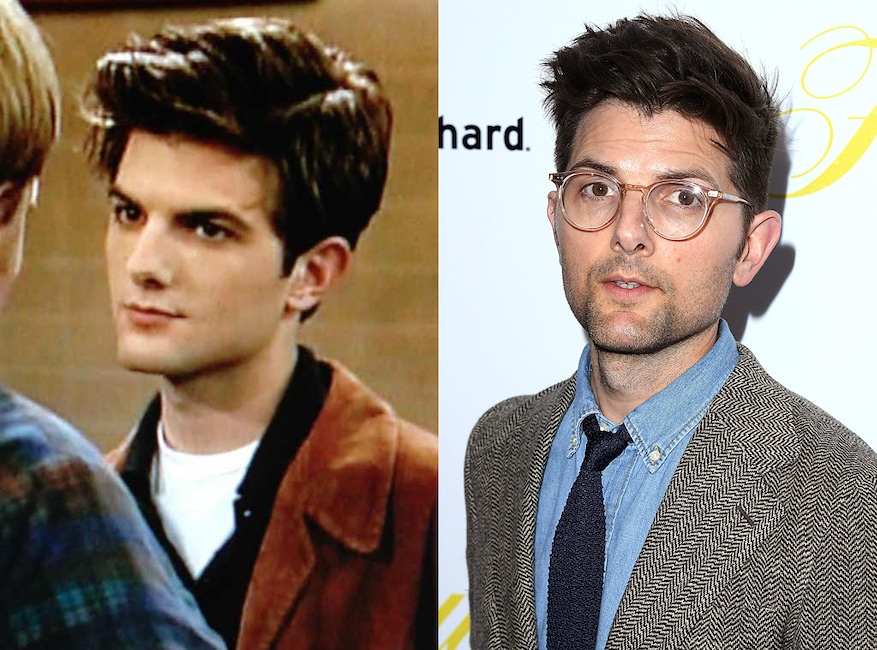 Griff was the second leader of the bullies at John Adams and he was a constant troublemaker for both Cory and Eric throughout his short but memorable time on the series.

Since leaving his days of bullying in the past, Adam Scott went on to become wildly successful on both the small and big screen. Scott starred in a number of hit comedies, including Step Brothers, Our Idiot Brother, Bachelorette, and Friends With Kids. After making us fall in love with him as Henry Pollard on Party Down, Scott now stars as Pawnee’s leading man, Ben, on NBC’s Parks and Recreation. In recent years, he has appeared on shows such as The Good Place and Big Little Lies, and is set to appear in the new Twilight Zone reboot series.

Scott has been married to Naomi Sablan since 2005. They share two children. 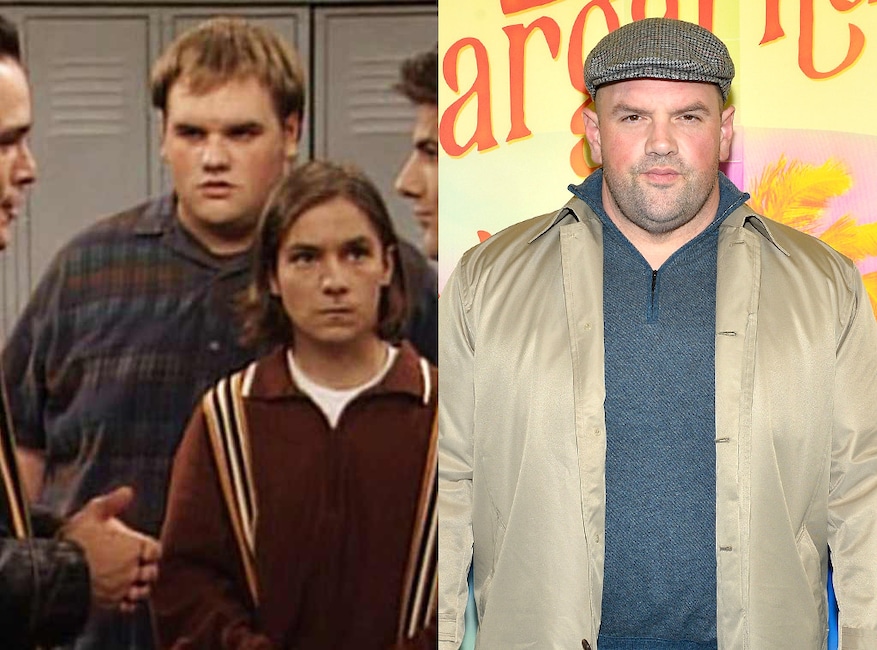 Frankie was the muscle of John Adam Middles School and he often did the bidding of whatever bully took charge of the halls. However, over the years he grew to have a soft spot for Shawn and Cory. Although he wasn’t the smartest student in school, Frankie’s passion for poetry came as a sweet surprise.

Ethan Suplee has found great success in both TV and movies since his bullying days on BMW. Some of his most notable works include American History X, Remember the Titans, Unstoppable, and playing Randy Hickey on all four seasons of My Name Is Earl. Suplee also appeared in Wolf of Wall Street alongside some guy named Leonardo DiCaprio. In recent years he has played Billy on Netflix’s The Ranch.

Suplee has been married to Brandy Lewis, sister of actress and singer Juliette Lewis, since 2006. 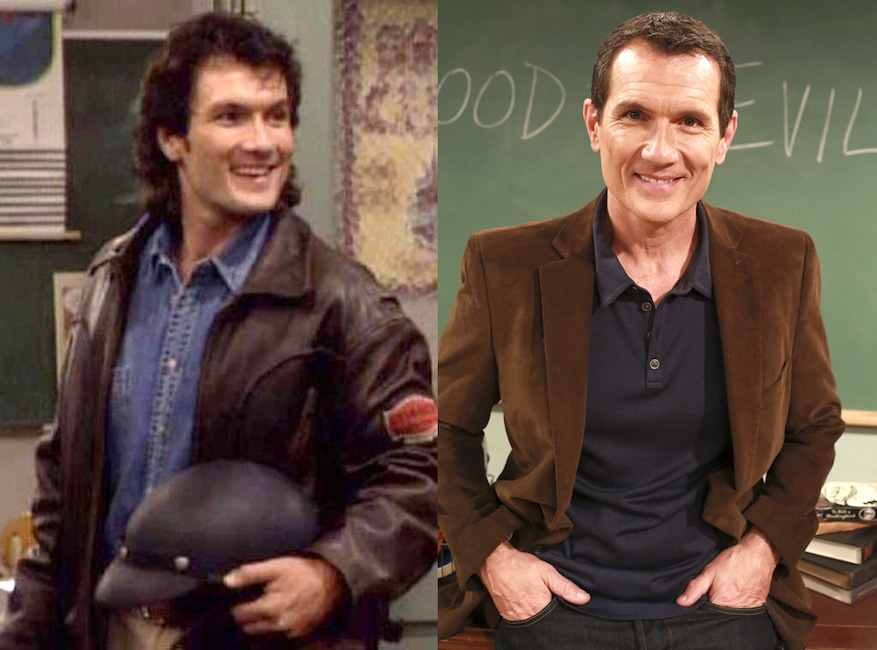 OK, before we launch into there whereabouts of actor Anthony Tyler Quinn, we need to get this off out chest: where the heck did Mr. Turner go?! This leather jacket-wearing dude was the coolest teacher at John Adams High, and he even acted as Shawn’s legal guardian for a bit. We all were devastated when Jonathan was in a horrible crash on his motorcycle at the end of season four, and to make matters worse, we never found out if he was okay—he just disappeared!

Since his tragic final episode on BMW, Quinn has appeared on a number of different shows across the small screen universe. He joined the drama at Melrose Place for a four-year stint, randomly appeared in Rosewood on Pretty Little Liars in 2012, and recently appeared on Feud. He also reprised his BMW role on a few episodes of Girl Meets World. 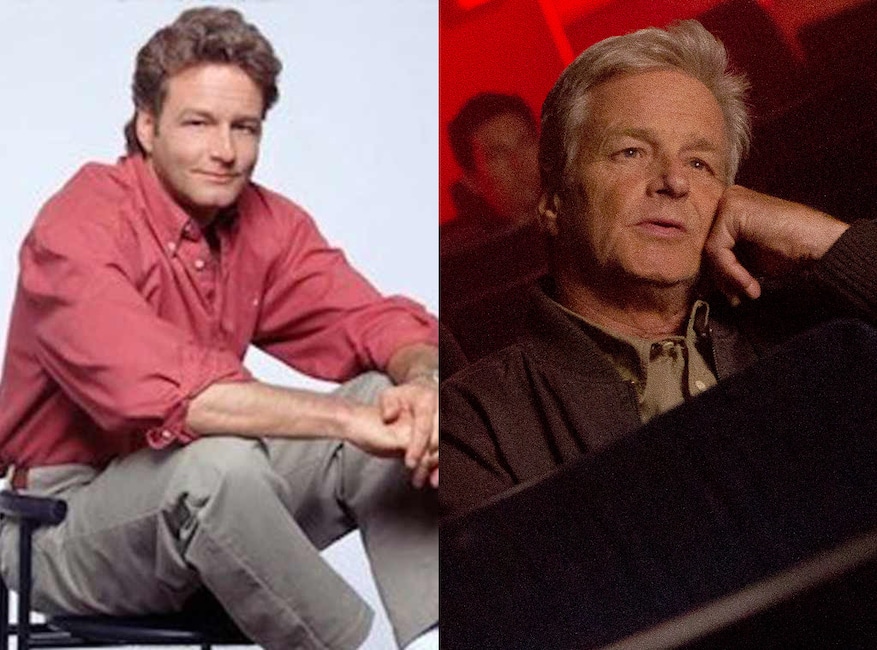 In recent years, he has appeared on shows such as Colony and Bosch and also reprised his role on a couple of episodes of Girl Meets World. The actor has been married to Clare Wren and they share a son and daughter.