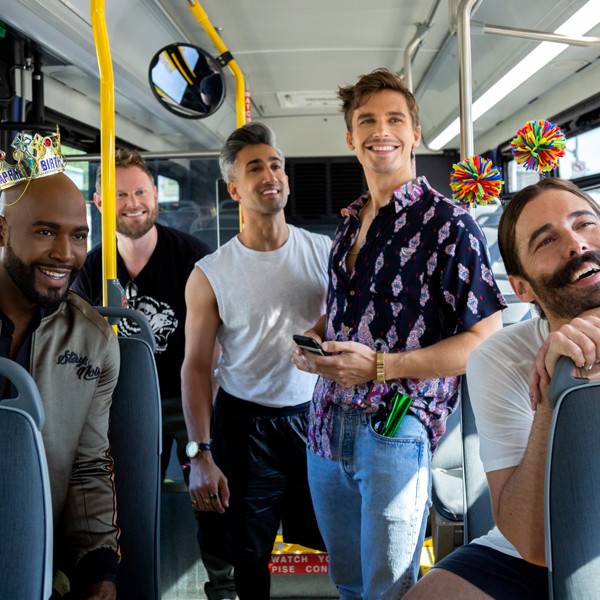 All things just keep getting better.

At least, that’s been the case for Antoni Porowski, Tan France, Karamo Brown, Bobby Berk and Jonathan Van Ness—aka your new Fab Five—ever since Netflix revived the groundbreaking reality series Queer Eye (or as it was known during its initial incarnation on Bravo, Queer Eye for the Straight Guy) in February 2018 and brought them into our lives. And while it’s truly hard to believe that it’s only been one brief year since we met them, there’s no denying that life for our favorite queer quintet has changed immeasurably in that time.

When the Fab Five first graced our screens, each was a relative unknown. Chances are, unless you were a fan of MTV’s The Real World or a Game of Thrones recap web series produced by Funny or Die, you’d never seen a single one of them, let alone heard their name. (Brown joined the cable network’s groundbreaking reality series for its 2004 season set in Philadelphia, becoming the first out gay black man on reality TV, while Van Ness had been spouting one-liners on the Emmy-nominated Gay of Thrones since 2013.)

While Brown and Van Ness were developing careers in media, their three other compatriots were total unknowns in the world of entertainment, with Berk successfully running his own design firm, Bobby Berk Interiors + Design, since 2006 after climbing the ranks in retail before serving as Creative Director at Portico Home + Spa, France busy running his successful modesty clothing line, Kingdom & State, since 2011, and Porowski trying to make it work as an actor (with small roles on The Blacklist and Blue Mountain State) before meeting original Queer Eye star Ted Allen at a book signing and becoming his personal assistant, allowing himself to be mentored by the man whose former role he’d soon come to fill.

And owing to their lack of star power at the moment they were thrust together in a bit of kismet at the large group audition held in a Glendale hotel, the contracts offered to the Fab Five after they made it through casting were, in the grand scheme of things, relatively scant. According to an October 2018 report in Variety, each guy made only $7,500 per episode. Compare that the the reported $75,000 Netflix shelled out for former SNL star Norm Macdonald to front his own talk show on the streaming service and, well, you see what little worth the future stars could command, untested as they were at that point.

And then the thing debuted and turned the Fab Five into overnight sensations. Suddenly, there was some bargaining power on their side. Though the guys weren’t able to renegotiate until season three (seasons one and two were filmed all at once and only later split into two), they did indeed make sure their compensation was increased. And though no figures have been reported, Brown recently told Insider that he and his co-stars were “happy and satisfied” after their salary renegotiations.

“When you’re coming into any brand new show — especially when it’s a reboot of a reality show — of course, they’re always going to be unsure of how it’s going to perform,” he told the outlet, defending their initially low pay. “But they have been so fair about making sure that we have been happy and supported going into season three — and hopefully we have a lot more [seasons]. So I will say that we all feel like the process has been exactly what it should’ve been.”

And while the Fab Five was already remarkably close from the jump—forming a group text chain with one another even before any of them had been cast, Brown revealed in his new memoir, Karamo—their collective bargaining only helped to tighten their bond. “[Insisting we all get paid the same] didn’t add to our personal relationships because we were all already close as friends, but it added to the trust we have because we know that we’re supporting each other in business, just like we do in life,” Brown told Insider. “And that’s really a comforting feeling.”

As the guys have found themselves in a position to command more as Netflix cuts their checks, they’ve also seen their profiles grow, turning them into true media darlings. Much like the Stranger Things kids before them, you couldn’t tune in to a red carpet following the show’s 2018 premiere and not witness some Hollywood heavyweight freaking out over the opportunity to rub elbows with the Fab Five. Chrissy Teigen became their official cheerleader, Michelle Kwan took aspiring figure skater Van Ness under her wing, and Pete Davidson and Justin Theroux all but joined the squad permanently.

With their profiles blossoming overnight, the Fab Five proved that they’re also pretty savvy businessmen, capitalizing on their newfound fame while the notoriously fickle Hollywood’s interest remains white-hot. In the lead up to season three’s March 15 launch, all but one (Berk) have announced their debut books, with Brown’s Karamo: My Story of Embracing Purpose, Healing, and Hope the first to be released. France’s memoir, Naturally Tan, Porowski’s cookbook, Antoni in the Kitchen, and Van Ness’ memoir, Over the Top, are all due to hit bookshelves sometimes in 2019.

Additionally, they’ve found other ways to parlay their fame into further opportunities, with Porowski opening The Village Den, a fast-casual restaurant in New York City, Van Ness seeing his weekly podcast, Getting Curious with Jonathan Van Ness become a bona fide hit following Queer Eye’s debut, allowing him to interview much higher-profile guests than he’d probably ever imagined, Brown turning to advocacy on capital Hill with the Creative Coalition, Berk keeping busy with his design film, and all of them entering into endorsement deals with various and sundry companies looking to the Fab Five for a boost of their own.

For some, they’ve seen changes in their love lives, too. With France and Berk both in committed marriages, Brown and his partner of eight years, director Ian Jordan, decided to join them when they became engaged in May of last year. As for Porowski, who began his Queer Eye tenure in a long-term relationship with Joey Krietemeyer, he found himself single in October before rebounding with former Flipping Out star Trace Lenhoff in December. Meanwhile, Van Ness has had a bit of heartbreak of his own since becoming a superstar. After meeting rugby player Wilco Froneman at a Fourth of July party, they two began dating and made their public debut just ahead of the 2018 Emmys in September. Sadly, by late December, he would be announcing their split on Instagram, quoting Ariana Grande‘s “thank u, next” in the process.

Aside from the obvious spoils that fame has brought their way, landing the gig of a lifetime has had a deeper, more profound affect on the Fab Five, allowing them to contribute to a conversation surrounding representation and equality in media while also changing the lives of not only the “heroes”—Queer Eye‘s chosen title for the subjects of each episode—they come across during filming, but of those who are watching at home, learning to accept themselves for maybe the first time.

“The show has given me more than I’ll ever know, and not just financially or in terms of fame,” France, the western world’s only out gay Muslim man on TV, told The Guardian in March. “It put me in a position to represent my community in a way that I had never seen. And, I’m not just talking about the gay community, I’m talking about the Asian community.”

For Brown, who recently shared his vision board with the world, he can hardly believe that he’s been able to manifest nearly everything he’d hoped for. “It still blows my mind,” he told E! News’ Zuri Hall recently, noting that he only needs a Grammy win for Best Spoken Word Album, a New York Times’ best-seller, and his own talk show to check off every box. “I’ve had that vision board in, like, seven different places in my house…so to be here and to know that I’ve check off almost everything on that list, I’m blown away.”