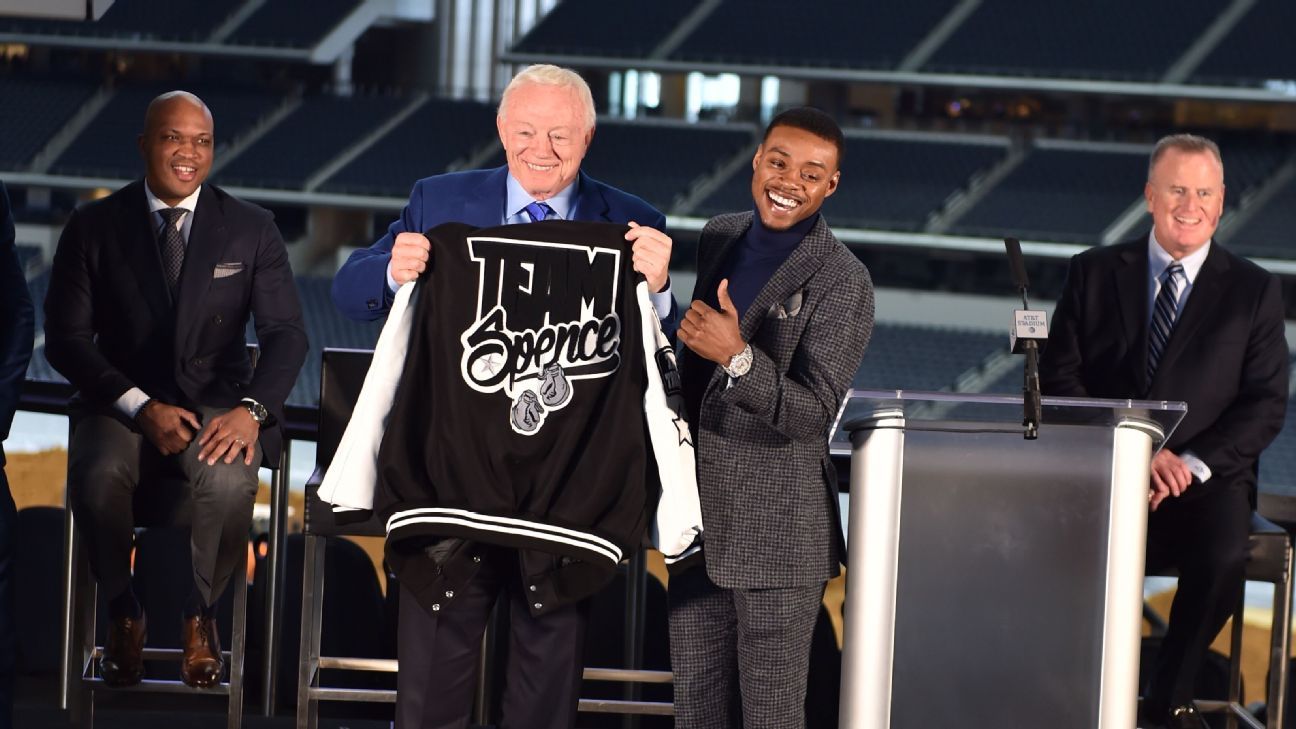 The bright lights of AT&T Stadium will shine as two of the world’s best fighters square off on pay-per-view in a highly-anticipated bout. But take a closer look and you’ll see that, in reality, Saturday’s fight represents a no-win situation for Errol Spence Jr. this weekend against Mikey Garcia in Arlington, Texas.

“Definitely, I’ve thought about it,” Spence told ESPN. “It’s a win-win for him — even if I knock him out in the first round.”

Spence, the defending IBF welterweight champion and a native Texan, faces Garcia on Saturday night at AT&T Stadium — home of the Dallas Cowboys — in his first pay-per-view showcase.

The size gap is the storyline overshadowing everything else, with Garcia going up two weight divisions to challenge Spence. Garcia won his first world title at featherweight (126 pounds) and has never weighed in at more than 139.5 pounds for any of his professional fights. In his two victories at junior welterweight, against Adrien Broner and Sergey Lipinets, Garcia needed to go the distance.

Spence (24-0, 21 KOs) understands that this bout is perceived as being much more like David vs. Goliath than the classic Sugar Ray Leonard vs. Thomas Hearns fight

“They’ll say he’s too small,” Spence said. “If I beat him up throughout the whole fight, they’ll say, ‘He has amazing heart for a little guy. Errol Spence is supposed to do that, he’s the bigger welterweight.’ So even if he looks good [in defeat], they’ll say, ‘The smaller guy looked good, he just couldn’t hold up the weight.'”

So why is Garcia vs. Spence happening? Even though it seems like a flawed matchup in a certain sense, it’s a big fight and an opportunity to compete in front of a massive crowd. It checks a lot of other boxes for each fighter as well, delivering things that both men yearn for at this stage in their respective careers. For Garcia, it’s the challenge he was looking for, while Spence, the southpaw slugger from Desoto, Texas (which is approximately 20 miles from Arlington) gets an opportunity to headline a major event in front of his fans in Jerry Jones’ gleaming billion-dollar venue.

Other boxing fights at the venue include two Manny Pacquiao bouts (both in 2010 in unanimous decision wins against Antonio Margarito and Joshua Clottey) and Canelo Alvarez’s knockout victory over Liam Smith.

“I definitely went to those fights,” Spence said. “It’s just humbling being among those names.”

Last June, Spence demolished Carlos Ocampo in a first-round KO victory at the Star in Frisco, which is the Cowboys’ training facility in front of over 12,000 largely partisan fans.

“It’s crazy, just the whole atmosphere, people don’t know this but boxing is big in Dallas,” Spence said. “There’s a lot of fans there and a lot of people that keep up with boxing.”

If this fight goes as expected, it sets the stage for bigger things in Spence’s future, too.

There are plenty of solid welterweight bouts that Spence could have pursued, but nobody — except for Garcia — was actively clamoring for a fight against Spence.

“Mikey called me out on numerous occasions,” Spence said. “I’m not going to lie, he pushed for the fight.”

With Spence becoming a virtual boogeyman to his fellow PBC (Premier Boxing Champions) colleagues at 147, and no one stepping up to the challenge, Garcia eventually got his wish. It’s undeniably a pairing of two of the elite fighters in the world, but there are weight classes for a reason.

There are a few ways this fight could go. It could be like Pacquiao dominating a bigger Oscar De La Hoya in 2008, or end up like Gennady Golovkin destroying a much smaller Kell Brook in five rounds in 2016.

If this fight follows the conventional wisdom, with the very good big man defeating the very good smaller man, Spence will face some pressure to mix it up with more fighters his own size. For now, while the consensus is that Spence is the world’s best 147-pounder (ranked No. 1 by ESPN), he hasn’t faced the best the welterweight division has to offer.

Outside of stopping Brook for the IBF title in 2017, Spence doesn’t really have many signature victories. It’s also fair to note that other marquee welterweights haven’t exactly been in a rush to fight him, either.

Truth be told, while the welterweight class has been lauded for several years as being among the most talented and deepest in the sport, what you find upon deeper examination is a collection of boxers who are certainly skilled but haven’t fought nearly enough against one another, or at all, in certain cases.

Terence Crawford (34-0, 25), who is rated second in the division by ESPN, is one of the most gifted boxers on the planet, won a world title at lightweight and unified all four major belts as a junior welterweight, but his current welterweight résumé consists of wins over Jeff Horn and Jose Benavidez. The 31-year-old Nebraskan is scheduled to face Amir Khan on April 20 in his own pay-per-view showcase at Madison Square Garden, though, and that’s a step forward.

A Spence-Crawford fight is one of the very best that could be made in the sport of boxing, but the business of it is getting in the way, as each fighter is promoted by rival factions who rarely work with each other.

Pacquiao (61-7-2, 39 KOs), 40, is still good enough to outclass the likes of Broner, as he did in January in a dominating decision victory — and he’ll be ringside Saturday night. That’s a clear indication that the winner on Saturday night — especially if it’s Garcia — will have an inside track on the Pacquiao sweepstakes.

Then there is Keith Thurman (29-0, 22 KO’s), the reigning WBA titleholder, who actually has the best résumé of the current class of welterweights with victories over Shawn Porter and Danny Garcia — wins that made him a WBA and WBC champion in 2017. But then Thurman went dormant, from that point until his return on Jan. 26, when he struggled in a decision victory against Josesito Lopez.

Theoretically, a fight between Spence and Thurman should be the easiest of these division-defining fights to consummate, given that they are both underneath the same promotional banner.

Rounding out the titlists at 147 is WBC champion Shawn Porter (30-2-1, 17 KOs), who was very fortunate to walk away with his belt last weekend after his 12-round struggle against Yordenis Ugas.

This group of boxers (save Pacquiao, who certainly has had a legendary run in the sport) hasn’t exactly conjured up memories of the four horsemen of the ’80s (Leonard, Hearns, Roberto Duran and Marvin Hagler), who carried the sport with legendary battles that stretched over a full decade.

It’s unfair to compare the two generations, as the current crop of welterweights has barely left a mark so far. It’s certainly not a knock on Spence, who has tried his hardest to get his PBC stablemates in the ring.