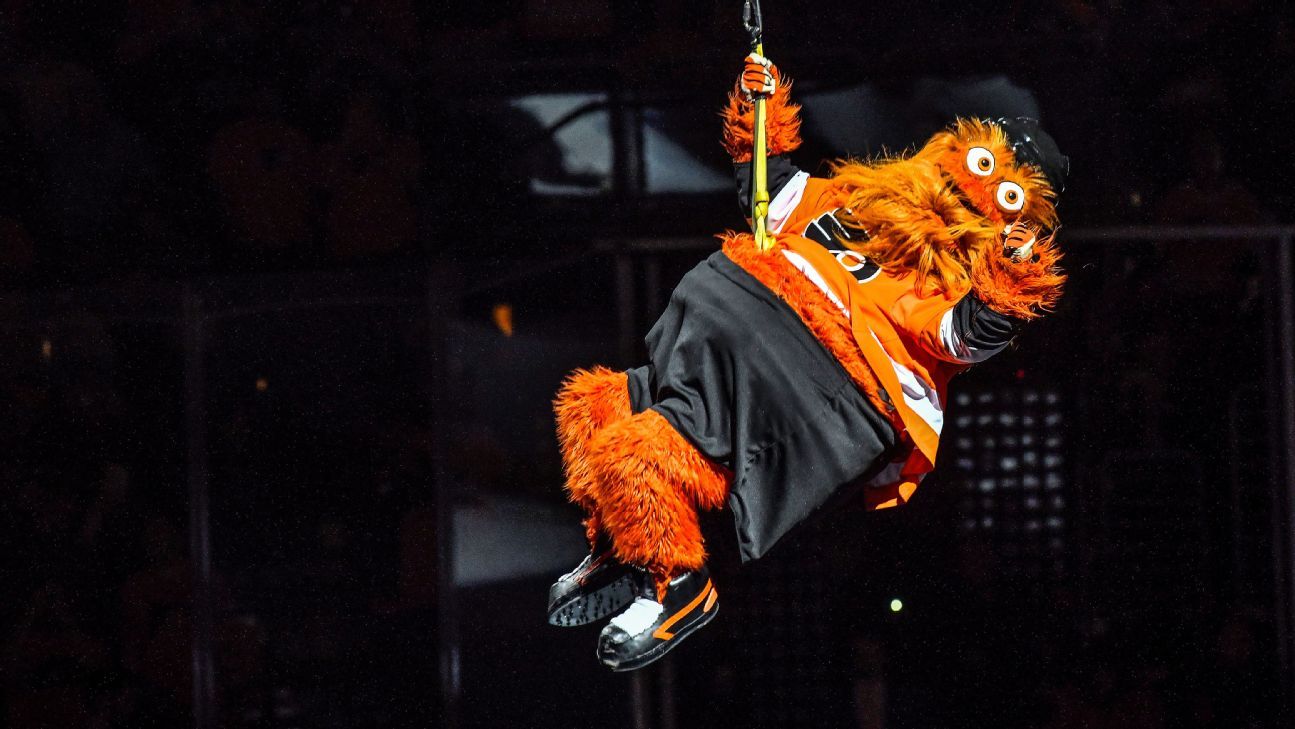 Gritty is now a household name. But the Philadelphia Flyers’ mascot might not have invaded our lives quite as quickly without his memorable — and painful — first skate. As the Flyers get ready to welcome Washington on Thursday night (7 p.m. ET, ESPN+), let’s go back to his epic rink debut on Sept. 24, 2018.

Here’s a two-minute oral history of the night that the new king of Philadelphia was born.

(To see the actual viral moment, scroll to the bottom of this story.)

Brian Allen, Gritty’s designer: The only guidance the Flyers gave us was that they were pretty sure they wanted the mascot to be a monster — somebody you’d want to high-five but not hug.

Christine Mina, digital media manager for the Flyers: That whole first day we were very on-the-fly, creating the plane as we were flying it. Tons of people were getting involved in the conversation — our rival, the Penguins, tweeted “lol ok” at us, and Gritty tweeted, “Sleep with one eye open tonight, bird.” That’s when his first bit of real personality came out.

Lou Nolan, Flyers PA announcer in his 46th season: For the first game, I wasn’t sure where or when he would be coming out. Suddenly there’s what looks like a 7-foot-5 orange character walking out onto the ice. I don’t think fans knew what to do at first.

Gritty, through a mascot interpreter: All I remember is falling on the ice. Ice is super hard. Hit my noggin pretty bad. Don’t remember much after that. I didn’t quite have my ice legs yet. First days are tough — Claude [Giroux, Philly’s team captain and close Gritty confidant] told me so. As for the viral part, I’ve been checked and I’m clean.

Gritty took the internet by storm when he was introduced as the Flyers mascot. But as Katie Nolan points out, other NHL mascots soured on the newcomer.

Nolan: When he fell, I don’t think he was trying to fall. There was laughter, but he immediately came up with the snow angel, and people loved that.

Lauren Capone, Flyers marketing communications coordinator: By later in that game, there were people running out of their seats to get photos.

Mina: He had over 50,000 followers that night, and he reached 100K within three days of us launching.

Capone: He’s like the little kid inside of everybody who wants to push the boundaries. Even when he’s out in public or on the concourse at a game, he has no problem bumping a mom with a stroller aside and taking the stroller for a joyride around the concourse.

Mina: Sometimes he looks so cute and sweet in what he’s doing. In other moments, he’s being such a savage.

Gritty: It all comes down to being a quadruple threat: good looks (360-degree vision provides optimal peripheral vision angles), advanced street magic (not that fake Criss Angel stuff), impeccable BMI (brilliant mascot intuition) and a heart that beats only for the Philadelphia Flyers. They set me free, and now I can’t be tamed.