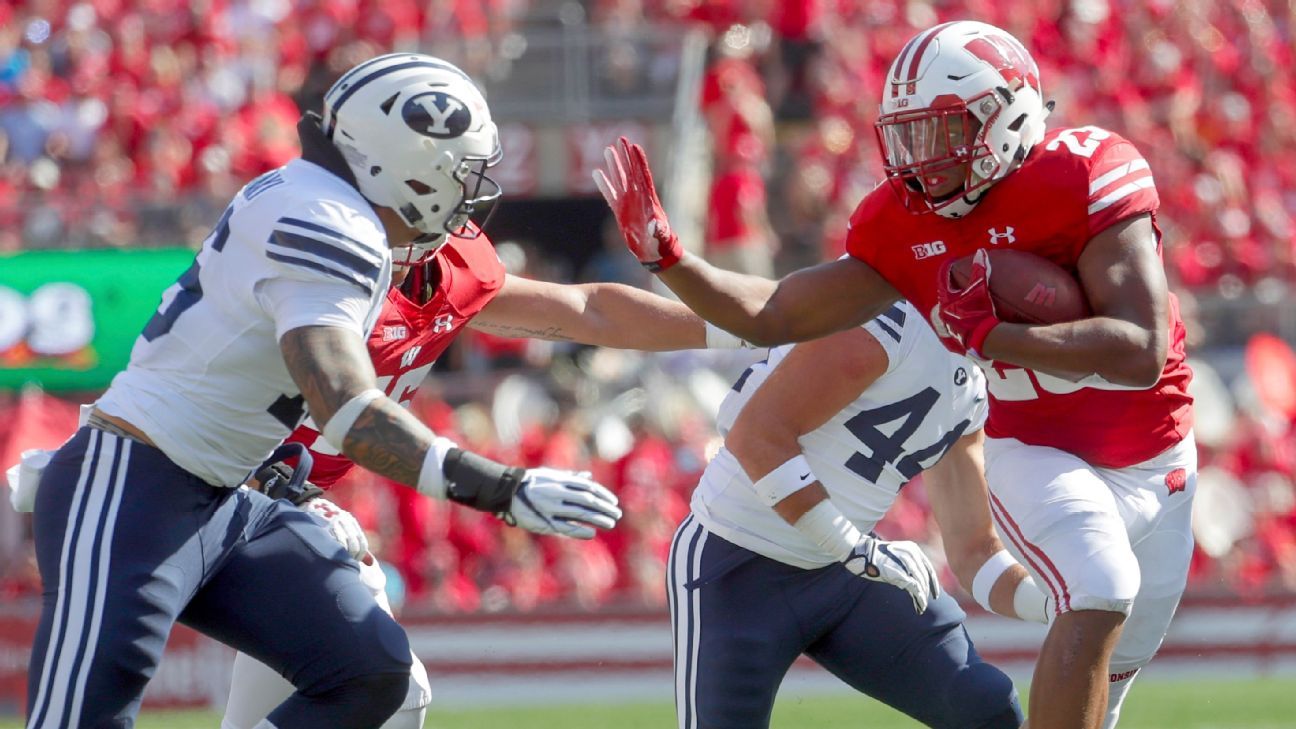 Who are the most dynamic game-breakers on each Top 25 team as we get into the heart of college football spring practice? The players who keep opposing defensive coordinators up at night or the defenders who terrorize quarterbacks with their playmaking abilities?

For some teams, it was hard to choose just one. For others, the pick was obvious.

Take your pick of game-breakers on this offense. Justyn Ross, Tee Higgins, Lyn-J Dixon … the list is a long one. But if we’ve got to hand the top slot to someone, it’s hard to argue against Etienne, who might be the biggest big-play threat in college football. Last season, Etienne had 44 runs of 10 yards or more, 23 of 20 yards or more, 12 of 30 or more and four of at least 50 yards. Etienne has arguably the best first step of any back in the game, and he possesses a combination of physicality and breakaway speed that allows him to turn any run into a home run. — David M. Hale

The Tide’s terrific trio of sophomore receivers — Jerry Jeudy, DeVonta Smith and Henry Ruggs III — garnered most of the attention last season, but don’t sleep on Waddle, who appeared to be shot out of a cannon any time he touched the ball as a true freshman (See: his 51-yard touchdown against Georgia in the SEC championship). The native Texan returned one punt for a touchdown, had 14 receptions of 20-plus yards and averaged 8.04 yards after catch. — Alex Scarborough

Alabama found out just how dynamic Lamb can be in the College Football Playoff, as he hauled in eight catches for 109 yards and a touchdown against the Crimson Tide. With Marquise Brown now gone, Lamb will take over as the No. 1 wideout and is primed to be OU’s latest All-America-caliber pass-catcher. — Jake Trotter

Don’t let Swift’s slow start last season fool you. He’s a home run waiting to happen, whether it’s as a running back or catching passes out of the backfield. When he puts his foot in the ground and takes off, he’s gone. (his touchdown against Kentucky stands out). All told, he averaged 6.4 yards per rush and 9.3 yards per reception. And still there’s the sense with him that the best is yet to come. — Scarborough

Hill will grow into more of a focal point of Ryan Day’s high-powered offense with the Buckeyes losing three of their top four receivers from the 2018 team. With excellent hands and breakaway speed, the senior should have plenty of opportunity to improve on the 70 catches and six touchdowns he had last season. — Dan Murphy

Okwara’s eight sacks as a junior was impressive, and he came within a step or two of adding so much more — finishing the season with 21 QB hurries. A small gain in speed this offseason could lead to a jump in production. He also has the luxury of playing alongside two other high-quality pass-rushers (Daelin Hayes and Khalid Kareem) to keep opposing offensive lines from loading up on his side. — Murphy

While the Longhorns lost Lil’Jordan Humphrey to the NFL, they bring back Johnson, who has shown he can take over games, too. Johnson had 177 receiving yards in the Big 12 championship game against Oklahoma, and ensures that quarterback Sam Ehlinger has a legit game-breaking wideout. — Trotter

The Gators hope to see even more out of the explosive Toney, who had more receptions (25) than rushes (21) a season ago, who returns punts and kickoffs and has been known to throw a pass or two (he had a 20-yard touchdown toss last season). Between all the different ways he lined up, Toney had 12 explosive plays last season but there is potential for so much more. If he becomes a more consistent route runner, Toney could be one of the SEC’s most dynamic players. — Andrea Adelson

Touted for his intelligence as much as his athleticism, Peoples-Jones should be ready to blossom into a versatile playmaker for the Wolverines this fall. He developed a good rapport with returning quarterback Shea Patterson last season and remains a big-play threat on offense and as a punt returner. — Murphy

The Ducks’ most explosive player in 2018, WR Dillon Mitchell, declared for the draft, leaving the team light on proven big-play threats. Both freshman running backs, Verdell (1,018 yards, 10 touchdowns) and Dye (739 yards, four TDs), had strong seasons. Dye averaged slightly more yards per carry (5.3 to 5.0) but Verdall had the longest carry (74 yards to 49). They’ll likely to continue to split carries on an offense that will also welcome five four-star recruits at receiver and running back. — Kyle Bonagura

He’ll have to be more consistent in 2019, but when he’s on, Rogers is that guy for the Aggies. In two of Texas A&M’s biggest games last season — Clemson and LSU — Rogers was exceptional. Against Clemson, he caught seven passes for 120 yards and two scores. In the seven-overtime marathon victory over LSU, he caught two overtime touchdown passes and three two-point conversion receptions, including the winner at the end. Several of those hauls were of the jaw-dropping variety, with Rogers showing off his leaping ability, athleticism and hands. — Sam Khan Jr.

Some of the Tigers’ best players in recent years have worn No. 7. Patrick Peterson. Tyrann Mathieu. Leonard Fournette. The latest player to get that honor is the Tigers’ best playmaker: Delpit. The 2018 All-American and Nagurski Award finalist led the SEC in interceptions (five), was second in passes defended (14), had 9.5 tackles for loss, five sacks … basically, he’s everywhere. He’s fast, he’s instinctive, he’s smart and usually around the ball. Simply, he’s one of the best players in the country. — Khan

The Cougars have a number of talented receivers coming back from their 11-win team, but their most dangerous player with the ball in his hands is running back Borghi. Borghi was a noteworthy signing in 2018 for Wazzu, because the Colorado native spurned Stanford to head to Pullman and provided an impact when he arrived. He finished second on the team in touchdowns (12) behind junior James Williams, who entered the NFL draft. As the feature back without a proven alternative option, he might lead the conference in touchdowns. — Bonagura

You might remember that Killins questioned SEC speed just before UCF beat Auburn in the Chick-Fil-A Peach Bowl, noting that the Knights were UCF fast. Killins would know: He is the most dynamic game-breaker on a roster filled with them across the skill positions. Last season alone, Killins had a team-high 20 plays that went 20 yards or more, including four that went for touchdowns. The running back/receiver/returner had 1,398 all-purpose yards in 2018 and is tied for seventh in program history with 25 touchdowns headed into his senior season. — Adelson

It’s not that Syracuse’s offense doesn’t have some home-run hitters; it’s hard to succeed in Dino Babers’ system without some speed. But for the Orange, the biggest game-breaker might be the guy getting after the QB. Robinson was a monster last season, finishing with 17 tackles for loss, 10 sacks, 11 QB hurries, two pass breakups and three forced fumbles. And of his 353 pass rushes, he got pressure an ACC-best 16.4 percent of the time. Plenty of guys on the up-tempo Orange are big-play threats, but no one can change the dynamic of a game quite like Robinson’s work on D. — Hale

Hamler is quick, fast, elusive and whatever adjective you want to use to describe a playmaker. He’s diminutive in size, but he has already made a big impact on the field in his short time on Penn State’s roster. In 2018, he had a rushing touchdown and five receiving touchdowns to go along with 754 yards receiving, 96 yards on punt returns and 523 on kick returns. He does a little bit of everything, and now with quarterback Trace McSorley, running back Miles Sanders and a handful of receivers no longer on the roster, Hamler is going to be counted on even more in 2019. — Tom VanHaaren

The lack of game-changing plays was the biggest difference between the Huskies in 2018 and the teams of the previous two seasons. It was a sharp decline in that area without receivers Dante Pettis (second-round pick, 2018) and John Ross (No. 9 overall pick, 2017). Ahmed was a bright spot. The sophomore rushed for 608 yards on 5.8 yards per carry — leading rusher Myles Gaskin averaged 4.9 — and has flashed big-play ability since playing as a true freshman. If Amed continues to progress, he should be one of the more productive backs in the Pac-12. — Bonagura

Dixon made an interesting combination with Utah’s leading receiver, Britain Covey, because he provides more of deep threat. As a redshirt freshman in 2018, Dixon ranked second in the Pac-12 in yards per catch (18.4), finishing with 32 receptions for 589 yards. It was an encouraging debut season for Dixon, but the next step will to see him find ways to get into the end zone. Despite the explosiveness he showed, Dixon scored only two touchdowns. — Bonagura

At 6-foot-4, 210 pounds, Skowronek is a big presence on the outside for Northwestern’s offense. With 562 yards last season, he was the second-leading receiver on the team behind Flynn Nagel. Skowronek had three receiving touchdowns and averaged 12.5 yards per reception. With Hunter Johnson presumably taking over at quarterback and Nagel no longer on the roster, Skowronek is going to have to play a big role in the offense and provide a big spark in the playmaking category. — VanHaaren

Maybe it’s premature considering St. Brown caught just eight passes last season, but the noteworthy part is that four of them went for at least 45 yards. In the Pac-12, only Oregon’s Dillon Mitchell had more catches for at least 45 yards (five) and St. Brown had three more such grabs than his younger brother, USC’s Amon-Ra St. Brown, who had 60 receptions total last season. Osiris St. Brown should get more opportunities this season; of the four Cardinal players with more receiving yards in 2018, three have either graduated or departed for the NFL. — Bonagura

Taylor was first among all FBS players in rushing yards last season and has been the workhorse of Wisconsin’s offense since he arrived in Madison in 2017. He ran for 2,194 yards and 16 touchdowns as a sophomore, providing a consistent presence on offense for the Badgers. With starter Alex Hornibrook having announced he is transferring, a new quarterback will be taking over. Taylor will be needed more than ever in 2019 if Wisconsin wants to get back being to a Big Ten championship-caliber team. — VanHaaren

Smith-Marsette gets the nod over running back Mekhi Sargent because of his versatility and ability to affect a few different aspects of the game. In 2018, Smith-Marsette averaged 15.7 yards per reception, with 361 yards and three touchdowns on 23 catches. He had 71 rushing yards on nine attempts and 707 kickoff-return yards. He will be needed again on special teams and to help bring the offense to another level. — VanHaaren

If Williams isn’t a problem for SEC defenses now, he’s going to be very soon. At 6-foot-3 and 210 pounds, he’s a load. And he’s just getting started. Last season as a freshman, he barely scratched the surface and yet he averaged a whopping 20.5 yards per reception, which was the third-highest mark among qualifying receivers in the conference. It stands to reason that the more he learns, the better he’ll be. — Scarborough

No freshman in the country accounted from more yards per game than Martinez (295.1) last season. Coach Scott Frost thinks his young dual-threat star can finish his career as one of the best quarterbacks in Huskers history. His numbers should keep climbing as the entire roster gets more comfortable in an offensive system built for playmakers like Martinez. — Murphy

Hopkins displayed how just dynamic he can be in the Lockheed Martin Armed Forces Bowl, rushing for 170 yards and five touchdowns in a 70-14 demolition of Houston. The junior quarterback — who became the first in the academy’s illustrious history to throw and rush for 1,000 yards in the same season — is back to spearhead an Army option attack that returns mostly intact off a record-breaking 11-win season. — Trotter