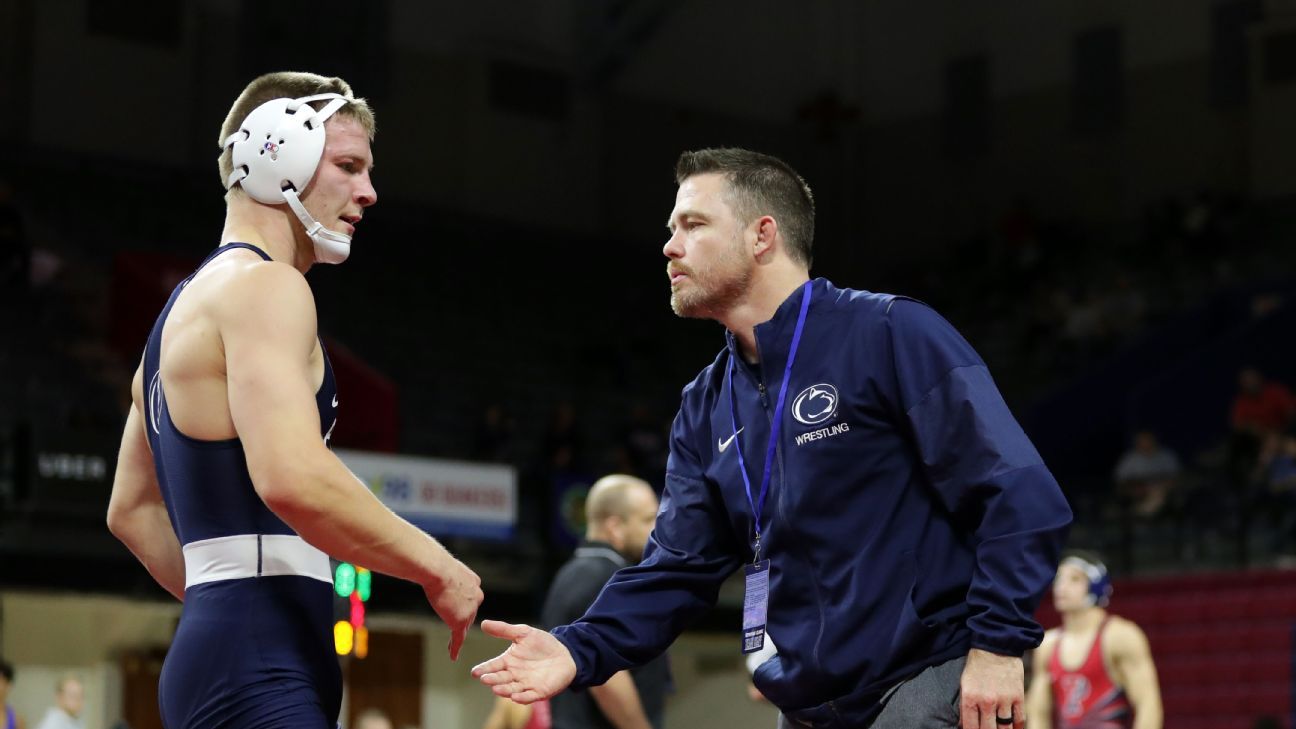 Let’s just skip right past the whole team title thing for the NCAA wrestling championships: Penn State should win by 40.

But who will place second behind the Nittany Lions, winners of seven of the past eight NCAA championships? That’s a more interesting race that could come down to a match or two.

Here’s the schedule, a predicted final for all 10 weight classes and a 1-5 prognostication for the team race.

A rundown of the schedule for the NCAA men’s wrestling championship:

All times are p.m. ET

No. 1 seed Sebastian Rivera of Northwestern squeaks past a game Jack Mueller from Virginia to set up a Big Ten finals rematch with Iowa’s Spencer Lee, the three seed. Lee manages to avenge his stunning regular-season pin loss against Oklahoma State’s Nick Piccininni in the semifinals, then takes care of Rivera for his second straight 125-pound title.

Oh boy, this weight class could be wild. Let’s say No. 1 seed Daton Fix (Oklahoma State) edges Ohio State’s Luke Pletcher, the No. 5 seed, in the semis. On the opposite side, Michigan’s No. 2 seed Stevan Micic survives a brutal half of the bracket, beating Rutgers’ No. 3 seed Nick Suriano to get the final. There, he gets the last takedown and knocks off Fix.

This one feels very chalky. No. 1 seed Yianni Diakomihalis of Cornell takes out No. 5 seed Jaydin Eirman of Missouri in the semis, then runs into Ohio State’s No. 2 seed Joey McKenna (a semifinal winner over Penn State’s Nick Lee in a high-scoring thriller). McKenna and Yianni put on one of the wildest finals matches of the night … and Yianni ekes out a second straight NCAA title.

No. 1 seed Anthony Ashnault manages to again defeat Princeton’s No. 5 seed Matthew Kolodzik in the semis (but it’s a much closer bout than their regular-season showdown). On the other side of the bracket, Ohio State’s No. 2 seed Micah Jordan cruises through, downing No. 3 seed Mitch Finesilver of Duke. But Ashnault is too much for Jordan, even hitting a late tilt to cinch up the win.

Uh, well, Penn State’s No. 1 seed Jason Nolf is going to win, and he may win by bonus points for the entire tournament. Let’s say he major decisions NC State’s No. 5 seed Hayden Hidlay in the semifinals, then again clobbers Nebraska’s Tyler Berger (the No. 2 seed, who beats Northwestern’s Ryan Deakin in the semifinals) for his third NCAA title. Nolf leaves as a four-time All-American and one of the very best wrestlers to ever put on an NCAA singlet.

This ought to be fun. Iowa’s top-seeded Alex Marinelli outlasts a game Chance Marsteller from Lock Haven, the five seed, to face off with Penn State’s Vincenzo Joseph in the final. Joseph, the two-time defending 165-pound champ, scraps past always-tough Logan Massa from Michigan, the six seed, to get another crack at Marinelli, who beat Joseph for the Big Ten title. In a tossup final, Joseph gets it done to complete a very unorthodox first three years of college wrestling: three national titles … without ever winning his own conference title.

Hard to imagine anything but Penn State’s Mark Hall, the No. 1 seed, making it out of the top half of the bracket. Best bet is, he again inches past Michigan’s No. 4 seed Myles Amine by one point in the semifinals. On the opposite side, Arizona State’s No. 3 seed Zahid Valencia, last year’s national champ, avenges an earlier regular-season loss to Missouri’s Daniel Lewis in the semifinals. That sets up a repeat of last year’s 174-pound title match, won by Valencia. If Hall and Valencia wrestle 100 times, they probably split 50-50, or Valencia wins a few more than he loses. But in this one, Hall musters just over a minute of riding time to win by one point.

Ohio State’s top-seeded Myles Martin could be the heaviest favorite in the entire tournament to get to the finals — we’ll say he major decisions Emery Parker of Illinois (the fourth seed) to get there. On the other side, Penn State’s unbeaten No. 2 seed, Shakur Rasheed, barely beats NC State’s No. 7 seed Nick Reenan in the quarterfinals, then needs a late takedown to get past No. 3 seed Zachary Zavatsky of Virginia Tech in the semis. The finals bout is Martin-Rasheed, which was supposed to happen at Big Tens before Rasheed took a medical forfeit in the championship bout. Rasheed has the Penn State crowd thinking upset during a wild first period, but Martin ultimately turns it on from neutral and wears down Rasheed late for the NCAA title.

Another romp for a Penn State wrestler. Unbeaten Bo Nickal, the Nittany Lions’ No. 1 seed, should score bonus points for all five of his matches, including a semifinal pin over Princeton’s Patrick Brucki. His opponent in the final: Ohio State’s Kollin Moore, who survives a scare from surprise semifinalist Willie Miklus of Iowa State, the six seed. In the final, Nickal blows open a tight match and wins by major decision over Moore. He leaves Penn State with a Nolf-like, legacy-including three national titles.

This weight class may have the tournament’s most unfortunate semifinal bout, though the seeding is logical. On the lower half, Minnesota’s No. 3 seed Gable Steveson and Penn State’s No. 2 seed Anthony Cassar should romp to a semifinal rematch of last week’s Big Ten final (won by Cassar). Most observers will consider that the true matchup of the two best heavyweights, but No. 1 seed Derek White of Oklahoma State beat Cassar earlier this season, so it’s hard to argue with the Cowboy getting the top spot. White dispatches No. 5 seed Mason Parris of Michigan to get to the final, where he loses to whoever wins Steveson-Cassar II. Steveson, a freshman phenom, battles past Cassar before downing White for the first of four NCAA titles the Gopher will ultimately win.

Penn State should win by north of 40 team points, though the NCAA record of 170 is probably 20 points out of reach. It would take a Nick Lee run to the 141-pound finals, plus some major consolation bracket damage from Roman Bravo-Young (133 pounds) and Brady Berge (149 pounds), to threaten Oklahoma State’s all-time record.