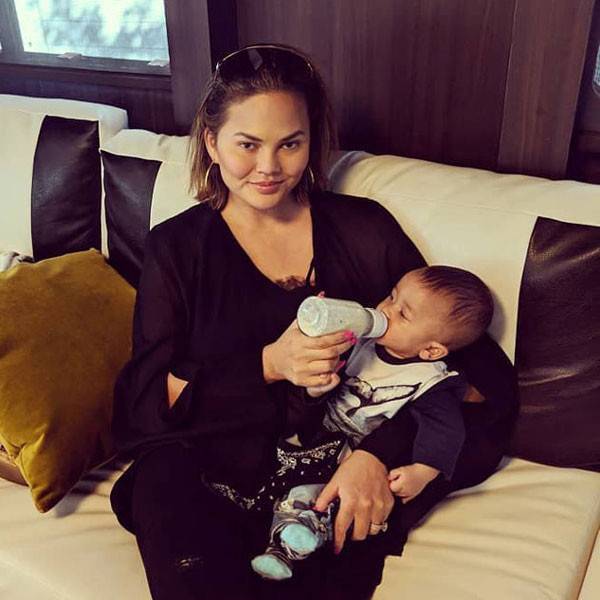 Someone please cue up “Pomp and Circumstance” because we have a graduate on our hands.

Chrissy Teigen announced on Twitter that her and John Legend‘s son Miles Stephens is now officially helmet-free. The Cravings cookbook author shared on social media on Dec. 3 that Miles was “getting fitted for a little helmet today for his adorable slightly misshapen head.” She assured her followers not to “feel bad” for her son because “he’s just fixing his flat and honestly he’s probably gonna be even cuter with it somehow.” She was right about that!

Wednesday was a momentous occasion for the sweet 9-month-old boy. Teigen celebrated her son and praised him for being “such a trooper for 3 months of helmet.” This marks his official helmet “graduation.”

The 33-year-old shared a video of them snuggling on the couch and wished him a “happy helmet free day.”

Well, no more helmet for now until it’s time to learn how to ride a bike. But one protective step at a time.

Teigen received an outpouring of support and praise when she initially shared on Twitter that Miles had to start wearing a helmet. Many of her followers shared pictures and anecdotes of their own experiences with themselves or their children wearing helmets.

“Chrissy, really cool of you to share. All of us parents have these moments with our kids and it just makes it easier to talk about them when you see you are not alone,” one Twitter user replied.

such a trooper for 3 months of helmet. happy graduation, Miles!! pic.twitter.com/atOIplfHLg

Teigen has posted her fair share of videos of Miles repping his well-decorated helmet while he plays with his dog or his toys.

Helmet or not, one look from Miles on camera is enough to make anyone’s heart melt into a million pieces. On Jan. 12, Miles needed some fashion advice while getting ready for his dad aka twin-with-a-40-year-age-difference’s James Bond-themed birthday party.

Teigen posted side-by-side photos of Miles wearing a black tuxedo and a white tuxedo and turned to her trusted 11 million Twitter followers to help her decide. The verdict didn’t even matter because it was clear that Miles would be the star of the show no matter what.

It’s safe to assume that Teigen is celebrating Miles’ big achievement with some delicious food. There’s one snack in particular, however, that probably won’t be on the menu.

On Feb. 23, the Lip Sync Battle host celebrated her son’s 9-month birthday by sharing a fun update about some of his main likes and dislikes. For instance, Miles loves his sister Luna Stephens and toys with music noises. However, don’t think about giving him any quinoa. He’ll take a bath over that trendy grain anytime.

Congrats on the big day, Miles!