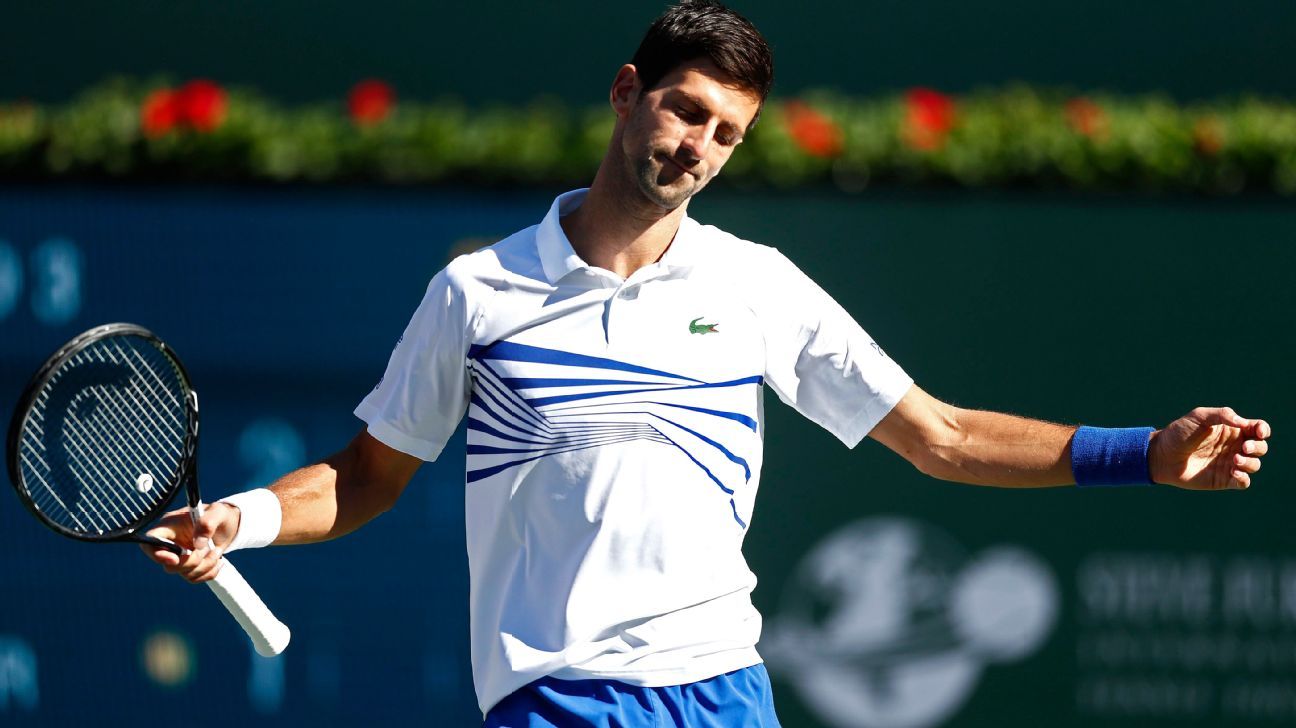 INDIAN WELLS, Calif. — At approximately 3 p.m. Tuesday at the BNP Paribas Open, world No. 1 Novak Djokovic stood in the Stadium 1 players tunnel, stretching and focusing and preparing to play a third-round match against Philipp Kohlschreiber that was originally scheduled to take place 18 hours earlier. As Djokovic waited, world No. 2 Rafael Nadal swatted underhanded serves to send autographed balls high into the Stadium 1 upper deck and into the outstretched arms of fans who’d watched him defeat Diego Schwartzman 6-3, 6-1 and earn a spot in the fourth round.

At the same time across the grounds on Stadium 2, Czech teenager Marketa Vondrousova gave an on-court interview after upsetting No. 2 Simona Halep in the fourth round. It was Vondrousova’s first career win over a top-10 opponent and the biggest upset of the tournament at the time. (Spoiler alert: In a few hours, it would be far from the most shocking news of the day.)

And Tuesday was just warming up.

Thanks to a dearth of top-seed upsets in the first week — and the rain Monday night — fans were treated to a Tuesday of tennis that would rival the opening round of any Grand Slam and test the merits of their running shoes. On the docket: The Big Three (Nadal, Djokovic, Roger Federer), the top-ranked man (Djokovic) and woman (Naomi Osaka) in the game, the top-ranked American man (John Isner) and one of the all-time greats (Venus Williams). Yet none of them played each other, another factor that made Tuesday feel so unique this late into the draw.

There were so many incredible matchups featuring boldface names that some of the best players in the world — Halep and Osaka, to name two — were relegated to outer stadiums. In fact, two hours after his 6-4, 6-4 loss to Kohlschreiber marked his earliest defeat since last May in Madrid, Djokovic walked out onto Stadium 3 and played doubles with Fabio Fognini, an Italian Grand Slam doubles champion — and won.

“I feel responsible, regardless of the result in singles, if I’m part of the doubles, to play,” Djokovic said in his post-doubleheader news conference. “It’s not easy mentally to refresh your mindset and concentration and get the right intensity on the court [for doubles] so quickly after a disappointing loss in singles. But it’s been a lot of fun playing doubles with Fognini this week. The crowd is fantastic.”

It’s no secret California is in the midst of record-setting rainfall. And while most residents of sunny SoCal have been hiding inside wishing for bluer skies, there’s a beautiful byproduct (in addition to much, much-needed water) drawing people to the desert: a super bloom of wildflowers blanketing the desert floor. Monday night’s rain, which suspended play and pushed Djokovic’s match to Tuesday, created a super bloom of its own.

And the lineup was only half the story.

By the close of play Tuesday, seven ranked players between the men’s and women’s draws would be upset by unseeded or lower-seeded players and the two No. 1 seeds would be out of the tournament.

Unseeded 22-year-old Hubert Hurkacz of Poland started the day on Stadium 2 by knocking off No. 6 Kei Nishikori, followed by Vondrousova dropping Halep from the draw. Meanwhile on Stadium 4, 18-year-old Canadian Bianca Andreescu upset No. 18 Qiang Wang of China. Back on Stadium 1, Kohlschreiber — who was 0-11 against players ranked No. 1 in the world before Tuesday — stunned Djokovic. Then on Stadium 2, No. 23 Belinda Bencic, who is in the midst of a 12-match win streak, ended Osaka’s hopes for a repeat win at Indian Wells.

“I think I did well. I didn’t lose in the first round,” Osaka said after her fourth-round loss. “That’s a plus.”

The second Monday at Wimbledon is referred to as Manic Monday, but it earned that moniker because of its sheer number of matches — after an off day on Sunday, every player remaining in both draws is in action — not because of the muscle of those matches. Tuesday in the California desert, six of the top 10 men and seven of the top 10 women played. By 11 p.m. local time, only four top-10 men and three top-10 women remained in the draw.

It was an embarrassment of riches for fans who took a gamble on Tuesday’s ticket. And it wasn’t all losses: a handful of favorites rolled. Nadal and Federer, neither of whom has dropped a set so far this tournament, are on a collision course to the men’s semifinals, while Williams, No. 8 Angelique Kerber, No. 5 Karolina Pliskova and No. 6 Elina Svitolina all remain in the women’s final eight.

“I was pretty determined this year,” Williams said after beating unseeded German player Mona Barthel in straight sets to set up a quarterfinal match with Kerber. “I haven’t played that much, so I wanted to make it count. It’s not going to get any easier from here, so I just have to continue to raise my game.”

Williams has no easy road to the final, where she could face No. 20 Garbine Muguruza, who opened the day on Stadium 1 with a win over No. 7 Kiki Bertens. To reach Sunday, Williams must first play through Kerber and either Pliskova or Bencic.

If Williams does reach the finals (or if Vondrousova or Andreescu, who has yet to win a WTA title, pull an Osaka, circa 2018), fans will have a story to share about a Super Tuesday in March when they watched the eventual winner’s championship run take shape — in addition to catching a whole lot of remarkable tennis.