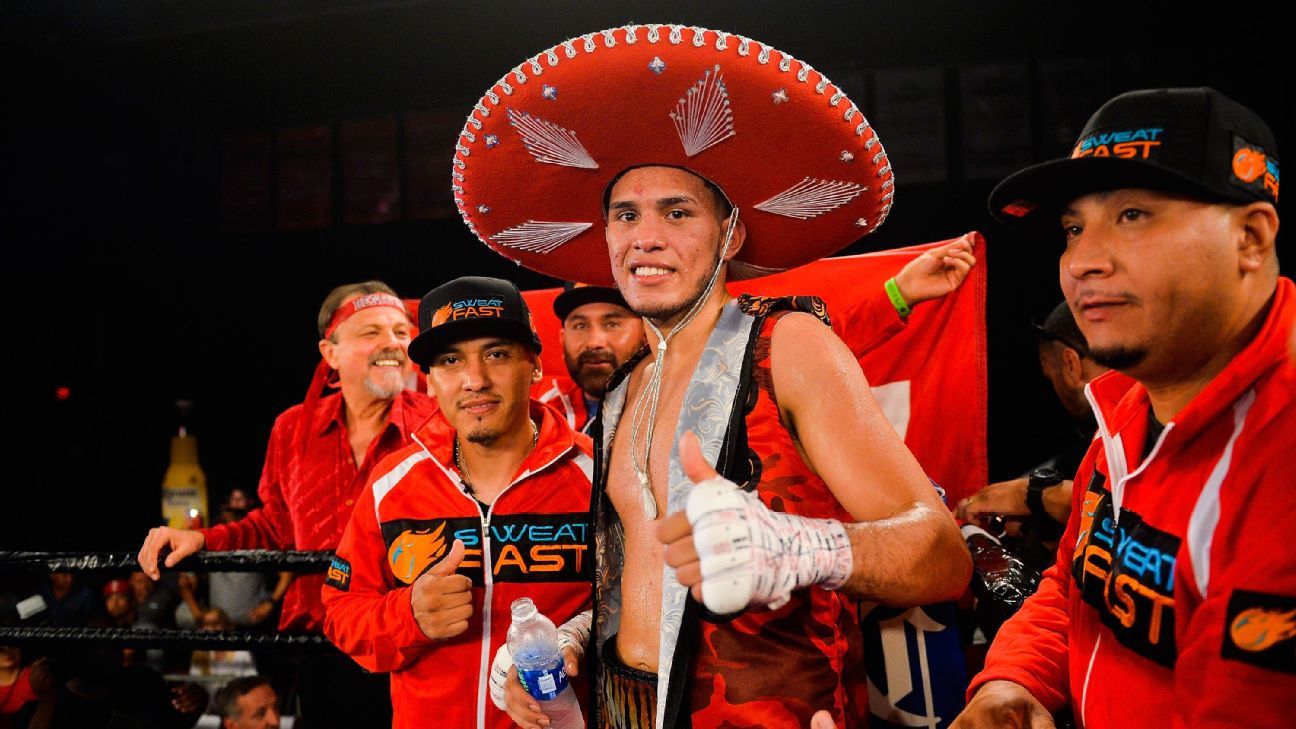 For David Benavidez, 2018 was a year he’d rather forget. From being one of the youngest world champions in all of boxing, he was then stripped of his WBC super middleweight title in September after testing positive for cocaine.

For Benavidez, 22, it was as embarrassing as it was disgraceful, as he was suspended for six months by the WBC. Along with this, there was also his short-lived dalliance with Top Rank, with whom he signed a promotional contract, and then quickly reversed course to go back to Sampson Boxing and the Premier Boxing Champions.

“Last year was a rough year for me and my team. We took a lot of steps backwards,” admitted Benavidez, who only fought once in 2018.

What should have been a springboard to bigger and better things, instead became a referendum on his commitment to the sport.

“We’re learning from our mistakes, we’re going to leave the past in the past,” Benavidez said. “Now, I’m just ready and excited, all the opportunities in front of me and I’m going to take advantage of every one of them.”

David, who was always thought to be the more settled of the Benavidez brothers (Jose, a welterweight was shot under mysterious circumstances in 2016), insists that while he admittedly used cocaine, it was a one-time occurrence.

For the time being, he wears the scarlet letter, but using recreational drugs doesn’t carry the same stigma as being busted for performance enhancing drugs. But it’s a stigma nonetheless, and he might never be able to shake that label completely.

“I mean, as long as I do my job, I really don’t care if anybody doesn’t forgive me, or forgets about it. It’s something I did, it’s always going to be there. I’m always going to be talked about as that person,” said Benavidez, who understands that making up alibis in this particular instance would do him more harm that good.

“I did come out positive for that drug test, like I said: We live and we learn. We’re going to leave it in the past where it belongs, we’re going to keep training. If it doesn’t kill us, it makes us stronger,” promised Benavidez, who certainly has more than enough time to change the perception some might have off him.

The bottom line is that fans are very forgiving of athletes who perform well.

“I love boxing so much, seeing everyone have their glory, I know I could’ve been right there, it just made me more upset the fact that I was that stupid just to make some kind of mistake like that. It really did get at me, like I said — I’m not going to make those kind of mistakes anymore.”

You get the sense that Benavidez (20-0, 17 KOs) isn’t too concerned over his current reputation with the general public. They are outsiders. What they think about him only means so much. But facing his father/trainer, Jose Sr. as the news broke of his positive drug test?

“It was a big disappointment, I’m mean, you always take them away from those bad influences, and we were doing so good and on top of his game, I was just so confused,” said the elder Benavidez, the pain still evident in his voice, months later. “It was unbelievable, I was heartbroken. Words can’t even explain that.”

For parents in this situation, you’re either angry or disappointed by your children’s indiscretions. With Benavidez it was both.

“I was very disappointed, at the same time I was very angry — and I was very confused and I thought it was the end of the world,” Jose Sr. said.

While he is the father, Jose Sr. really looks like the older brother of his two sons, and for years this trio has been bound by the sport of boxing. Jose Sr. said he actually contemplated leaving this business, which in all honesty wasn’t a realistic option, but the family did pack their things up and move from Arizona to Seattle.

Son and father have long mended any ill feelings from last year.

“Thank God we’re closer than ever,” Jose Sr. said. “We have more communication, and he’s really motivated. Y’know, I’m not going to say, ‘thank God that it happened,’ it did happen early and he understood what he lost. Like I said, now he’s more motivated, more hungry, and it’s a big difference now in his motivation level, like two, three times more.”

During his suspension, Benavidez said he spent plenty of time with his three dogs and went to the gym as consistently as possible. The stark reality is that with or without him, the game moved on.

“I love boxing so much, seeing everyone have their glory, I know I could’ve been right there, it just made me more upset the fact that I was that stupid just to make some kind of mistake like that,” Benavidez said, ruefully. “It really did get at me, like I said — I’m not going to make those kind of mistakes anymore.”

During Benavidez’s forced hiatus from the ring, a lot has happened at 168. Callum Smith (25-0, 18 KOs) captured the WBA title, and he won the prestigious World Boxing Super Series by stopping George Groves in seven rounds in late September. In January, Caleb Plant (18-0, 10 KOs) defeated Jose Uzcategui for the IBF crown, while Gilberto “Zurdo” Ramirez (39-0, 25 KOs) after three successful title defenses of his WBO belt in 2018, has decided to vacate that title and move up to light heavyweight.

“It motivated me a lot seeing all these guys coming up,” said Benavidez, who last fought in February 2018 when he decisively beat Ronald Gavril in their rematch. “There’s a lot of great fights that can be made. I’m back stronger than ever, I’m more motivated than ever just to prove to the people and everybody that I let down.

“I’m excited to come back and to show people I really am the best at 168.”

Currently, Benavidez is the WBC champion in recess meaning that while he was stripped of his title by the organization, he is still in line to fight for the belt should he defeat Love in Texas. On Feb. 23, Anthony Dirrell won that belt by defeating Avni Yildirim in a ten-round technical decision.

“It was a good fight, both guys kind of going toe-to-toe, I expected Anthony Dirrell to pick him apart more than he did,” Benavidez told ESPN after the fight. “I actually thought he was going to get a knockout, but both guys showed a lot in that fight, and I think they made the right decision.”

So now Benavidez is just one step away from having an opportunity to win back a title he never lost in the ring. It’s also a chance to reintroduce himself to the boxing world on a large stage. It’s a tune-up fight, but at the same time, a big one.

“We treated this as if it was a world title fight,” stated Benavidez, who during his time in Southern California for this training camp, sparred regularly with the likes of WBA light heavyweight belt holder, Dmitry Bivol, knowing just how important this outing is.

“We went hard for this fight.”