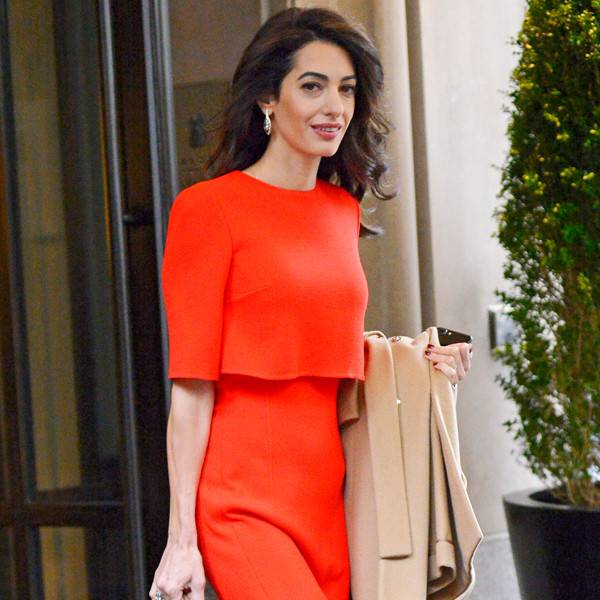 The darling couple attends Prince Charles‘ star-studded dinner at Buckingham Palace on March 12. Celebrating the work of the Prince’s Trust Group, the 41-year-old barrister steals the spotlight at the extravagant event in her dazzling ensemble.

Amal stuns in a fit and flare gown, which features a dramatic asymmetrical cape. And if you look closely, you’ll notice her left arm is adorned with intricate gold beading. She pairs her dress with a metallic gold clutch and beautifully demure diamond earrings.

She is truly a vision in white and her effortlessly elegant design is fit for royalty. If anything, she’s wearing her most glam ensemble to date.

The human rights lawyer keeps her makeup and hair classic, because, honestly, all eyes are on her gown. She opts for a statement-making red lip, bold brows and a slight smoky eye while her voluminous waves and deep side part exude old Hollywood glamour.

As for George? He wears the standard black and white tux, leaving the focus on his wife’s jaw-dropping outfit.

Aside from the couple’s ravishing attire, George and Amal aren’t the only famous faces at Prince Charles’ dinner for his youth charity.

At the dinner, the Clooney’s share a special moment with the Prince of Wales at the star-studded event.

However, fans of the famous couple know they aren’t strangers to the royal family. Both Amal and George attended Prince Harry and Meghan Markle‘s royal wedding, whom they’re both close friends with.

Since Amal has ties to the royal family already, there’s no harm in saying she looks like a princess at the Buckingham Palace!