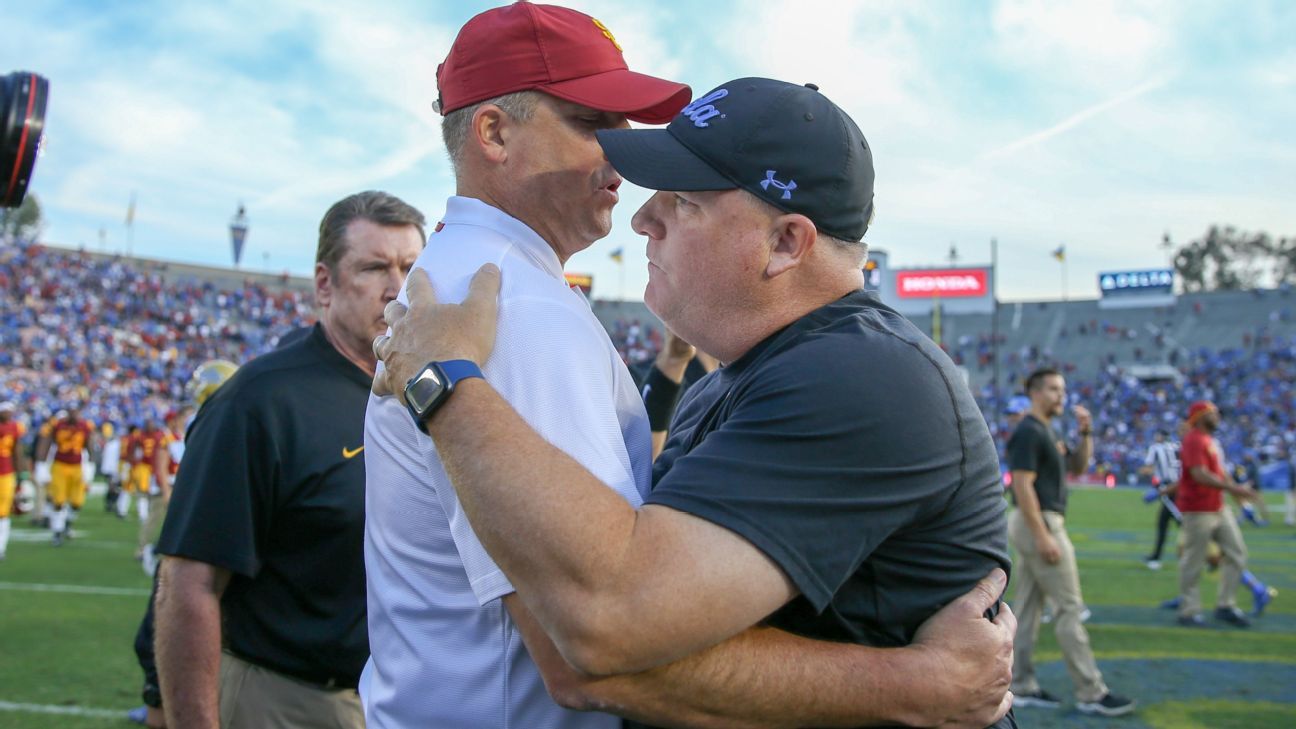 LOS ANGELES — On a cool March morning in Westwood, Chip Kelly stands at the middle of one of UCLA’s practice fields twirling his whistle and talking to an assistant. The players stretch, a bounce in their step as they laugh and joke, moving up and down the turf.

Soon, players dive into the day’s session, nearly sprinting in between practice stations, almost matching the fierce tempo of any good Kelly offense … and it’s only Day 2 of spring practice for the Bruins.

A little more than three months removed from a disappointing 3-9 mark in Kelly’s first year, the Bruins have shaken off 2018 and are trying to start anew with improved energy and focus.

“Every year is a new season,” Kelly said. “I don’t think there’s a lot of reflection that goes back on the last year. They were all excited about what the future [is].”

“Their attitude’s been great, but their attitude was great last year. We’ve got a bunch of hungry kids that are fun to coach.”

Across town, the mood’s a bit different. There’s a sense of unease and uncertainty for USC after an ugly 5-7 season. Clay Helton enters his fourth spring as the Trojans’ head coach very much on the hot seat and with waning fan support.

USC just suffered its first losing season since 2000 and lost to UCLA for the first time since 2014. Within a month, lauded offensive coordinator hire Kliff Kingsbury — off to the Arizona Cardinals — and prized freshman signee Bru McCoy — transferred to Texas — were gone.

Helton has replaced nearly his entire coaching staff and has taken a CEO approach to better see all aspects of his team, while delegating to his assistants more.

However, he’s asked defensive coordinator Clancy Pendergast and new OC Graham Harrell to simplify their schemes to “allow our kids to play faster,” and is intensifying competition by releasing a two-deep depth chart each Friday to deter complacency.

“I don’t want any player on this football team to be comfortable with his position,” Helton said. “He’s always fighting for a job, he’s always competing for a job.”

So the state of Los Angeles’ storied college football programs are in flux. They’re coming off losing seasons and attrition has created roster management issues for both. UCLA players insist there’s momentum after an unspectacular first year with Kelly, while USC coaches feel more of a sense of urgency.

And after two mediocre seasons, neither program has done much publicly to positively spin things forward.

Kelly, not known for caring much about recruiting classes during his uber-successful Oregon tenure, finished his 2019 recruiting class with the 53rd-ranked class by ESPN, 34 spots lower than his 2018 debut class. Offensive tackle Sean Rhyan was the only ESPN 300 signee and four-star in a class of 20.

USC’s 19th-ranked class was the worst for the Trojans in modern recruiting history. It had seven ESPN 300 members, but after losing McCoy, USC finished with just five players ranked inside the top 10 at their respective positions.

The lack of recruiting success puts more of a strain on both coaches in their 2019 rebuilds. It’s a make-or-break year for Helton, who enters with a 26-13 record since shedding the interim tag after the 2015 season. UCLA is trying to make some sort of second-year jump, as players get more comfortable with Kelly’s system, coaching and approach.

UCLA needs more talent and is fighting depth issues with low scholarship numbers. USC has its own depth issues, especially at receiver and in the secondary, but it’s also fighting the real possibility of a complete coaching overhaul if things sour again in 2019.

Neither school is expected to be a national — or maybe even a Pac-12 — power in 2019, but the hope in Hollywood is that the pieces are there to start the turnarounds.

“I understand how great USC is and my experiences from the past show me how great it can be,” said new USC secondary coach Greg Burns, who was on staff in 2003 and 2004 during the Pete Carroll glory days. “All I’m trying to do is make sure these guys know it’s possible to happen again.”

Getting back on track can be a lot faster with the right quarterback, and, for now, advantage UCLA. Sophomore Dorian Thompson-Robinson is the favorite to win the job after starting in seven of the 10 games he played in last year. It was a mixed bag for Thompson-Robinson last year, but he’s more confident and more vocal this spring.

So far, his passes have a little more zip and accuracy to them. He’s taking the majority of first-team reps in a four-man competition that’s really more of a formality. Thompson-Robinson has had more command in the huddle, with teammates seeing him become a real leader for the Bruins.

“I get in the huddle now and all eyes are on me,” said Thompson-Robinson, who called the Bruins “my team now.” He added, “Everybody’s focused and paying attention.

“I still have that look-over-my-shoulder factor on me, but, in the end, I know I’m taking the first-team reps, I have to get comfortable with my guys and stuff like that.”

Harrell isn’t talking separation yet because he’s building from the ground up, stressing fundamentals and technique needed for his more Air Raid scheme. He’s also trying to break bad habits that might not have been “harped on as hard” in the past.

“I think they all have talent, they all can do special things,” Harrell said, “but who can consistently do what they’re supposed to do? That’s who’s going to be your best quarterback. Who does their job over and over and over?”

Success for both programs will depend on talent and attitude coinciding. So far, the Bruins have been pretty pleased with that. The biggest difference Alves has noticed from last year is that the team feels more like a unit.

“When we’re all working together as one unit, it really shows that we’re the Bruins and we can be great like we used to be,” offensive lineman Alec Anderson said.

What has entered is a healthy frustration about last year, Jinks said, which helps.

“They’re competitors,” Jinks said. “This is the best of the best. This is SC and they’re elite athletes. They’re a little chippy about last season, I promise you that.”

Restoration projects have begun in LA, and while it’s early, it’s clear that both programs have a ways to go before climbing back to national relevancy. Kelly certainly has more leeway in Westwood, but spring is undoubtedly crucial for the trajectory of both programs.

For Helton, he’s having to rebuild faster and coach smarter. He understands the pressure that’s on him, but he also thinks his new approach has his team moving in the right direction.

“I think we’re as talented as anybody we’ll play next year, at least equivalent, if not better,” Helton said. “We’ve learned from our past and now it’s time to focus on our future.”