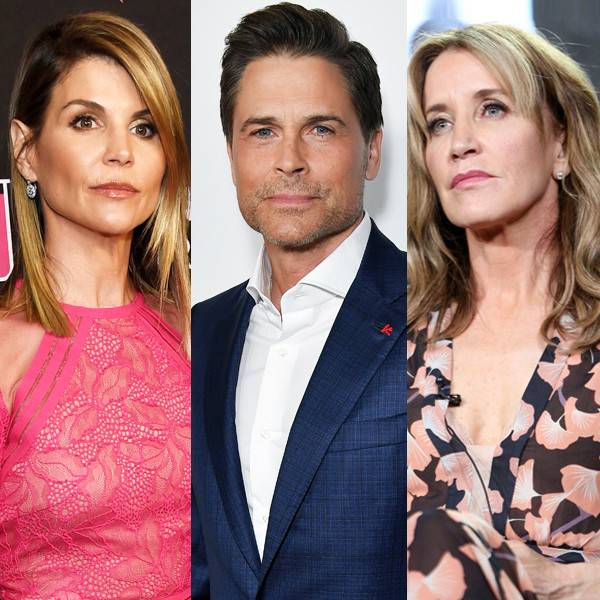 If there was a class in throwing shade, Rob Lowe would have passed.

Earlier today, news broke that Felicity Huffman and Lori Loughlin are among the 40 individuals who have been charged in connection with an alleged college entrance exam scheme.

Court documents obtained by E! News show that both actresses have been charged with conspiracy to commit mail fraud and honest services mail fraud.

While both parties are staying quiet on the allegations, Rob’s son John Owen Lowe spoke out on social media.

“I studied for MONTHS for the SAT. Twice, sometimes three times a week. Tons of practice tests. Ended up taking the SAT multiple times as well. College apps were no joke… the amount of stress kids put into that to potentially lose a spot to someone unfairly is horrible,” the Stanford University grad shared on Twitter. “And let me say: I’m incredibly grateful that I had the privilege and opportunity to have a tutor and to afford practice test programs. A lot of kids don’t. And to think of them losing their chance at their dream school to someone undeserving is really, really gross.”

“Still proud of this achievement,” he wrote with a photo from graduation day. “Happy for everyone out there who earned their accomplishments…and really sad for those who were never allowed the opportunity.”

When Rob saw his son’s messages, he decided to RT one message with an added caption. “Very proud of my honest, hardworking sons,” the actor wrote.

Ultimately, the Parks and Recreation star isn’t the only famous parent sounding off on today’s scandal.

Bethenny Frankel was outspoken on Twitter and said she was “confused all around.”

“The kids know. If a kid isn’t smart enough to know their leg isn’t broken or they don’t take crew or that it’s not their bar mitzvah that day, they should be applying to bubblegum University,” the Skinnygirl CEO shared. “Rich parents further protecting the kids. Ok I’ll stop… maybe.”

U.S. Attorney’s Office for the District of Massachusetts told E! News Tuesday morning that Lori has not been arrested. She is currently out of the country but is flying back to Los Angeles this afternoon.

As for Felicity, she was one of 13 defendants taken into custody this morning in the Los Angeles area. She is expected in court later today.