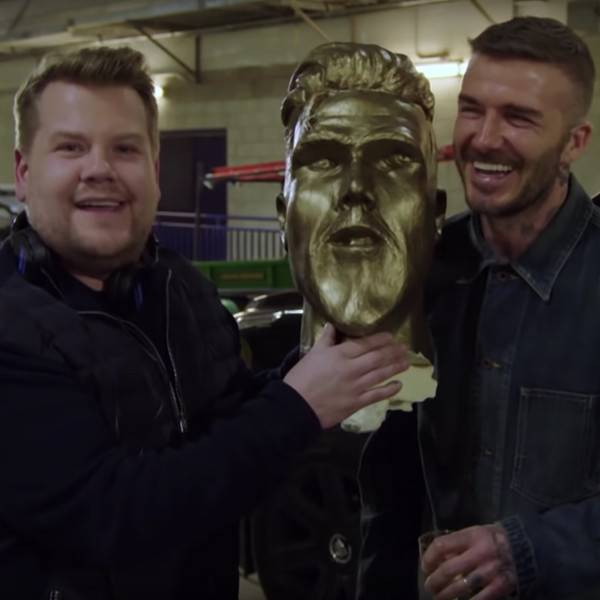 The TV host pulled an epic prank on David Beckham for Monday’s episode of The Late Late Show.

Earlier this month, the LA Galaxy kicked off its 24th season by unveiling a statue of Beckham, who played for the team for six seasons. Before the big reveal, Corden decided to have a little fun with the soccer star by switching out the real statue for a fake one that was a “little less flattering.”

To pull off the prank, Corden’s props department created a phony figure that was both “realistic” and “absolutely terrible.” He even asked his team to put a bodacious bum and prominent chin on the piece. After two months of hard work, the team brought the statue to Dignity Health Sports Park in Carson, Calif. to unveil it to Beckham. But the stunt didn’t end there. Corden also hired a bunch of actors to annoy Beckham before the big reveal and placed a bunch of hidden cameras around the space. In addition, he had an LA Galaxy camera crew follow Beckham under the guise that it was all for online content.

“You know, it’s a special moment that I’ll be able to share with friends, family. So, I’m excited,” Beckham said before the big reveal.

Clearly, the unveiling didn’t go as Beckham had planned. After dealing with the actors’ annoying antics, he was forced to watch a career highlight reel that included a few less than stellar plays. Of course, the biggest pain point was when Beckham finally saw the work of art.

“It’s slightly different than what it was when I saw it in Chicago, though,” he said.

“My wife’s coming over. It’s lucky my kids are not coming over,” he said. “Because if my kids were to see this, I think they’d just cry—to be honest.”

Then, a forklift moved the statue and dropped it—shattering it into several pieces.

“You’ve probably done me a favor there,” Beckham said.

Watch the video to see the hilarious stunt.