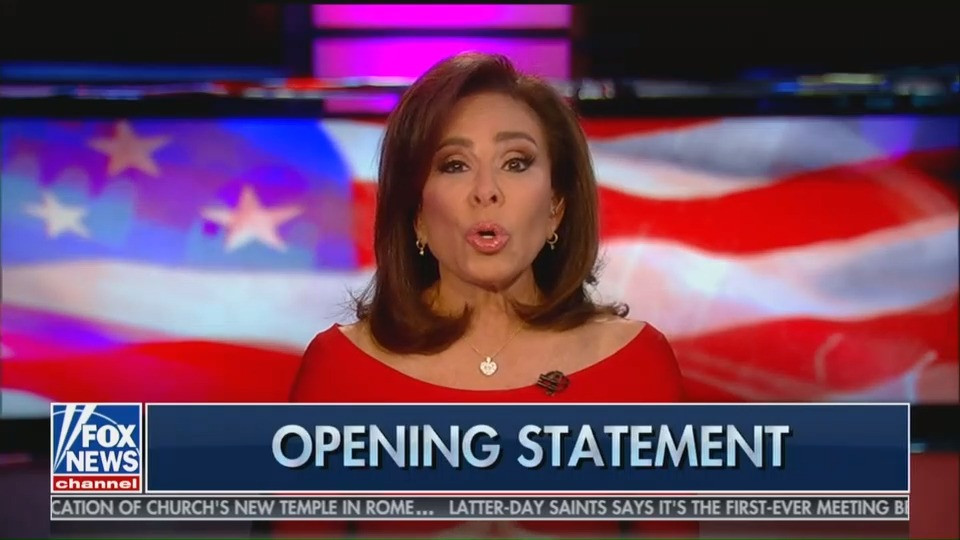 Two Fox News hosts are under fire for bigoted comments that came to light this weekend: Jeanine Pirro for her suggestion that Rep. Ilhan Omar (D-MN) is a disloyal American because she wears a hijab and Tucker Carlson for unearthed racist and misogynistic comments he made previously on a shock-jock’s radio program.

At least two advertisers told ThinkProgress this week that they would drop their advertising on Justice with Judge Jeanine, as a result of those comments. Others, however, have said they will continue running ads on the two programs.

Pirro made her remarks during Saturday night’s episode of her weekly program. “Think about it: Omar wears a hijab,” she said. “Is her adherence to this Islamic doctrine indicative of her adherence to Sharia law, which in itself is antithetical to the United States Constitution?”

The comments sparked immediate backlash from those who believed Pirro’s comments were Islamophobic and discriminatory, and Fox News eventually issued a statement saying it “strongly condemn[s]” her comment.

Media Matters this week also released audio of Carlson’s previous comments on host Bubba the Love Sponge’s syndicated radio program. In them, he questioned the need for rape shield protections, whether adults having sexual relationships with minors was really that bad, compared Iraqi citizens to “semi-literate primitive monkeys,” and questioned whether some racial minorities were even human.

Carlson has since doubled down, claiming the backlash that ensued following the release of those audio recordings was manufactured outrage from “leftist mob[s]” and suggesting his comments were comical.

ThinkProgress reviewed the commercials from Saturday’s episode of Justice with Judge Jeanine, as well as its late night rerun. It also examined the advertisers on Friday’s episode of Tucker Carlson Tonight. Each of the 60 companies that aired commercials during those hours were contacted to ask whether they would continue advertising on the two shows, in light of the controversy.

Allergan was the first to respond in the affirmative, with a spokesperson stating in an email that the company would “not be advertising on [Justice with Judge Jeanine] moving forward.” The company’s ad for Botox Cosmetic had aired during Saturday’s show.

A spokesperson for GreatCall, which sells mobile technology and services for seniors and ran a spot for it’s Jitterbug Flip phone during Pirro’s re-broadcast, also said they have pulled advertising from the show.

Asked about an ad on Pirro’s show for its Ozempic insulin brand, a spokesperson for Novo Nordisk responded, “We advertise across many cable networks to raise awareness of our medicines and the disease they treat. We respect each person’s right to express their thinking and beliefs, however, we are reevaluating our advertising on this program at this time.”

However, others have insisted they will continue marketing their products on the two shows, despite the controversies.

“I am not changing my advertising,” MyPillow CEO Mike Lindell said in an emailed statement. “I make all of my advertising decisions based on what is best for MyPillow, my customers and my employees.” MyPillow ads air frequently on both programs.

A spokesperson for Mitsubishi Motors North America, which advertised during Pirro’s show, also said they would not commit to changing the company’s ad buys.

“Our advertising media spend is determined based on demographics and psychographics, not politics. Our strategic marketing intent is to share our key product news with consumers through a variety of media channels. We will monitor the situation and adjust our advertising if necessary.”

A spokesperson for WeatherTech, which also advertised on Pirro’s show this weekend, responded similarly on Monday, saying the company “places its advertising according demographics that most fit the target consumer market for our automotive and pet accessory products.”

“The content of those shows maybe opinion based and in America to have an opinion is a constitutional right,” they said. “As we are an American based company, who employs 1500+ American workers and, whenever possible, uses American sourced raw materials we respect the rights stated in the U.S. Constitution.”

Zona Plus also refused to comment on its advertising on Pirro’s show.

Other companies running ads that did not immediately respond to ThinkProgress inquiries included:

Some companies have previously suggested they might reconsider advertising on Carlson’s show. In December, after Carlson claimed immigrants were making America dirtier, Samsung representatives told The Hollywood Reporter that the company did not have “any advertising planned at this time, for this program.”

The company, however, ran ads for its Galaxy phones on both programs over the weekend.

This story will be updated as additional companies respond.