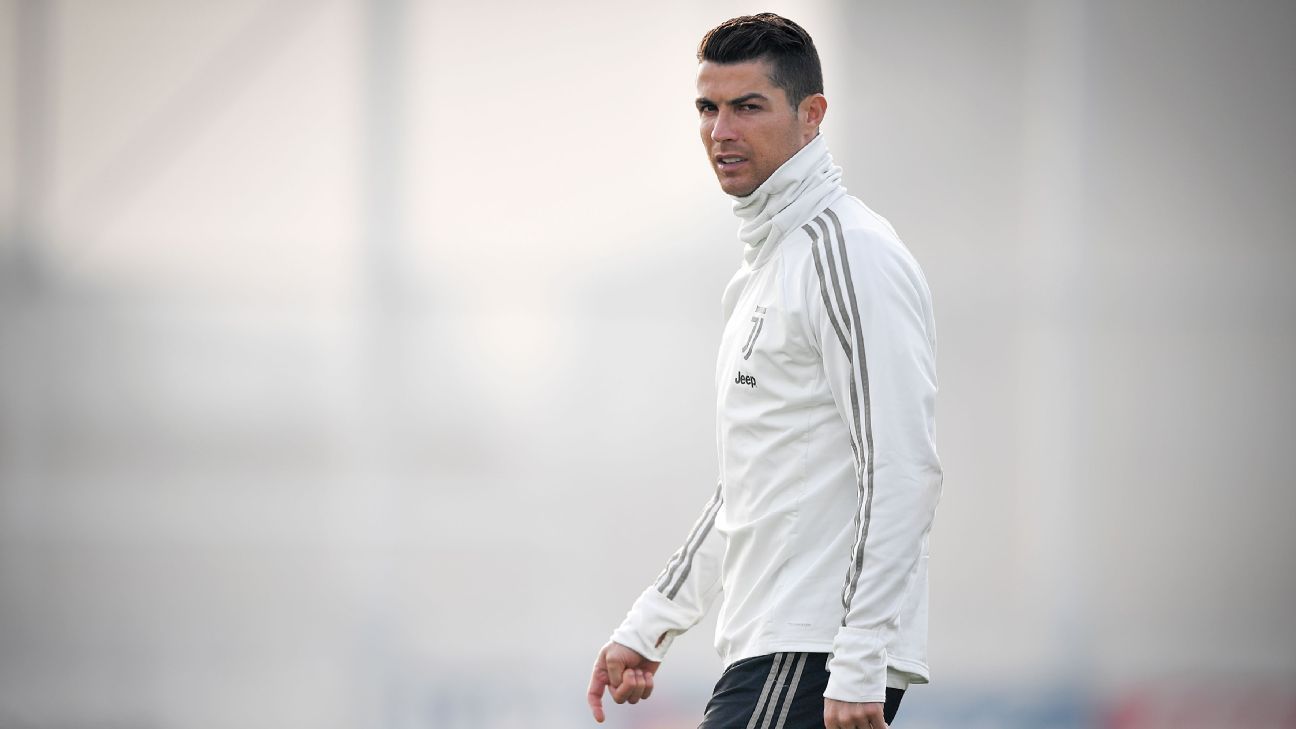 The least shocking thing about our fourth annual World Fame 100 issue is the athlete who ranks No. 1.

Cristiano Ronaldo, who has topped our list every year, has more followers on Twitter than the NBA, NFL, MLB and NHL combined. He currently has 156.3 million Instagram followers, which is 9.6 million more than Ariana Grande and 100 times more than Tiger Woods. Ronaldo is so famous that Madrid’s Museum of Wax displays a life-size figure of him, and he’s so aware of his own fame that he sends a stylist there monthly to keep the statue’s haircut up-to-date.

Over the past year, Ronaldo’s celebrity has proved impervious even to serious criminal allegation. Last September, Las Vegas police reopened an investigation into an accusation by former model and teacher Kathryn Mayorga, who says Ronaldo sexually assaulted her in a hotel room in 2009. (For more on the case, see page 70.)

The emerging details of the case haven’t slowed Ronaldo’s transition to playing for Juventus or his plans to expand his Pestana CR7 hotel chain into New York this summer.

Ronaldo’s fame, then, appears to be secure, despite anyone’s moral objections. So how did we arrive at his ranking and those of the other athletes on our list? We started by looking at 794 of the biggest names in sports. For each of them, we examined three factors: social media following, measured on the platform where he or she is most popular; online searches, according to peak and average Google Trend scores in 2018; and endorsement income. Working with ESPN’s Stats & Information Group, we then improved the analytical model we have developed to blend all of this data into one score that measures overall fame.

Still craving the spotlight? Check out our full list of the world’s 100 most famous athletes.

No. 1: Cristiano Ronaldo: In the spotlight, out of reach

No. 63: One World Under Anthony Joshua

No. 99: Bryce Harper is One Very Big Deal

Rising star: The One and Only Naomi Osaka

You will find some surprises: UFC lightweight champion Khabib Nurmagomedov ranks No. 15, the highest of anyone who didn’t crack the Fame 100 in 2018. Phil Mickelson is at No. 26 despite a meager social media presence, thanks to $37 million in endorsements last year, fifth-most among all athletes. There are 37 soccer players, 16 basketball players and 11 cricketers on our global list yet just one apiece from baseball (Bryce Harper), Formula One (Lewis Hamilton) and swimming (Olympic gold medalist Sun Yang).

You’ll also find that our index teaches some basic lessons about the nature of fame. For instance, fame isn’t virtue. It’s hard to say who the first self-created superstar was — Babe Ruth? Machiavelli? The serpent in the Garden of Eden? — but would-be celebrities have been figuring out for a long time that notoriety can be its own reward. Athletes become famous for their excellence, sure, but also for their arrests and charitable causes and contract disputes and love lives. A list such as the World Fame 100 isn’t about the athletes who are best at their jobs; it’s about who draws the most eyeballs.

Maybe that should be obvious, but modern media machines create sports celebrities so instantly and saturate our attention with them so thoroughly that we often assign outsized value to their every act — and to their rankings on lists — as though their notoriety is our reward.

“We risk being the first people in history to have been able to make their illusions so vivid, so persuasive, so realistic that we can live in them,” historian Daniel Boorstin wrote in his landmark book “The Image” in 1962. “The celebrity is a person who is known for his well-knownness.” And he never even met LaVar Ball!

The list also teaches us that fame endures. Athletes bond with fans early and intensely. And though it’s easier than ever for anyone to grab their 15 minutes, sports stars build global fame by stirring our admiration (or hatred), curiosity and envy over years of engagement, to the point where companies want to pay them for promoting sneakers or cars. Those are long-term ventures that don’t fade quickly. The top 20 athletes in the Fame 100 are an average age of 31.6 and have been pros for 14.4 years. A dozen of them were in the top 20 of the first Fame 100. It’s a pretty stable group.

But you know what you won’t find on our list? More women. Despite measuring an expanded universe more accurately, this edition of the list contains just three women: Serena Williams (No. 17), Maria Sharapova (No. 37) and Sania Mirza (No. 93). How is that possible? Partly because of the consequences of the first two lessons: It’s hard to crack the boys club of supercelebrity. But also because of a third point: Fame is a reflection of the male gaze.

A long line of research has found that women face particular barriers when trying to build identities as athletes, including how persistently fans and sponsors care about traditional femininity and physical attractiveness. As a result, “women have to do more than perform well in their sport to build a brand,” in the words of a study led by Jami Lobpries, VP of the United States Specialty Sports Association, published in Sport Marketing Quarterly in 2018.

Case in point from our data: The correlation between how male golfers rank in our spreadsheets and how well they performed on the PGA Tour last year is 0.38, a moderate connection and about what you’d expect, given that recent excellence on the course is an important driver of fame. For women, however, the correlation between performance and fame is actually negative (minus-0.26). That doesn’t necessarily mean playing better golf makes a woman less famous; it’s that other variables mean more to the fans and sponsors who make women in golf famous. Sharmila Nicollet is 861st in the latest Rolex world rankings, but she has 446,000 followers on Twitter, among the highest of the 13 LPGA players we sampled, and 206,000 on Instagram, where posts of her elite swing sit alongside shots of her modeling fitness gear. She played her first pro tournament in the U.S. (the 2017 ShopRite Classic) by winning a sponsor’s exemption that was based on an online poll.

In 2007, photos of record-breaking high school athlete Allison Stokke went viral — one blog posted them with the headline “Pole Vaulting is Sexy, Barely Legal” — and without her consent or intention, Stokke became an internet sex symbol. More than a decade later, Stokke, still in the public eye after a career as a pro athlete and fitness model and an engagement to golfer Rickie Fowler, has more than half a million Instagram followers, three times as many as Breanna Stewart, reigning WNBA MVP, WNBA champion and three-time college basketball national player of the year.

“Women often have to deal with what we call the ‘female/athlete paradox,'” says Ted Peetz, professor of sports administration at Belmont. “Promotional campaigns sell their sexuality and end up undermining their athletic accomplishments. The fact that Nike’s ‘Dream Crazier’ campaign has gone viral just shows how much it’s different.”

Now consider the athlete who narrates that campaign and who has managed to forge exceptions to each of the rules of fame: Serena Williams. In 2013, when The Mag studied the factors that determine off-field income (“Now a Word From Our Sponsors,” June 24, 2013), Williams was a glaring outlier. She was making about $9 million a year from endorsements, less than half of what the data suggested. Our analysis showed that after adjusting for factors such as the sport played, performance and social media presence, an athlete’s earning potential wasn’t hurt by being black or by being a woman — but apparently it hurt to be both.

Fast-forward six years, and Williams has become the most famous woman athlete on the planet and has doubled her annual take from endorsements. In that span, she has performed at an even higher level on the court, vaulting into GOAT-among-GOATs discussions. She was dogged by injuries and controversies that made her critics look like bullies (like when the French Open banned her catsuit). She also got married and gave birth to a girl. Williams, in other words, has managed to embody dominance, vulnerability and motherhood all at once. And when you can be everything to everyone, you can transcend fame’s usual limits. “There is always one woman who becomes the prism through which all concerns about modern women are refracted, whether it’s about sexuality, motherhood, social media or eating,” Hadley Freeman, a columnist for The Guardian, wrote last autumn. “Now it is the turn of Serena Williams.”

Even so, Williams has never placed above No. 12 on this list. Which means that for her or any woman athlete to rank significantly higher, the world itself will have to change.

Ultimately, fame is backward-looking, a quality gauged by games already won, thrills already provided and gossip already generated. Like MVP votes or award shows or stock prices, fame sums up opinions of the public and influentials without providing many hints about future surprises. Its distribution evolves only when a singular figure such as Williams compels the public to view an athlete in a different way or when new generations of fans and executives gain sway.

Look at Naomi Osaka. She beat Williams in a dramatic U.S. Open final and became 2018’s breakout star. But tennis doesn’t have fans in the billions-with-a-b (like soccer or cricket) or huge spikes in online traffic from one-time events (like boxing or MMA). Osaka is adding 80,000 social media followers a month, which is impressive but not yet enough to get close to the constellation of the world’s most famous stars.

She could easily make a future Fame 100, as could Simone Biles or Chloe Kim. Their rise foreshadows a younger, more female, more globalized sports world, with opportunities less tied to old conventions and fame aligned more closely with excellence. But it’s going to take a while.