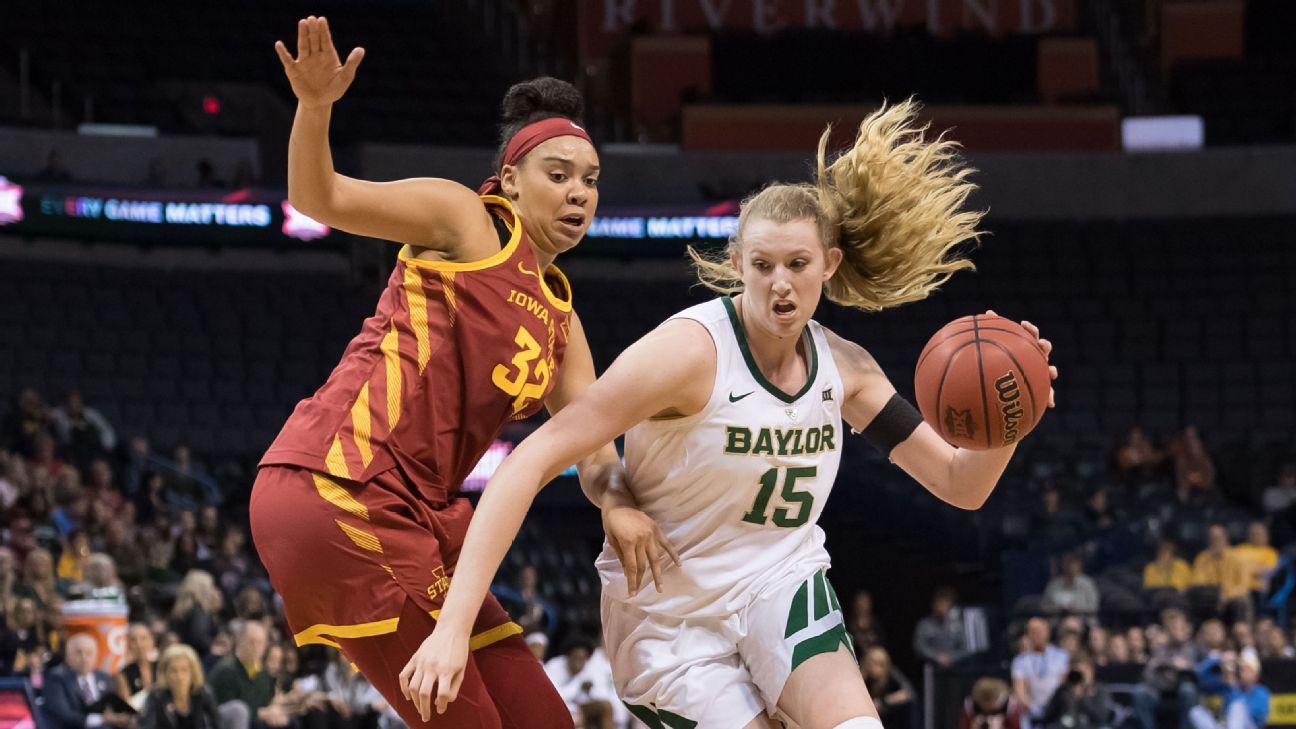 OKLAHOMA CITY — Baylor’s dominance has made the Big 12 women’s basketball tournament feel like “Groundhog Day” for a while now. Iowa State did all it could to change the movie’s ending Monday night, but the Lady Bears weren’t having it.

Baylor won the title for the ninth time in the last 11 years, holding off the Cyclones 67-49 and sending the Lady Bears into the NCAA tournament at 31-1 with a No. 1 seed guaranteed.

Baylor has made the Big 12 final a snooze-fest in the past by being just too good. But Iowa State — which has not won the Big 12 tournament title since 2001 — played with a fire on Monday that put the Lady Bears on their heels a few times.

That changed in the fourth quarter. Like a giant sledgehammer that keeps pounding, Baylor took control — how many times have we seen this? – outscoring Iowa State 19-5 and turning a close game into a rout.

The Lady Bears got a lift off the bench from players like NaLyssa Smith, a freshman who looks like a superstar in the making, and Moon Ursin, a gritty sophomore guard grieving the loss of her grandfather a few days ago. Smith finished with eight points, while Ursin sparked Baylor’s perimeter defense.

Chloe Jackson, a grad student in her first year as Baylor’s point guard, battled through some struggles on defense to lead the Lady Bears’ backcourt with 16 points.

And ultimately, Baylor’s dynamic post duo, Kalani Brown and Lauren Cox, carried the Lady Bears across the finish line. Brown seemed tentative at times, but once she got her motor running, the 6-foot-7 center was tough to stop. She finished with a team-high 17 points, plus seven rebounds and was the Big 12 tournament MVP.

Cox is the feistiest of the Lady Bears, the country’s former No. 1-rated recruit who has learned to balance aggression and competitiveness with smart play. She’s one of the nation’s top post defenders, and has improved her playmaking skills to go along with her scoring prowess. She had 14 points, eight rebounds, three assists and three blocked shots and was on the all-tournament team.

The Lady Bears completed their second consecutive perfect slate in Big 12 play; their only loss this season was in December at Stanford, which won the Pac-12 tournament Sunday.

The only interruptions in Baylor’s Big 12 tournament celebrations in the last 11 years came in 2010, when Texas A&M won title, and in 2017, when West Virginia prevailed. The Aggies have since relocated to the SEC, and no team has stepped forward to consistently challenge the Lady Bears.

Behind Big 12 player of the year Bridget Carleton, Iowa State did the best it could. The Cyclones, who were appearing in their sixth Big 12 final, and first since 2013, are 25-8 and look to host the early rounds in the NCAA tournament with a No. 4 seed. Carleton had 13 points and six rebounds, while Alexa Middleton led Iowa State with 18 points. Both were on the all-tournament team.

Mulkey was hired at Baylor before the 2000-01 season, and has since won two national championships. The last was in 2012, and the Lady Bears haven’t been back to the Final Four since.

If they go this year, it will be on the strength of Brown and Cox, but also the cohesive unit around them. They’re the No. 1-ranked team in the country, and they’ve been through the disappointment of the NCAA tournament not going the way they hoped for a while now. They’ve talked in the past few years about changing the script, but it hasn’t happened.

They’re about to get another chance. And if they play like they did in Monday’s fourth quarter, a trip to Tampa could be the reward.