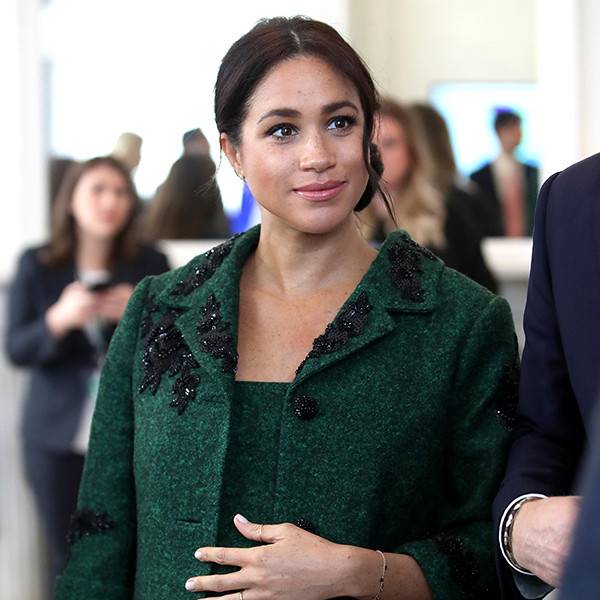 Donning an emerald coat embellished with black floral appliqués by Erdem, the expectant Duchess of Sussex stepped out alongside her husband Prince Harry for a Commonwealth Day youth event in London.   As they mingled with young Canadians inside Canada House, some noticed the mother-to-be was not wearing the three-diamond engagement ring Harry popped the question with nearly two years ago.

It has been suggested that the engagement ring previously appeared to be loose on the former Canadian resident, who was wearing only her wedding band on Monday.

Last week during a surprise appearance on stage, Markle was photographed at WE Day with the diamonds not facing out on her ring finger, according to a report.

Whatever the case, the royal carried on with her public engagement today sans the ring and surrounded by Canadian youngsters participating in the tradition of making maple taffy.

The two soon-to-be parents beamed as they also chatted and shared laughs with older Canadians living in the U.K. and working in fashion, the arts, business and academia.

The duchess was fittingly dressed for the occasion, sporting the eponymous label Erdem. Designer Erdem Moralıoğlu was born in Montreal and launched the brand in London.

This time last year, the not-yet-married duchess attended the customary Commonwealth Day service, marking her first official event with Queen Elizabeth II. Now, a year later, the two are waiting on their first little one.