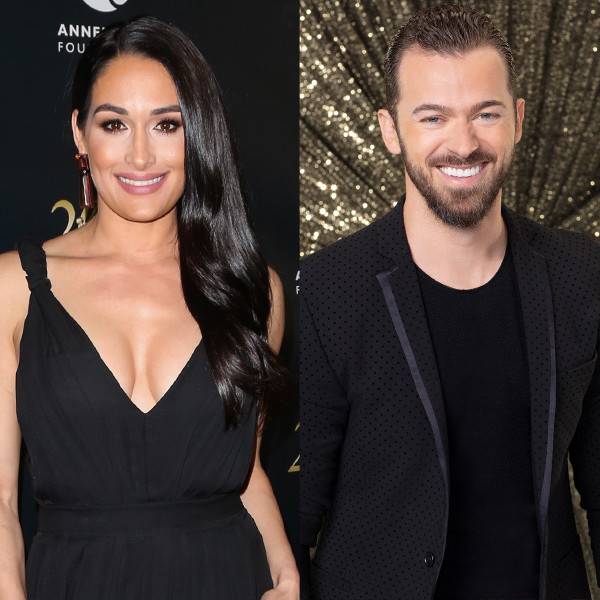 There was no side-stepping this one for Artem Chigvintsev.

The 36-year-old professional dancer appeared on Nikki Bella‘s Instagram Story and Instagram Live videos on Sunday night and was surprised to learn that he would be helping her live tweet tonight’s episode of Total Bellas.

Just minutes before the episode, Nikki tweeted a video of herself explaining to the camera that she would be active on social media during the episode and she’d be getting help from “a friend” too.

Artem and Nikki apparently spent the day together, too. They had a “Sunday fun day” together, which she talked about in her Live video.

“I have a special guest who had a really fun Sunday fun day with me. He’s gonna tell you to also tune in to Total Bellas,” she said.

Their Sunday fun day included non-alcoholic beer and some ramen. Nikki, however, explained that she’s “picky” about restaurant ratings and only eats at establishments that received an “A” grade. But she broke her own rule today with Artem and they went to a restaurant that had a “B” rating.

“Doesn’t that mean the kitchens have rats?” she inquired.

Despite the “B,” she and Artem had a great meal and she even admitted that it was “really good.”

The 35-year-old professional wrestler and the Dancing With the Stars pro have been spending a decent amount of time together as of late. The two of them hung out on Saturday as well and enjoyed a leisurely lunch date together.

A source told E! News that they “seemed happy and into each other” during their lunch date at Joan’s on Third in Los Angeles, where they dined on salads and “leaned in to talk” over lunch.

“She made goofy faces at him and used her fork to tap his nose playfully. At one point she got up and leaned across the table to kiss him,” the insider said. “When they left he wrapped his arm tightly around her and she grabbed his hand. He opened the car door for her and helped her get in.”

The two of them recently had a romantic date night in Beverly Hills, too. Another source told E! News that they “sat together for several hours drinking and were smiling a lot” during their dinner date at Wally’s restaurant. Nikki reportedly “looked really happy.”

Artem and Nikki sparked dating rumors earlier this year, but neither one of them has publicly commented on it. She shared with E! News in December that she was “enjoying being single” but her dating life was “not going well.”

She split from her fiancé John Cena in July and explained to Jimmy Fallon at the end of January, “I don’t want to say playing the field because I’m not like that, but like I’m having fun going on dates with a bunch of people.”

Artem and Nikki were first linked—not romantically, but athletically—back in 2017 when they were partners on season 25 of DWTS.

We know it takes two to tango, and apparently two to tweet, too.