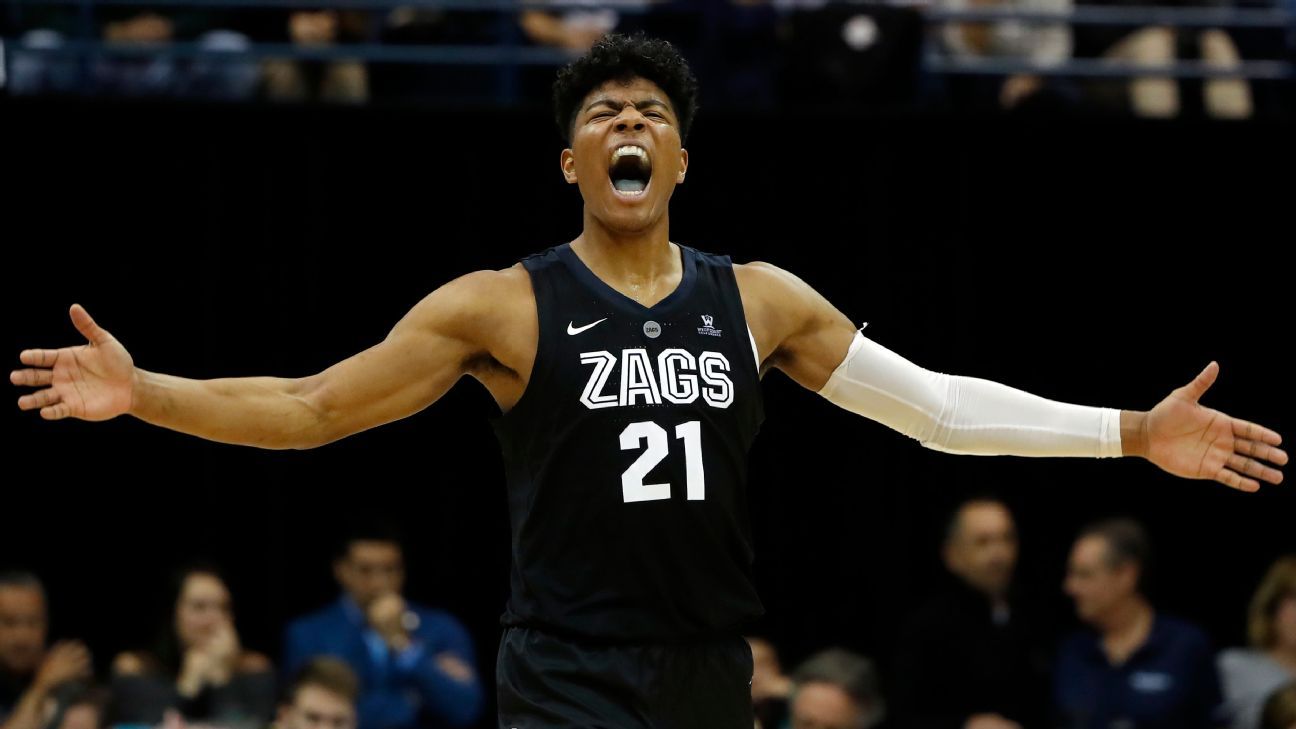 The final weekend of the regular season clarified some things for Selection Sunday while also muddying certain situations. There are just six days until Selection Sunday and plenty of stuff to figure out before then. So what’s at stake over the next week when it comes to the top-four seed lines?

Final two 1-seeds: It’s hard to imagine Virginia and Gonzaga losing their grip on the top two 1-seeds. Gonzaga has a win over Duke and hasn’t had a game within single-digits since mid-December. Virginia’s only two losses this season came to Duke and the Cavaliers are tied with Michigan State for the most Quadrant 1 wins in the country.

The final two spots will likely come from some combination of North Carolina, Duke and Kentucky, with Tennessee and Michigan State as potential dark horses. Duke’s fate depends on Zion Williamson‘s availability, while North Carolina’s sweep of Duke and December win over Gonzaga puts them in a good spot. Kentucky has beaten Carolina and Tennessee, but either would have to win the SEC tournament or get some help to stay in its spot. If Michigan State or Tennessee wins its conference tournament, they have a shot — especially since the Spartans have 11 Quadrant 1 wins and swept Michigan.

Overall 1-seed: Can Gonzaga jump Virginia for the top spot if the Cavaliers lose in the ACC tournament (we’re assuming it’s unlikely the Zags fall in the WCC tournament)? The Bulldogs don’t have the résumé of Virginia, but they’ve looked outright dominant for three months. If Virginia loses early in the ACC tournament, Gonzaga has a chance. A title game loss and it will be close.

Final 2-seed: The seven aforementioned teams seem pretty comfortable on the top-two seed lines, barring a surprising run from an unexpected candidate. But there’s still a 2-seed up for grabs. LSU has it for now, but Michigan can get back in the mix if the Wolverines make a Big Ten tournament run. Texas Tech is another candidate, if the Red Raiders combine their Big 12 regular-season title with a tournament title. Can Houston be in play? What about Purdue with a Big Ten tourney title?

Back-end of the top-16 (four seeds): Aside from the 16 teams we have ranked, Virginia Tech and Maryland are right there. Can the Hokies or Terps fight their way to the top-four lines? For Tech, the return of Justin Robinson would likely be necessary. As for Maryland, it’s going to take a run that includes a win over Michigan, Michigan State or Purdue.

Who’s the sleeper? Every season, there’s a team that jumps up two or three seed lines after a deep run during Champ Week. Michigan jumped all the way up to a 3 after winning the Big Ten tournament last year in New York. Who’s the team to make things interesting on Sunday? One team to watch could be Auburn; the Tigers won four in a row to end the regular season, including a victory over Tennessee. Their résumé is continuing to look more attractive, especially their NET and efficiency metrics. Will a Big East team — Villanova or suddenly struggling Marquette — be able to make a case?

By the way, this is the final edition of this season’s Power Rankings. Thanks for reading — and enjoy the next four weeks!

De’Andre Hunter will likely get more postseason award consideration than Ty Jerome, but Jerome is going to be the guy the Cavaliers look to in big postseason moments. The junior point guard is not afraid to take — and make — big shots and he consistently makes the right decision. He’s also playing excellent basketball down the stretch. Over the past two games against Syracuse and Louisville, Jerome totaled 40 points and 20 assists.

Gonzaga’s second-round NCAA tournament opponent might be the first time in more than three full months that the Bulldogs will be in a single-digit game. The Bulldogs’ past 20 games — all wins, of course — have been by double-digits and only two or three were even competitive in the second half. Will that end up hurting the Zags in the tourney? It’s unlikely, but it’s still something worth watching if an early-round game is close down the stretch.

Luke Maye received the preseason attention and Cameron Johnson has had a breakout senior season, but Coby White can make a strong case as the best freshman guard in the country. He came in needing to replace Joel Berry, but White’s scoring and shooting has provided a dimension the Tar Heels have been missing for a couple seasons. He has hit 20-plus points in three of his past four games, and is tracking as a one-and-done prospect.

They hit some snags in the road along the way, but the Wildcats are in position to earn a 1-seed — similar to projects at the start of the season. John Calipari’s team still has its issues, but the emergence of PJ Washington as a go-to-guy and Tyler Herro and Keldon Johnson as consistent scorers have helped. The key will be the return of Reid Travis; his physicality and experience down low are a big boost to the frontcourt.

Duke dropped to 3-3 without Zion Williamson on Saturday, which is the reason they drop from 1-seed territory. The Blue Devils are simply not a top-four (maybe not even a top-10) team without Zion, and until he returns, it’s hard to judge their resume. Fortunately, Mike Krzyzewski said after the game he expects Zion to return for the ACC tournament. If that’s the case — and Zion looks like himself — Duke could rise back up.

Tennessee is going to need Lamonte Turner and Jordan Bowden to find their perimeter shot before the NCAA tournament. In the Volunteers’ past seven games, the two guards are a combined 11-for-68 from 3-point range. Given that they rank toward the bottom of Division-I in 3-point production, Rick Barnes will need his two off-ball guards to make shots if Tennessee is to make a deep run in March.

Cassius Winston once again showed why he’s arguably the best point guard in the country, with 23 points and seven assists. The Spartans finishing tied for first despite injuries to Joshua Langford and Nick Ward (according to the school, they lost 24 games to injury among the regular starting lineup) is yet another feather in Tom Izzo’s cap. And in Ward’s absence, Xavier Tillman has filled his frontcourt shoes nicely. The sophomore is averaging 14.4 points and 7.8 rebounds in his past five games.

After a 48-hour stretch, that saw its head coach get indefinitely suspended, a starting guard held out and a starting forward injured, LSU went out and dominated Vanderbilt to earn the outright SEC regular-season title. The question will be whether they get Javonte Smart or Naz Reid back moving forward. They will need them in the postseason. This is still a supremely talented team, and having all hands on deck will limit the distractions of Will Wade’s situation.

The Wolverines still have one of the elite defenses in the country, but they’ve begun to look somewhat vulnerable late in the season. After allowing just four opponents to reach one point per possession in the first four months of the season, opponents have hit that number in three of the past four games. Part of the reason is Michigan State was the opponent in two of those games, but Michigan needs to tighten up at that end of the floor — and they also need Charles Matthews back from injury.

The Red Raiders earned a split of the Big 12 regular-season title with a road win at Iowa State, their first conference championship since 1996 when James Dickey was coaching them in the Southwest Conference and Darvin Ham was shattering backboards. Tech has now won nine games in a row heading into the Big 12 tournament — scoring 80-plus in five of its past six games along with having the No. 1 defense in the country.

Houston’s final 13-plus minutes was one of the most impressive offensive explosions we’ve seen all season. The Cougars went on a 44-22 run in the final 13:33 to hammer Cincinnati at home by 16 — and clinch the AAC regular-season championship by two games. Kelvin Sampson deserves serious consideration for national coach of the year for his job this season.

Matt Painter capped a tremendous three-month turnaround with a win at Northwestern on Saturday, clinching at least a share of the Big Ten regular-season title for the Boilermakers. Purdue started the season 6-5 after losing four starters from last season, but went 17-3 in its past 20 games. Matt Painter continues to be one of the more underrated coaches in the country.

The question for Kansas moving forward is going to be how it performs away from Lawrence. The Jayhawks went just 3-6 on the road in Big 12 play and also lost at Kentucky and Arizona State. On the plus side, they beat Michigan State, Marquette and Tennessee on neutral courts. Despite their Big 12 streak ending, there’s still enough talent — including an All-American in Dedric Lawson — to win games in March.

The Seminoles have now won 12 of their past 13 games, with the lone loss coming at North Carolina in late February. They have secured a double-bye in the ACC tournament and their depth, versatility, size and experience make them a tough team to prepare for on a short turnaround. One potential issue is their 3-point shooting; Florida State hasn’t shot 40 percent from 3-point range in a game since Feb. 5.

After starting Big Ten play 3-3, Wisconsin won 11 of its final 14 games capped by five of six to end the season — even if the Badgers blew a 23-point lead against Ohio State before winning in overtime. They now have nine Quadrant 1 wins, which puts them in a good position for a top-four seed provided they don’t suffer an early exit in the conference tournament. Khalil Iverson finished the regular season on a tear, averaging 13.5 points and 7.8 rebounds over his final six games.

The Wildcats will be the 1-seed in the Big 12 tournament. It caps a tremendous midseason turnaround for Bruce Weber and the Wildcats, who started conference play with losses to Texas and Texas Tech — and then proceeded to win 14 of their final 16 Big 12 games. On Sunday, however, Kansas State announced that Dean Wade is questionable for the conference tournament due to discomfort in his foot. Hopefully it’s not deja vu for the Wildcats, as Wade missed the Big 12 semis and most of the NCAA tournament last season.