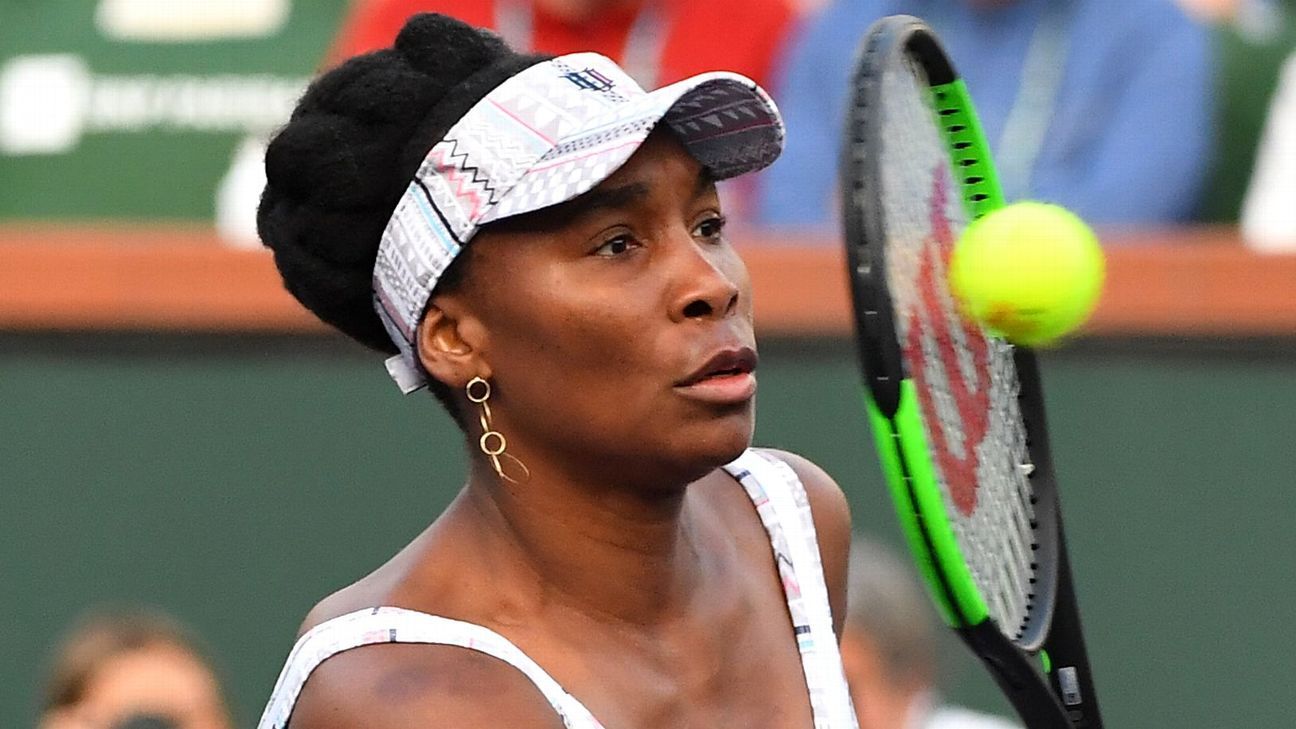 INDIAN WELLS, Calif. — We know, we know. It’s only Monday. And anyone who’s been paying attention knows the favorites are still the favorites: Roger Federer has won this tournament four times, most recently in 2017; Novak Djokovic has won three straight Grand Slams; and Naomi Osaka has won the past two Slams — both on hardcourts.

But as we enter the second week of play at the BNP Paribas Open, a handful of less-obvious players are emerging as real contenders to lift their first trophies at Indian Wells.

And don’t forget: If any of our far-too-early prognostications prove true, you read it here first.

Next match: Monday vs. Christina McHale

It might read out of place to include a seven-time Grand Slam champion on a list of dark-horse contenders for a premier mandatory title, but the catalog of obstacles standing between the elder Williams sister and her 50th career singles title is as staggering as her serve. Unseeded at Indian Wells and ranked 36th in the world, Williams hasn’t won a title in more than three years, will play only her ninth match of the year Monday night and, at 38, is the oldest player in the tournament.

But since arriving in the California desert last week, Williams has showed fire and fight. After calling a trainer late in the first set of her first-round match against Andrea Petkovic, Williams gritted out a win in three sets. In the second round, she rallied from down a set and two breaks to beat No. 3-ranked Petra Kvitova, one of the hottest players on tour and arguably Williams’ toughest opponent until the quarters, where No. 9 Aryna Sabalenka or No. 8 Angelique Kerber likely await her arrival.

“I’m definitely playing with the home crowd here, and I hopefully can continue to take advantage of that energy and momentum,” Williams said after her round-two win. “It is exciting to have everyone behind you and to feel that energy.”

Last year at Indian Wells, Williams made a run to the semis — the last time she saw the penultimate round of a tournament — but had to play through little sister Serena, who was contesting her first WTA tournament since returning from maternity leave. With Serena retiring from her third-round match against Garbine Muguruza on Sunday, Venus is now the only Williams with a chance to hoist the trophy at the end of the week.

And while no one would dare utter the “R” word around her just yet, it’s tough to believe Williams will take that plunge into retirement without first doing all she can to round out her win total with one more title. What sweet irony it would be to do it here and flip the script on her Indian Wells story.

Next match: Monday vs. Yoshihito Nishioka

What would a list like this be without a member of the ATP’s Next Gen on it? The likely culprits — Francis Tiafoe and Stefanos Tsitsipas, who had breakout performances at the Australian Open in January — were both upset here early, freeing up the spotlight for 18-year-old Auger-Aliassime, who ended Tsitsipas’ run in straight sets on Saturday.

“I always have a big belief in myself,” Auger-Aliassime said after the match. “I go for my shots. I’m aggressive. And if I can keep doing that and be even more solid and consistent, I think it will bring me to high levels.”

One year ago, Auger-Aliassime beat fellow Canadian Vasek Pospisil in the first round and became the youngest match winner at Indian Wells since 1990. So far this year, he has made the final of the Rio Open and advanced to the quarterfinals in Brazil, both clay tournaments. “I want to win as much as I can,” said Auger-Aliassime, who might have to play through another Canadian, No. 13 Milos Raonic, in the quarters.

“I don’t know what my limits will be, but I try to work hard every day to go as far as I can,” Auger-Aliassime said. “I want to feel all the emotions that I can feel on these courts, win as many trophies as I can. There is no really limits for me.”

Next match: Monday vs. Miomir Kecmanovic

After winning his first title in Rio in February, Djere gave an emotional victory speech in which he dedicated his win to his parents, both of whom he lost to cancer.

“I want to dedicate this trophy to my parents,” Djere said after defeating Auger-Aliassime 6-3, 7-5 in the final. “I lost my mom seven years ago, so I want to dedicate this one to her. And also, to my dad. I lost him two months ago. My parents had the biggest impact on me, and because of them I am who I am today. I hope they’re watching me now.”

Needless to say, Djere is playing inspired tennis. During his Rio run, the 23-year-old Serbian earned his first win over a top-10 player when he beat last year’s French Open runner-up, Dominic Thiem. He then made the semifinals in Sao Paulo before boarding a flight to Indian Wells, where he was awarded a wild card into the main draw and won his first match over Argentine Guido Andreozzi in straight sets.

“I don’t know many tennis players who went through these things,” Djere said in Rio. “I want to be that guy who inspires others and shows that you can still be successful.”

Next match: Tuesday vs. Kiki Bertens

Doesn’t matter how it happened: the two-time Grand Slam champion and former world No. 1 is on to the fourth round, with arguably her toughest opponent in her rearview. Muguruza dropped the first three games of her third-round match against Serena Williams, but then grabbed the momentum and won the next six games and the first set.

“I had to adapt a little bit my position in the court, the way I was hitting, and it took me a few games to do it,” Muguruza said afterward. “Once I did, I felt much more comfortable to be able to release my tennis.”

Of course, Muguruza had little opportunity to continue testing those adjustments. The match lasted only one more game, as Williams was forced to retire with a viral illness, ending hopes for an all-Williams final and sending the 25-year-old Spaniard to a fourth-round match against No. 7 Bertens. If she wins her next two matches, Muguruza could face world No. 2 Simona Halep in the semis, a challenge she said she is up for.

“I look forward for all the matches,” said Muguruza, ranked No. 20 in the world. “Right now, the more the time goes by, the more that anybody can beat anybody. It doesn’t matter the ranking.”